Michigan Wolverines punter Blake O'Neill was having a GAME. After UM's opening drive against rival Michigan State stalled, O'Neill launched an 80-yard bomb (!!) that was downed at MSU's 2-yard line. Throughout the back-and-forth game between No. 7 Michigan State and No. 12 Michigan on October 17, 2015, O'Neill punted seven times for 312 yards, including three punts inside the 20 -- it was the best statistical game of his lone season in Ann Arbor, Michigan.

However, O'Neill's eighth punt attempt is the only one college football fans remember.

It was fourth-and-2 from the Michigan 47-yard line. The Wolverines led 23-21 with 10 seconds to play in the fourth quarter. Head coach Jim Harbaugh sent his punt team out with two things in mind: Don't let the Spartans return the kick, and do not, under any circumstances, mess up the snap.

Long snapper Scott Sypniewski fired the ball back, but it ended up around O'Neill's knees. The Australian couldn't corral the low snap as several Spartans swarmed him. O'Neill began to fumble the ball around until it popped into the arms of Michigan State's Jalen Watts-Jackson.

A convoy of six white jerseys led the MSU defensive back towards the end zone. The game's final play ran out the clock as No. 20 crossed the goal line for the game-winning touchdown.

Known today as the "Gift Six" and "Fail to the Victors" -- the latter is a clever play on Michigan's fight song -- the special teams blunder shocked the 111,000 fans at Michigan Stadium, lifted Michigan State to an improbably 27-23 victory, and turned Chris Baldwin's face into the most viral meme of the decade.

The Michigan State Spartans and head coach Mark Dantonio rode that wave of emotions to a 12-2 record during that 2015 campaign. They were upset by Nebraska two games later, but beat Iowa to bring a Big Ten Championship to East Lansing. The Spartans earned the No. 3-seed in the College Football Playoff, but were blanked in that football game by Alabama, 38-0.

As for Michigan, they lost one more matchup that season to Ohio State, then defeated Florida in the Citrus Bowl to finish 10-3.

O'Neill, a graduate transfer who'd ranked sixth-nationally in punting average (44.1 yards) with Montana State the year prior, received death threats on social media. He was able to find positives, though, through messages of support from fans understanding his grave mistake.

"It sticks a lot, especially being there and experiencing a lot of that postgame sadness and seeing all the players run on the field and just celebrating a long time after we were done," Hurst told The Detroit News. "It hurts and it sticks."

O'Neill was an All-Big Ten honorable mention in 2015. 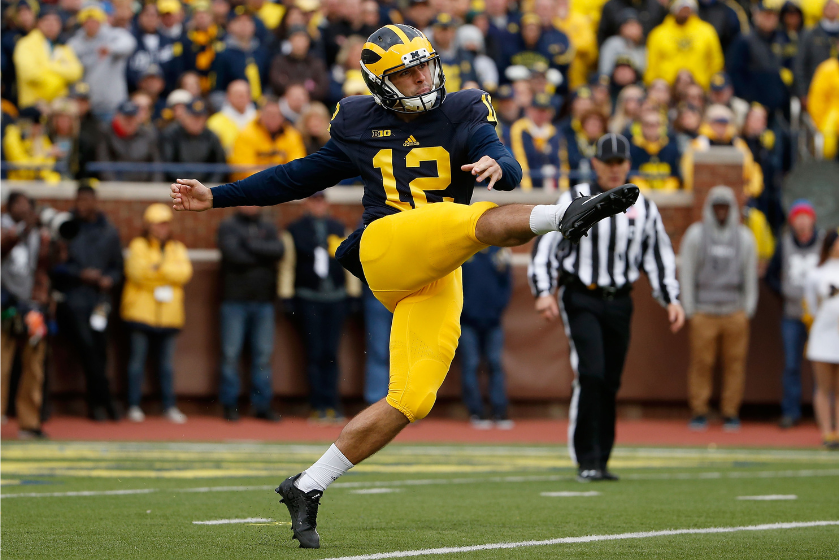 For what it's worth, the Wolverines were out-gained 386-230 on offense and managed 10 first downs the entire game. It's a miracle they were in position to win.

Blake O'Neill isn't the first player to be scapegoated for a loss, and he won't be the last.

College football's greatest endings aren't always Hail Mary touchdowns or 15-lateral kickoff returns. Sometimes, the vulnerability in all of us is shown at a critical moment people will never forget.

This article was originally published May 18, 2020.