Since his hiring at Michigan in 2015, Jim Harbaugh has been one of the most enigmatic coaches in college football.

From his NFL record to his eccentric personality, Harbaugh's name has often preceded the program he spearheads. That was until last season when Harbaugh led the Michigan Wolverines to their first Big Ten Championship since 2004 and a College Football Playoff run. Arguably more important to the maize-and-blue fan base, Harbaugh also clinched the team's first win over archrival Ohio State since 2011.

After a landmark season, Harbaugh will now look to build on the program's momentum and return the U of M to its status as a college football juggernaut. For that reason, the squad's upcoming campaign may just be the most consequential in establishing Harbaugh's legacy in Ann Arbor.

In assessing the 58-year-old's ripening upshot, it's vital to consider how Harbaugh stacks up to his Big House predecessors. 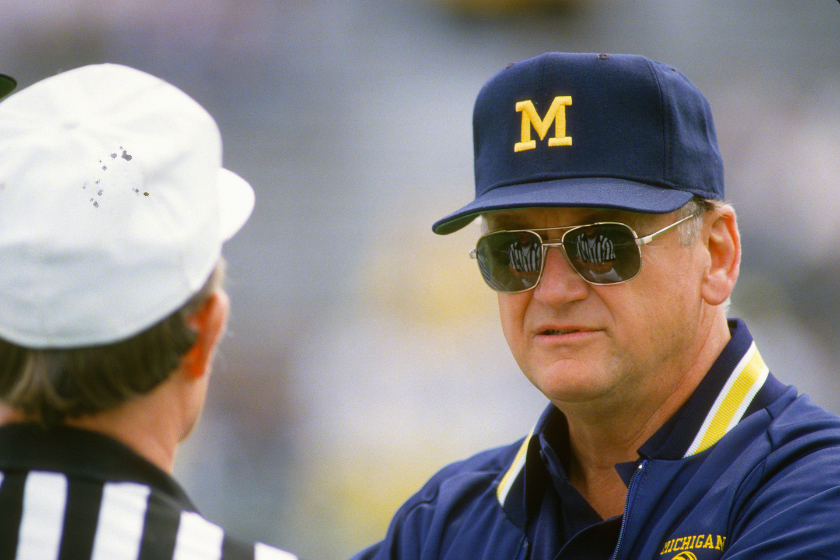 There is no coach more iconic in U of M history than Glenn "Bo" Schembechler, with a statue of the football great planted outside of the Big House. Legacy is a complicated word for Schembechler, though, whose tenure has posthumously come under scrutiny following the uncovering of sexual assault allegations against a former team doctor.

A firm hired by the university found that program officials knew of reports that Dr. Robert Anderson had sexually assaulted students. The University of Michigan announced a $490 million settlement with more than 1,000 people who say they were victims of Anderson.

While it's impossible to divorce Schembechler's legacy from the recent off-field developments, especially given the scope of the accusations and findings, his era is critical in understanding the program's trajectory.

During his tenure from 1969-1989, Schembechler amassed a staggering record of 194-48 and five draws for a .802-win percentage. Schembechler's term was punctuated with 13 conference titles, helping Michigan become the winningest college football program of all time. 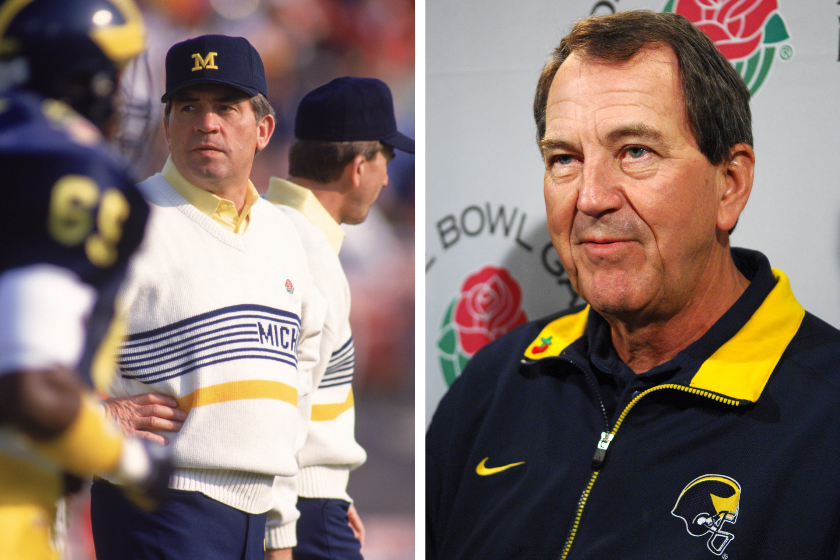 RELATED: A Tom Brady Statue at Michigan? Jim Harbaugh Wants it to Happen

Schembechler was succeeded by longtime assistant Gary Moeller, who recently passed at the age of 81 in July. Moeller upheld Michigan's prestige on the gridiron in his four years as head coach, leading the Wolverines to 44 victories behind a .771-win percentage while securing three conference titles.

"Gary Moeller was a great family man, great friend, great coach, and a man of integrity and high character," Lloyd Carr, who took over for Moeller as Michigan's head coach in 1995, said in a statement. "I admired him, I respected him and I loved him."

Perhaps only second to Schembechler, Carr is the coach most closely associated with Michigan.

After joining Moeller's coaching staff as an assistant in 1980, Carr got the head coaching nod in 1995, a position he held for over a decade. Critically, Carr helped the Wolverines their most recent national championship in 1997 while logging 112 wins and five Big 10 titles. It's hard to argue against Carr's success as a head coach, though detractors will point to his 6-7 record against the Buckeyes and his 6-7 record in bowl games as potential blemishes on his resume. Carr also often received criticism for his risk-averse coaching style, especially given the caliber of talent at his disposal.

Off the field and in the locker room, however, Carr upheld a dignified and respectable reputation, which Michigan has been eager to pride itself on, with the legendary coach perhaps the most scandal-free head of the program to date. 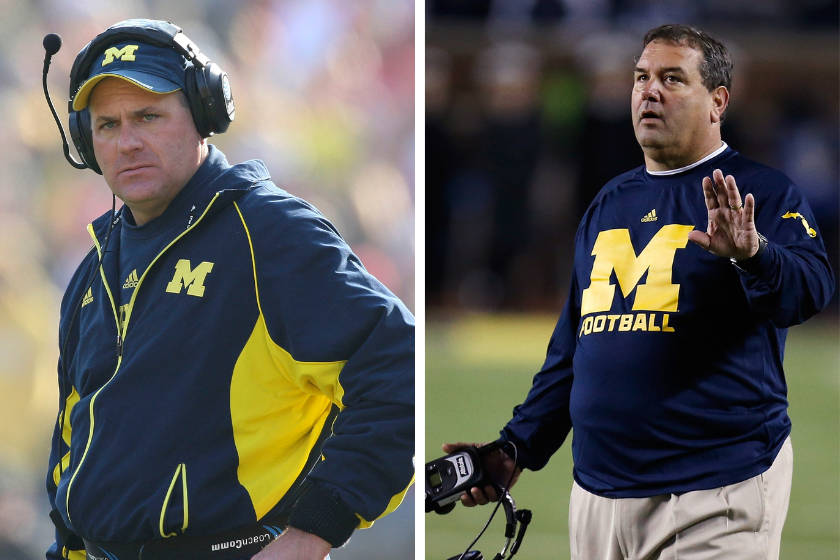 Rich Rodriguez and Brady Hoke ushered in a new era in the mid-aughts, with Rodriguez committed to a spread offense that few Michigan fans and insiders invested in. The new coach also was not a "Michigan Man," holding virtually no ties to Ann Arbor, which supporters did not appreciate. With no one buying what Rodriguez was selling, Hoke was appointed to the head coaching position in 2011, and we all know how that went.

While Hoke talked the talk of a "Michigan Man," unlike his predecessor, and shored up the program's defense, he did little to establish a cohesive offense and was ousted by 2014.

Where That Leaves Jim Harbaugh 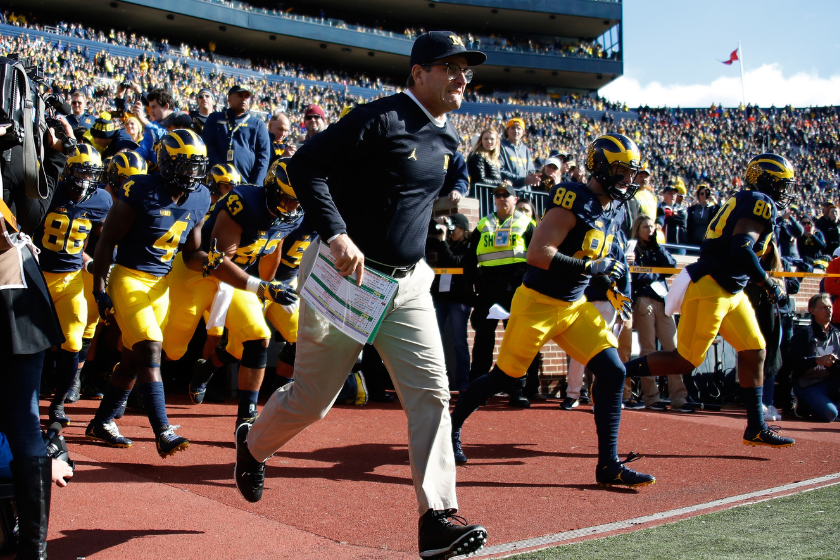 This leads us back to Harbaugh, who bleeds maize and blue while boasting an impressive resume, earning him the favor of fans and program backers alike. The former NFL coach, on name recognition alone, quickly surpassed his two predecessors, Hoke and Rodriguez, but where will he fall in the all-time Michigan greats discussion, especially up against the likes of Schembechler and Carr?

Recruiting may just be the difference-maker for Harbaugh's record. Not seen as a forceful recruiter, NIL hasn't helped Harbaugh, either. As other schools continue to pad out their booster programs, promoting a model more closely resembling pay-to-play, Harbaugh has stayed committed to Michigan's stricter approach to name, image and likeness.

"Right or wrong, our philosophy coming to the University of Michigan.. it's still going to be a transformational experience rather than a transactional experience," Harbaugh told reporters in June.

On top of recruiting woes, Harbaugh hasn't had the talent at his disposal other coaches have enjoyed, but this year may be different. As a quarterback specialist, Harbaugh will have a motivated starter as a battle between veteran Cade McNamara and former five-star recruit JJ McCarthy heats up entering fall camp.

As Harbaugh admitted himself, running back a Big Ten title run is more challenging than achieving a breakthrough championship, but back-to-back wins are what dynasties are made of. Harbaugh's performance this year won't seal his fate in Ann Arbor, considering his freshly inked contract extension, but it will be the most critical in determining his legacy at his alma mater.

MORE: We're Still Laughing at Jim Harbaugh Getting Hit By a Football