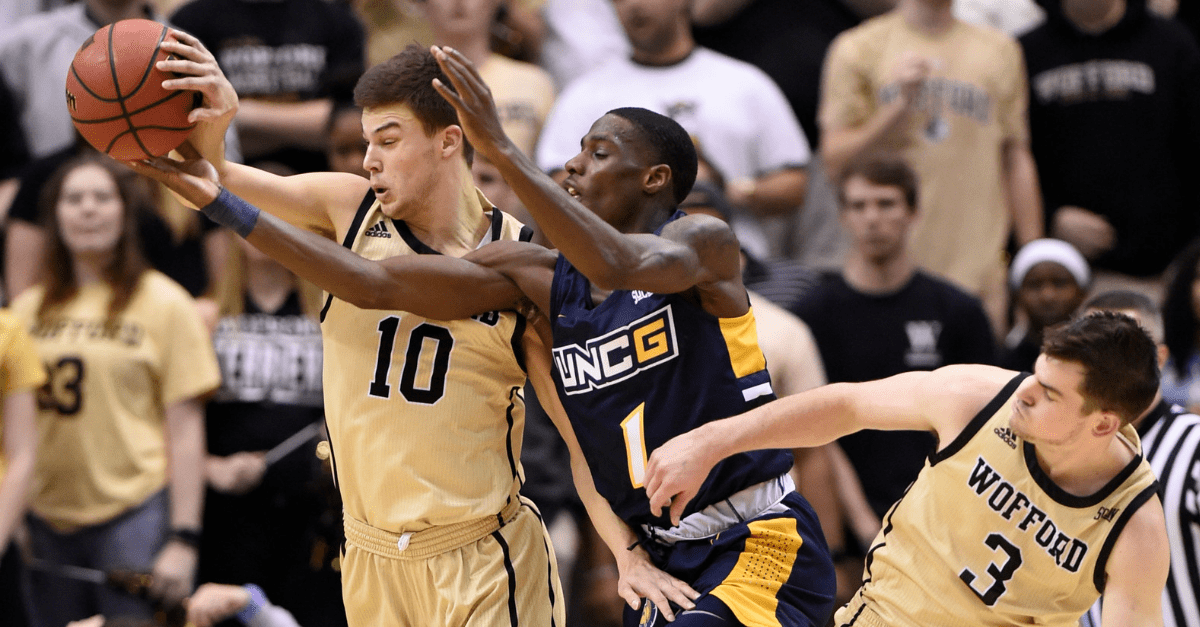 Selection Sunday is merely days away and it?s the most wonderful time of the year. Well, unless you are on the NCAA Tournament bubble, then your life is as stressful as the work project you have put off for months and the deadline is approaching. Nothing is easy in college basketball right now because that?s the way it?s supposed to be.

March Madness brings out the best and worst in everyone. It?s also an ideal time for men to get vasectomies, but whatever. The point is: The NCAA Tournament is a beautiful thing, there?s not a single team in the country that doesn?t want to be a part of it, and there are a handful of teams that don?t get a fair chance to shine on the biggest stage.

The Selection Committee needs to put more mid-major teams in the NCAA Tournament this year because it?s the right thing to do. The Southern Conference Tournament championship between the Wofford Terriers and the University of North Carolina-Greensboro Spartans on Monday night is the perfect example of that.

UNCG lost 70-58, but, man, that squad can get after it and pushed the No. 20 Terriers for almost the entire game.

.@UNCGBasketball put up a tremendous fight against the No. 20 team in the nation Monday night and showed they belong on the big stage. #letsgoG pic.twitter.com/B4xcRsbNEr

With every mid-major conference like the SoCon, the team who wins that league tournament gets an automatic bid in the NCAA Tournament. Sometimes the best team wins. Sometimes they don?t. However, seldom do these men?s basketball leagues get another team outside of that auto-bid.

Normally, that is fine. After all, that is what makes March so special. Then there are times such as right now where that is a bunch of bull.

UNCG is currently the gleaming example of the often hypocrisy and politics of basketball. The Spartans deserve to be in the Big Dance and they are nowhere to be found in any projected field, especially ESPN?s Bracketology with Joe Lunardi.

Why? Because most people don?t understand Francis Alonso and Isaiah Miller can get buckets, but they recognize big team names like NC State, Ohio State, Clemson, Indiana, TCU, Texas, Temple, Florida, and everyone else who currently sits on the bubble and is at the mercy of the Selection Committee.

This is what makes the UNC Greensboro case so baffling: The Spartans are 28-6 and their only losses have come at LSU (very respectable), at Kentucky (beyond respectable), at Furman (the same team just beat in the SoCon semifinals) and three times to Wofford (a pretty outstanding team in its own right).

Meanwhile, Indiana, a very mediocre team with a superstar named Romeo Langford, is just on the cusp of an at-large bid with a 17-14 overall record, including 8-12 in the Big Ten. Sure, the Hoosiers somehow beat Michigan State twice and took down Wisconsin, and they play a much tougher overall schedule, but Archie Miller?s team is nothing more than average. Nobody can or should defend that.

Meanwhile, UNC Greenboro ? with a NCAA Net Ranking of 58 ? is going to get snubbed because it couldn?t beat two top-10 SEC teams on the road or clearly the best team in their league.

?Just look at where this league is ranked nationally. Other leagues that have been ranked here in past years have gotten multiple bids. We have a top-20 team, and (Wofford) played like it all year. And we?ve got a couple other really dang good teams. I?ve got one here. I?m looking at our resumé: We?ve lost six games, and they?re all ?Quad 1? losses. We have have two ?Quad 1? wins. We have no losses in any other quad. We have an unbelievable resumé to get in the NCAA Tournament. If the one team that?s keeping us out is Wofford, who?s a top-20 team in the nation, that just doesn?t seem right to me. My team deserves to be in, and this league deserves multiple bids. But we?ll see. Because that is completely out of our hands.?

In most years, the one-bid league rule is pretty fair. Win your conference championship and you?re in. However, the college basketball bubble is abnormally weak this season, and some additional parity with teams that have shown up for every game this season deserve a bit of a nod more than the Power 6 teams that have been pretty moody.

If there is a time to swallow some ego and pride and test what a few more mid-major teams would do in the NCAA Tournament, now is definitely the time.

The Selection Committee must take their new Net Rankings metrics into consideration, but must also use common sense when looking at regular season resumes.

There is no reason UNC Greensboro Spartans (or even conference foe Furman, for that matter) doesn?t belong in the NCAA Tournament.

Not winning the Southern Conference championship shouldn?t be the reason to hold the Spartans back from the biggest college basketball tournament because they don?t play in the ACC.