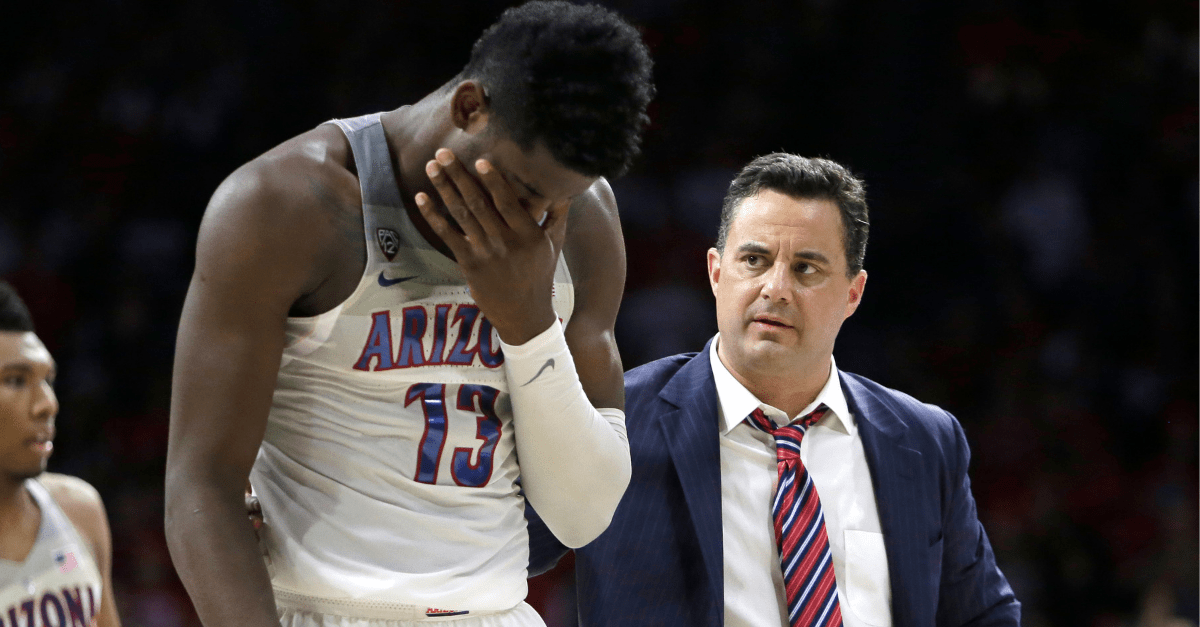 If you’ve missed the ongoing court cases taking place in a massive college basketball corruption trial, here’s the skinny: three men have already been convicted for funneling illegal payments to basketball recruits so they would attend schools sponsored by Adidas. Now, a second trial has moved into payments that two of those men, aspiring sports agent Christian Dawkins and former Adidas consultant Merl Code, allegedly made to basketball recruits and their families in exchange for signing with Dawkins’ newly-founded sports agency.

On Wednesday, federal prosecutors played a recording of a phone call between Dawkins and former Arizona assistant coach Emanuel “Book” Richardson. That call in June 2017 was intercepted by the FBI and unveiled some serious allegations involving Arizona head coach Sean Miller and the No. 1 overall pick in the 2018 NBA Draft, Deandre Ayton.

In that call, the two men discussed how to get Ayton to sign with Dawkins’ sports management company after college. That’s when Richardson said that Miller was allegedly paying Ayton $10,000 per month to attend the University of Arizona.

Here is a transcript of the call that was obtained by ESPN:

Richardson: “Sean’s got to get the [expletive] out of the way and let us work.”

Dawkins: “We’ll see how Sean plays it out.”

R: “You know what he bought per month?”

D: “He’s putting up some real money for them [expletive]. He told me he’s getting killed.”

That same phone call also involved Dawkins claiming that Rawle Alkins, a former Arizona guard currently for the Chicago Bulls, and “all them” ? referring to other UA basketball players ? were being “taken care of” by Sean Miller.

Dawkins testified on Wednesday, saying that he didn’t see anything wrong with paying college athletes behind the NCAA and universities’ backs in order to advance his personal agenda.

“They are the only kids in college who can’t get paid legally. There is a need for them to get paid,” Dawkins said in court. “I don’t think anything that’s been discussed in either case is a crime.”

Will be interesting to see if wiretaps between Sean Miller and Christian Dawkins and played today during the trial. That’s what everyone wants to hear. … actual convos between Dawkins and head coaches.

Back in February 2018, FBI wiretaps overheard a call between Dawkins and Miller in which the pair talked about a $100,000 payment to make sure Ayton, who was the top-rated center and No. 3 player in the country at the time, played for the Arizona Wildcats.

After a Consensus All-American freshman season at Arizona when he was named Pac-12 Player of the Year, Ayton was selected with the first overall pick by the Phoenix Suns. He averaged 16.3 points and 10.3 rebounds per game as a rookie.

There’s no telling how deep this rabbit hole goes. For years now, it’s been common knowledge among fans of the game that college athletes get paid. However, the NCAA does a beautiful job of sweeping allegations and rumors like this under the rug to keep their reputation as spotless as possible. With these allegations now coming to light and being backed with legitimate discussions of money changing hands, it’s only going to get worse.

Sean Miller continues to deny ever paying money to a recruit.