Every second Sunday in March, basketball teams and fans alike gather around their TVs and watch with bated breath in the hopes that their silent prayers have been answered and that their college basketball season continues for another three weeks.

Okay, spectacular might be a bit of a stretch, but for basketball fans everywhere Selection Sunday feels like the biggest Sunday of the year. Perhaps even bigger than the Super Bowl. No way, this one is bigger than the rest for college hoops fanatics.

Others might see it as just an ordinary Sunday in the middle of March. But to those of us who worship at the temple of Naismith, our eyes will be glued to the TV in anticipation to see where our beloved team will be seeded in the NCAA Tournament.

What is Selection Sunday?

Selection Sunday is the granddaddy of all Sundays in the college basketball world. The day of reckoning for millions of players and fans around the country. A day of clarity that can make or break title hopes, prolong or end careers and answer or neglect prayers. Sometimes you hear your team's name, sometimes not. But you always watch.

Since 1939, the NCAA Tournament has been the designated path to the national championship in men's college basketball. Starting as an eight-team bracket, the team to survive and win three games in a row was to be named National Champion. 83 years later, the NCAA Men's Basketball Tournament has a field of 68 teams, requiring the champion to win six games in a row over a three-week stretch. It has grown into one of the most-watched sporting events in the country year in and year out, becoming known for its gripping, high-intensity moments, and, of course, improbable upsets.

Millions of Americans fill out their brackets every year, in an effort to predict the exact outcome of every game; a statistically impossible yet thrilling task. Who will be the first four teams to successfully upset a higher seed? Which teams will falter in the second round? What bracketology pundit do you put your faith in when picking between Indiana and Texas?

Bubbles burst, Davids slay Goliaths, and dreams come true. This is the madness of March and Selection Sunday is the gateway.

How are March Madness teams selected? 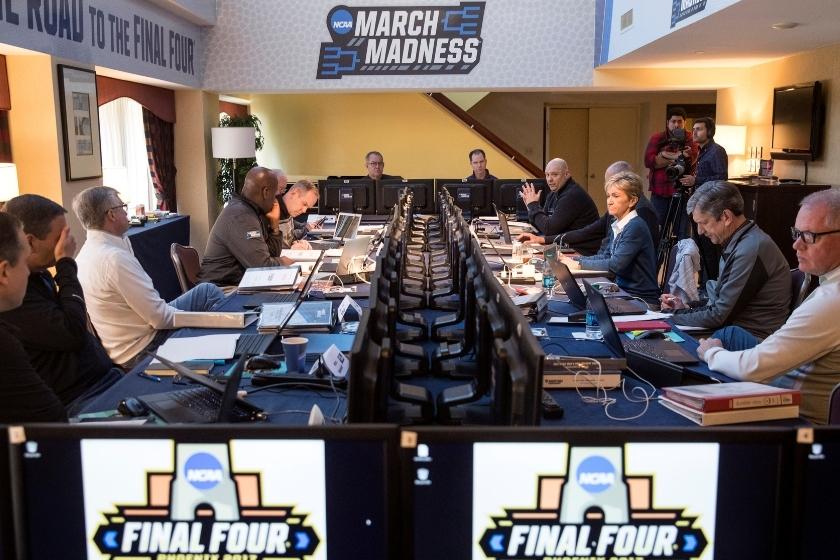 The NCAA Selection committee is made up of twelve members every year, all of them either Conference representatives or athletic directors. Five of them are from the five major NCAA conferences (ACC, Big Ten, Big 12, PAC 12, SEC), three from the three next most successful conferences that year, and the rest being chosen from the remaining 20 NCAA Division I conferences in the country.

Just under half of the 68 teams selected receive automatic bids as a result of winning their own respective conferences, and the remaining 36 teams are selected by the committee as at-large bids. The yearly bracket is revealed during CBS's exclusive NCAA Tournament Selection Show that traditionally occurs on the second Sunday in March after all of the conference tournaments have concluded.

The first CBS Selection Show aired in 1982, as a 30-minute live reveal of each team's seed in the tournament bracket, as well as their region, and opponent. Due to popularity, that show was extended to one-hour in 2001. Len DeLuca, former CBS producer described Selection Sunday as "the most natural reality TV you can have because you're watching as teams learn their fate." The show averages 4-6 million viewers a year and has become somewhat of an opening ceremony to the NCAA Tournament. The show consists of analysis and projections, interviews with teams and coaches, and early predictions once the bracket is released.

Can Baylor repeat as NCAA Tournament Champions? Will Gonzaga finally climb the mountaintop and win the Championship game? Will John Calipari and Kentucky go a full decade without a national title? Or will Duke send Coach K off into the sunset with a buzzer-beater win? Is Auburn a real contender after their SEC Tournament loss? Can the Big East return to their former glory? Is Kansas for real? All of these questions and more get discussed, like a waiter reading the specials at a restaurant. Each sentence is more delicious than the next.

When is Selection Sunday for the Women's NCAA Tournament?

The women of college basketball have their own Selection Sunday show as well, which will take place at 8:00 PM EST, on ESPN and ESPN2. We've already seen some fantastic upsets in the conference tournaments and the Women's Basketball Tournament is sure to be as exciting, if not more than their male schoolmates. With storylines like the South Carolina phenom Aliyah Boston vs. Iowa star Caitlin Clark for Player of the Year debate, Stanford going for the back-to-back National titles and UConn's Paige Bueckers hoping to bring the Huskies back to their heydays days of NCAA dominance, the Women's tournament is jam-packed with excitement.

So, get your popcorn ready because Sunday, March 13, at 6:00 PM EST, the records reset to 0-0, rankings become irrelevant and the madness begins. Anything can happen in March. From first-round exits for major contenders, Elite Eight Upsets to Cinderella story teams in the Final Four. The impossible becomes possible. And it all starts with Selection Sunday.