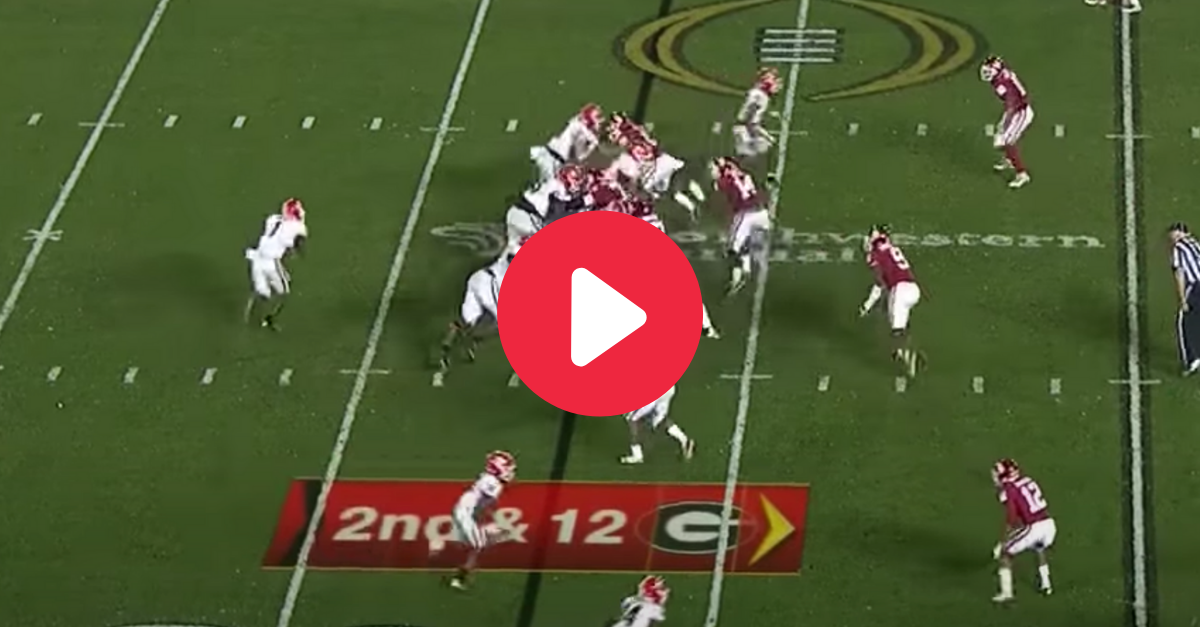 When watching the semifinal games of the College Football Playoff, they have often times ended in blowouts. But the 2018 Rose Bowl wasn’t just entertaining, it was the best semifinal game since the playoff began in 2014.

When the Georgia Bulldogs and Oklahoma Sooners met in Pasadena, California on New Year’s Day 2018 with a trip to the College Football National Championship Game on the line, expectations were lowered by the lack of competitive games up until that point. But boy, did those two teams exceed what everyone thought would happen.

But the first game on New Year’s Day was played at the Rose Bowl Stadium between the Sooners who won the Big 12 and the Bulldogs who won the SEC Championship over Auburn. The game, broadcast on ESPN, became the fifth most-watched cable program in history.

Oklahoma was making their second appearance in the College Football Playoff while Georgia was selected for the first time.

These four teams were selected with the Ohio State Buckeyes and Wisconsin Badgers from the Big Ten, USC from the Pac-12, and UCF from the AAC on the outside, looking in. And I am thankful it went down like that because it led to one of the best postseason games in college football history.

Led by a running back duo of Nick Chubb and Sony Michel, the Georgia Bulldogs were favored by 2.5 points over Heisman Trophy winner Baker Mayfield and the Oklahoma Sooners.

With the insane amount of talent in this game, it should come as no surprise that the offenses scored early and often. Though Georgia punted on their first possession, Mayfield got the Sooners going early with an 80-yard touchdown drive to take a seven-point lead.

The Bulldogs matched the score about three minutes later with a 13-yard touchdown pass from Jake Fromm to Michel. But just 91 seconds later, Rodney Anderson capped off a 75-yard drive to take back the lead for Oklahoma. And though it wasn’t until the second quarter, Anderson would run for his second touchdown of the game to push their lead to 21-7 with a 41-yard touchdown run.

Michel answered by busting a 75-yard touchdown run to find the end zone.

Even though everyone likes to give Oklahoma grief for not playing defense, the Bulldogs could not stop the Sooners, giving up 10 more points before halftime. Mayfield was on the receiving end of a two-yard touchdown pass from CeeDee Lamb with six seconds remaining in the half.

With a Rodrigo Blankenship 55-yard field goal as time expired, Oklahoma led 31-17 at the half, but things were far from over.

During the third quarter, Georgia shut out the Sooners and scored two more touchdowns on the ground. The first was a 50-yard run by Chubb, and the other was Michel scampering for 38 yards. With the score tied at 31 to start the fourth quarter, it was the Bulldogs who would continue their scoring, capping off a 24-0 run with Javon Wims catching a four-yard touchdown from Fromm.

Even though they gave up 24 unanswered points, Oklahoma’s early lead kept Lincoln Riley’s team in the game. With just under nine minutes left in the fourth quarter, Mayfield connected with Dimitri Flowers for an 11-yard touchdown pass to tie the game at 38.

Less than two minutes later, Steven Parker picked up a Michel fumble and ran 46 yards for a touchdown to give his team the lead, 45-38.

With three minutes and 22 seconds remaining in the fourth quarter, Georgia got the ball back trailing by seven points beginning at their own 41-yard line. Fromm led the Bulldogs on a seven-play, 59 yard drive that was capped off with a two-yard touchdown run by Chubb.

With 55 seconds remaining, Mayfield couldn’t get the Sooners down the field, leading to a punt, which Georgia knelt down to run out the clock.

We headed to the first overtime in College Football Playoff history.

The Bulldogs were on offense first and handed the ball to each of their running backs once before Fromm threw an incompletion on third down. Blankenship hit a 38-yard field goal to take the lead.

Oklahoma didn’t have much more success on their first drive of overtime, mustering a total of nine yards. Austin Seibert hit a 33-yard field goal to push the game into a second overtime.

The Sooners found success moving the ball on their second drive, settling for a field goal attempt on fourth down from the 10-yard line. But UGA’s Lorenzo Carter got enough of the ball on the kick attempt to force a miss and give the Bulldogs an opportunity to win with any points on their own possession in double overtime.

The drive didn’t start well with D’Andre Swift being stopped for a two-yard loss on first down. But like he did all game, Sony Michel broke a run for 27 yards and a touchdown to win the game and send Georgia to the National Championship.

It was no surprise that Michel was named the game’s MVP, finishing with 181 yards and three touchdowns on 11 carries and 41 yards and a touchdown on four catches. Roquan Smith was the defensive MVP with 11 total tackles. Chubb also had an outstanding performance with 145 yards and two touchdowns on 14 attempts.

The Crimson Tide would then go on to beat Clemson, 24-6 in the game following the Rose Bowl for a match-up between SEC rivals in the Granddaddy of them all. Meeting in Atlanta at Mercedes-Benz Stadium, Alabama would win the game, 26-23 thanks to late-game heroics from Tua Tagovailoa to lead them back from a 20-7 deficit and end the game on a 19-3 run and a win in overtime.