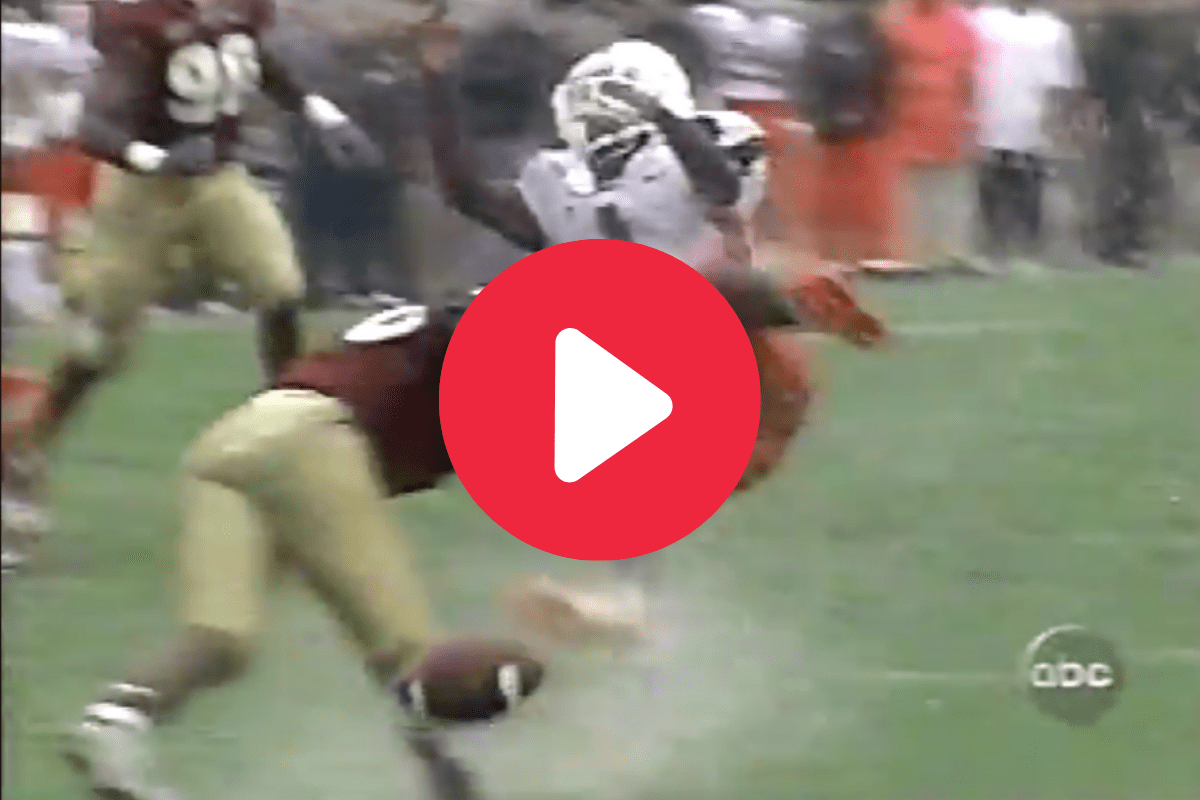 The Florida State Seminoles and Miami Hurricanes hate each other. That’s just a matter of fact. The two in-state colleges began playing each other in 1951 and have met every year since 1969, usually playing in a ranked match that has national championship implications.

FSU fans have experienced more heartbreak than any one fan base deserves in a rivalry with the amount of “Wide Right” losses to the ‘Canes. But Florida State has had their share of success, such as handing the 1989 Miami national championship team its lone loss and hanging on in 2005 after Miami missed an easy field goal.

The rivalry was still at its peak in 2003 when the No. 2 Hurricanes took on the No. 5 Seminoles in Tallahassee on October 11. With future NFL stars like Sean Taylor, Vince Wilfork, Frank Gore, Devin Hester, Kellen Winslow, Jonathan Vilma on Miami and Lorenzo Booker, Leon Washington, Darnell Dockett, Antonio Cromartie on FSU, this showdown became a classic.

But the most memorable moment in 2003 Florida State-Miami wasn’t Sean Taylor’s pick-six interception, it was the vicious hit that ‘Noles cornerback Stanford Samuels laid on ‘Canes wide receiver Roscoe Parrish on a crossing route.

That is one of the hardest hits you’ll ever see. Plus, the visual of it taking place in an absolutely rain-soaked Doak Campbell Stadium makes it 10 times better.

Samuels not only sent Parrish flying off his feet in the second quarter, the defensive back knocked him out of the game and made him bleed internally. Really, he did. ESPN reported that Parrish was taken to Tallahassee Memorial Hospital and placed in the ICU. Miami head coach Larry Coker said Parrish initially had blood in his urine, a sign of internal bleeding.

The hit didn’t do much to stop Miami from winning the game, 22-14, but it is by far one of the best moments in these two college football teams’ history. Florida State and Miami would meet again in an ACC showdown in the Orange Bowl that year, and the Hurricanes also won that.

Samuels’ son, Stanford Samuels III, went on to play for Florida State University, too. He said he was in the stands for the big hit but had somehow fallen asleep for it. How does one fall asleep for something like this? Just look at its glory in slow motion.

This is still the hardest I've ever seen someone hit on live TV… pic.twitter.com/HwzQjKPfc1

“I was actually at the game when it happened, but I was sleeping in the stands, somehow through all the rain. I was probably 10 the first time I went on YouTube and saw it with a couple of my friends. I’ve seen it ever since, it’s stuck in my head now,” he told 247Sports.

Parrish somehow eventually played following the hit. He was drafted by the Buffalo Bills and played in the NFL, where he likely was never hit quite like he was on October 11, 2003.