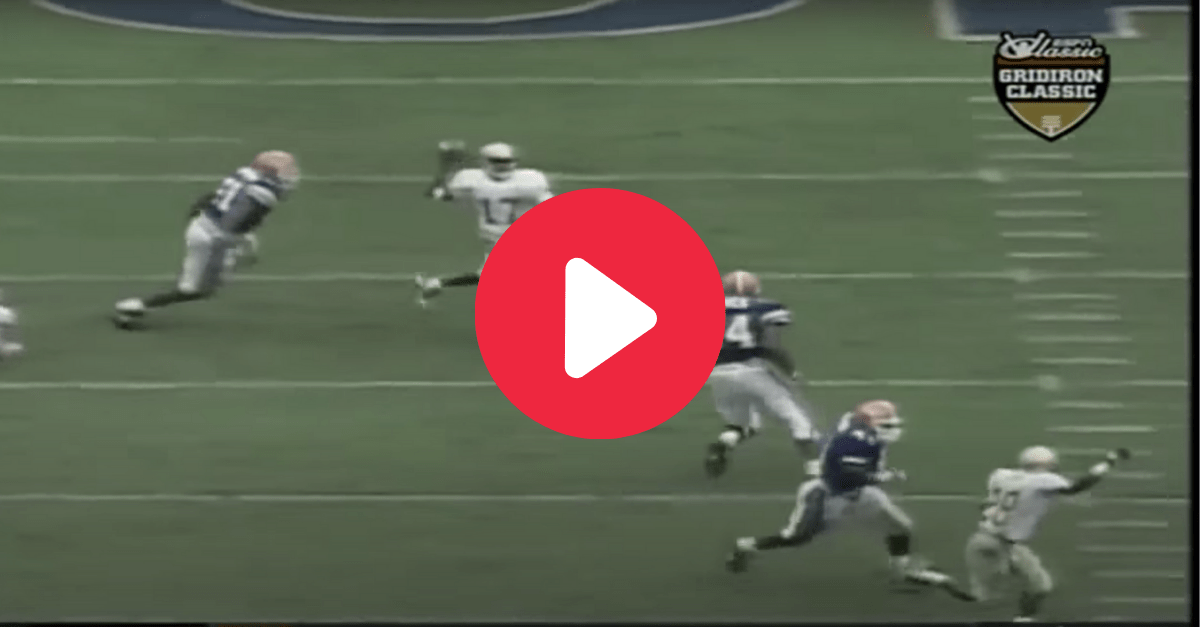 Charlie Ward is remembered in Florida State Seminoles lore for so many reasons. He became FSU’s first Heisman Trophy winner in 1993 and led Bobby Bowden‘s squad to the school’s very first national championship that same season.

Despite throwing for nearly 6,000 yards and 49 touchdowns in Tallahassee, the former college football star went on to play 12 seasons and score almost 4,000 points in the NBA with the New York Knicks, San Antonio Spurs and Houston Rockets. Ward possessed the freakish athleticism that not many athletes had during his time.

Ward’s 1993 Heisman campaign boiled down to one play in one game in particular. Every winner of the NCAA’s most prestigious honor has a “Heisman moment,” and it didn’t take a rocket scientist to figure which play was Ward’s.

Even the announcers knew immediately.

Football fans in the state of Florida probably remember every UF-FSU matchup in the 1990s. They were can’t-miss, grab-a-seat-on-the-couch-or-in-the-stands matchups. Whatever you do, pay attention.

When ACC powerhouse No. 1 FSU took a bus to Gainesville to take on the No. 7 Florida Gators in 1993, things were no different. Ben Hill Griffin Stadium was rocking that day. The Swamp was as loud as it’s ever been.

Florida State’s loss to Notre Dame just two weeks prior meant this was a win-or-no-title-shot type of game. Florida entered with one loss (to Auburn) as well. UF was riding a 24-game home win streak. It’s last home loss prior to November 27, 1993? Florida State in 1989.

FSU fans likely remember this one as a close call. The ‘Noles led 27-7 after the third quarter. Smooth sailing quickly turned into rough seas when UF’s Terry Dean scored a touchdown to cut the deficit to 13.

Following a William Floyd fumble near the goal line and an ensuing Gator drive capped by Jack Jackson‘s bobbling touchdown catch, FSU looked to be in deep doo-doo. Something was brewing in Gainesville, and it needed to be stopped.

On 3rd-and-10 at his own 21-yard line, Ward rolled out of the pocket and flicked a pass to running back Warrick Dunn. Dunn received a block down the sideline and outran everyone for a 79-yard touchdown pass. Steve Spurrier and the Gators couldn’t believe it. The play, appropriately named “Ward to Dunn,” has stood the test of time in FSU football history.

𝑨𝑪𝑪 𝑳𝒆𝒈𝒆𝒏𝒅𝒔 | 1993 🏈 vs Florida@RealCharlieWard "when you need a play, you need guys to step up and make a play" 🔥 pic.twitter.com/cxB6N5718N

“That third down conversion was pivotal. It was something that we needed because it would have given them more momentum if we would have had to punt the football,” Ward said in a tweet from the FSU Seminoles account.

“When you need a play, you need guys to step up and make a play, and we were fortunate to be able to do that.?

Yes you were, Charlie.

The Seminoles went on to win that unforgettable rivalry game, 33-21. Bobby Bowden’s then team took care of Nebraska in the Orange Bowl national championship game to take home a national title for the first time in Florida State football history.

Charlie Ward may not have gone on to play in the NFL, but it’s impossible to mention his name and not think of this iconic play.

MORE: The NFL Failed Charlie Ward, And The League Missed a Legend