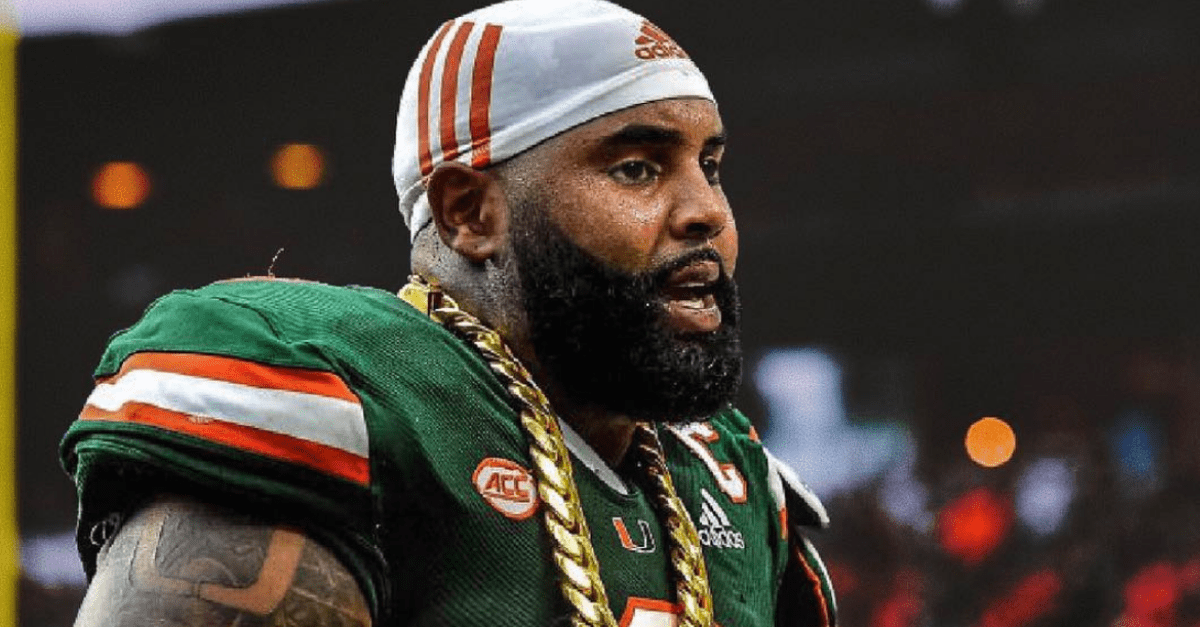 Even though the 2018 season was a huge disappointment, the Miami Hurricanes did have some players with notable years. The defense certainly led the way, but there were also some offensive players who made plays and helped the team.

Of the players on the 7-6 Hurricanes, who had the best season? This isn’t a list of the 12-best players on the team. That would be tough to do considering both sides of the ball were extremely inconsistent all season. This is the top-12 best seasons, whether it was expected or not.

RELATED: The 5 Reasons Why Manny Diaz Was the Smart Choice for Miami

With the retirement of Mark Richt, Miami will now be moving in a different direction under Manny Diaz in 2019. But in 2018, it was the Diaz-led defense that was most impressive.

In reality, the 20th defensive player on the team probably outplayed the 10th offensive player, but there were a few offensive players who stood out throughout the season and deserved recognition for playing well when others didn’t.

Obviously Gray isn’t the 12th-best player on the season, but the guy deserves all the credit in the world. Early in his career as a Cane, he struggled to see the field and seemed to always be in Al Golden’s doghouse. But he kept with it. He didn’t give up and transfer. And years later, after injuries and coaching switches, he was a great teammate and made a switch to fullback when the team needed him.

Gray wasn’t used often this season, but he was successful when used in short yardage situations. On 24 carries, he picked up 83 yards and two touchdowns. That 3.5 yards per carry may not seem impressive, but just about all of those came in short-yardage carries from the fullback position, needing only a yard or two. He also caught four passes for 37 yards.

A program is built on guys like Trayone Gray. He may have left with just 60 carries for 294 yards, but he did much more than his stats will ever show.

A surprising star of the season was Romeo Finley since there was not much playing time for a player on a team with two really good, experienced safeties and three great, experienced linebackers, and he was something in-between. In the new striker position, he found the perfect fit to get on the field in passing situations.

It was easy to see why Brevin Jordan was so sought after as a high school prospect. When the ball was thrown his way, he was a force. In nine games as a true freshman, Jordan was second on the team in receptions (32) and touchdown catches (4) and third in receiving yards (287).

By far his biggest moment was his 41-yard touchdown catch against Florida State that gave the Hurricanes a 28-27 lead with less than 12 minutes remaining after trailing 27-7.

In a new offense, Jordan could be dominant at the tight end position like so many have been for Miami in the past. If his freshman season was any indication of things to come, he will be a force moving forward.

The senior safety made so many big plays for the Hurricanes, and no, I’m not talking about Jaquan Johnson. Redwine was vital to the success of the defense this season. He was fourth on the team in tackles with 64, tied for a team-high with three interceptions, sixth with three sacks, and also forced a fumble and recovered another.

Redwine may have had the biggest play in the comeback against Florida State. With 6 minutes, 42 seconds remaining, Redwine sacked FSU quarterback Deondre Francois, forcing a fumble that led to a touchdown and beginning the great comeback.

He had such a good senior season and was invited to play in the Senior Bowl along with Johnson and Gerald Willis.

Although he saw the number of carries he received decline later in the season, Dallas was a huge part of the offense throughout much of the 2018 campaign and also was important in the return game once Jeff Thomas left the team.

He was tied for the lead with 100-yard rushing games and touchdowns and was second on the team in rushing yards on the season. He finished with 617 yards and six touchdowns on 109 carries as well as 10 catches for 85 yards. He had 11 punt returns for 191 yards and one touchdown, which came against Pittsburgh for 65 yards.

After having three fumbles in the second half of the Duke game and first quarter of the Georgia Tech game, Dallas only had 20 carries, but was the leader in the return game.

Maybe the most under-appreciated player in the country is Michael Pinckney. He could be the best linebacker, maybe best defensive player, on most teams in the country, but is instead the second linebacker in a great linebacker unit. In my opinion, when I think about the current embodiment of SWAG at the U, I think of Pinckney.

Pinckney finished third on the team in tackles with 74 total tackles, fifth on the team with 11 tackles for loss and 3.5 sacks, and had an interception in the FSU game that led to a touchdown.

The three-year starting linebacker announced last week that he would be returning for his senior season after Zach McCloud had announced before the bowl game and Manny Diaz being hired as the head coach.

Probably the most consistent player on offense was Homer. He received second-team All-ACC Honors for his 985 yards and four touchdowns on the season. Homer put up almost identical stats compared to his sophomore season, when he finished only 34 yards away from 1,000.

His best game of the season, and also his career, came against Pittsburgh when he rushed for 168 yards and a touchdown on just eight carries. He announced last week that he would forgo his senior season and enter the 2019 NFL Draft.

With how dominant other players were on the defense, it was kind of easy to forget how good Joe Jackson has been the past few seasons. He led the team in sacks and was sixth in the ACC with nine. He was also third on the team and eighth in the conference with 14.5 tackles for loss. He was also tied for the team-high with two forced fumbles and had a 42-yard pick six against UNC.

He was the second Cane to decide on turning pro after their junior seasons, joining Homer.

Maybe one of the most frustrating things as a fan this past season was the Jeff Thomas situation. And it isn’t his fault at all. Thomas was an absolutely dominant player, or at least he should have been if the quarterback situation wasn’t so awful. He was impossible to cover, There was just no one who could consistently get him the ball.

In 11 games, Thomas led the team in receiving with 35 catches for 563 yards and three touchdowns. He was also a threat in the return game with nine returns for 221 yards and a touchdown.

Toward the end of the season, Thomas left the team and eventually decided to join Illinois.

The top three can really go in any order. I put Shaq here only because he didn’t lead the team in any statistical category. However, he was great in every way on defense and great enough to be the team’s only All-ACC First-Team selection.

He was second on the team in tackles (82), and third in sacks (5) and tackles for loss (14). He also announced recently that he would be joining Pinckney and McCloud to return for their senior season and be the three starting linebackers for the fourth-consecutive season in 2019.

One of the most dominant defensive players in the country, Willis was first in the ACC with 18 tackles for loss and had 59 tackles and four sacks on the season. After taking last season off, it was tough to imagine what he could do as the top interior lineman and if he could replace RJ McIntosh and Kendrick Norton. But he was even more dominant than anyone could have imagined and showed why he was a five-star recruit coming out of high school.

He more than likely would have been a first-team all-conference if he were in any other conference, but the ACC was a tough one to crack with Clemson having a loaded defensive line and any team from the Carolina’s getting the benefit of the doubt on awards.