Iowa Rallies to Take Down Mississippi State in the Outback Bowl 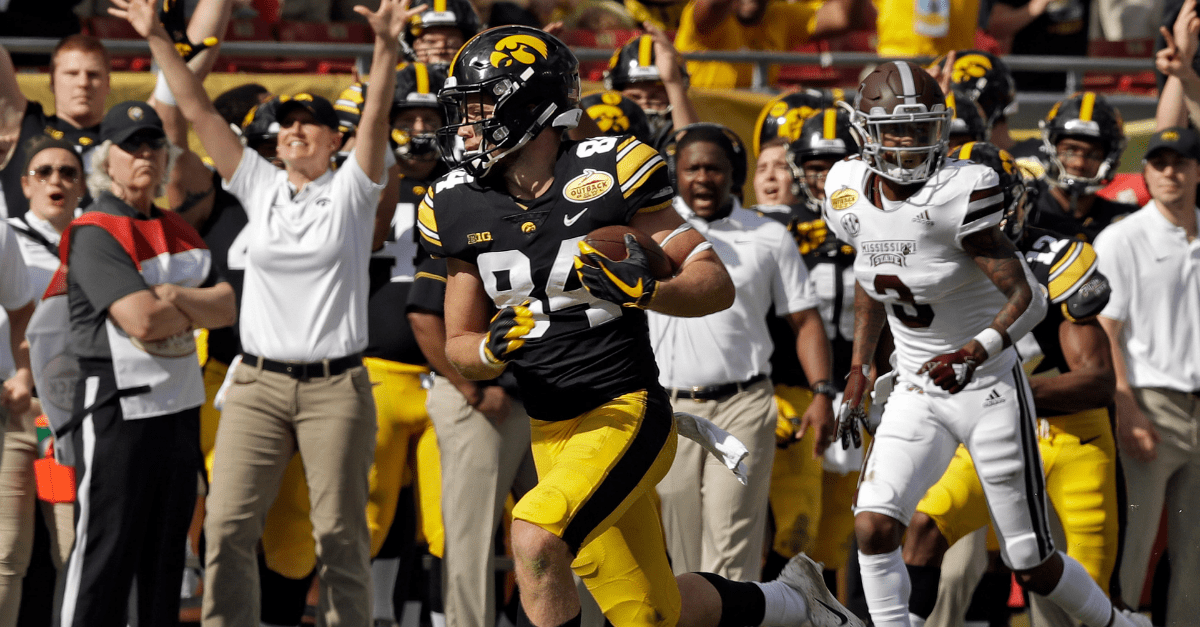 TAMPA, Fla. (AP) ? The Iowa Hawkeyes lost a yard on the last play of the Outback Bowl, pushing their final rushing total to minus 15 yards, and didn’t mind a bit.

They ran the play from victory formation.

Safety Jake Gervase’s interception in the end zone helped preserve a late lead, and a ball-hawking defense compensated for a sputtering offense as Iowa beat No. 18 Mississippi State 27-22 on Tuesday.

RELATED: This 275-Pound Touchdown is Exactly What College Football Needed

Gervase also batted down an errant fourth-down pass to end the Bulldogs’ final drive at the Iowa 32 with 25 seconds left. Two earlier Mississippi State threats in the fourth quarter led to only three points.

The Hawkeyes totaled just 199 yards, with 75 coming on a touchdown pass from Nathan Stanley to Nick Easley , but they converted three takeaways into 17 points.

The Hawkeyes won despite losing 27 inches per rush. Their three running backs totaled 4 yards in 15 carries.

“We had a hard time blocking their front,” coach Kirk Ferentz said. “Defense really bailed us out.”

Iowa (9-4) earned its biggest postseason victory since an Orange Bowl win over Georgia Tech to cap the 2009 season. Mississippi State (8-5) lost to a team outside the top 15 for the first time.

Trailing 24-19, the Bulldogs had a first down at the Iowa 1 early in the fourth quarter, but three quarterback draws lost 2 yards and they settled for a field goal.

They were again on the verge of taking the lead with nine minutes left, but receiver Stephen Guidry bobbled a tipped pass in the end zone, and Gervase snatched it away.

“Sometimes you get lucky,” Gervase said.

The Hawkeyes then drove 50 yards for a field goal, the game’s final score.

“Bowl games are a lot like early season games, where turnovers and penalties really factor in,” Ferentz said. “If you aren’t on top of that part of your game because you haven’t played in a while, it can be a really tough thing. Obviously it helped us today being a little bit more opportunistic.”

Iowa had no penalties, while Mississippi State was penalized 90 yards, including a holding call that negated a 51-yard completion.

“Too many missed opportunities, too many penalties,” Bulldogs coach Joe Moorhead said. “Can’t turn the ball, can’t give up explosive plays, can’t have penalties take scores off the board. We didn’t do enough to earn the right to win.”

“We definitely beat ourselves,” he said. “They weren’t better than us.”

A takeaway helped Iowa score two touchdowns in 97 seconds for a 17-6 lead ? especially impressive against a team that allowed only 12 TDs during the regular season.

Mississippi State rallied with two touchdowns in 18 seconds to go up 19-17. Quarterback Nick Fitzgerald gave the Bulldogs the advantage on a nifty 33-yard touchdown run , his 100th career score rushing or passing.

But on their next possession, Fitzgerald’s tipped pass was intercepted by defensive lineman Chauncey Golston. Stanley then scrambled to convert a fourth and 1, and on the next play he hit Easley with an 8-yard score to put Iowa ahead to stay, 24-19.

It's got to feel good to end your career with two TDs and a bowl win.@HawkeyeFootball WR Nick Easley would know. pic.twitter.com/8wTO3giuB8

Easley had a career-high 104 yards receiving on eight catches and was chosen the most valuable player. He nearly ran out from under his helmet on his long touchdown.

“I had a little bit of a malfunction with my helmet strap ? a little piece broke the play before,” he said. “As I was running, it started coming off a little bit. Thankfully I was able to pull it back on and continue to run.”

Easley and Gervase played their final game as seniors who walked on.

Running back Kylin Hill left the game when he took a hit to the helmet in the fourth quarter, but he was back in the lineup on the Bulldogs’ final possession.

“I’m good,” Hill tweeted with a thumbs-up emoji after the game.

Iowa will likely finish in the Top 25 for only the second time in the past nine seasons. Ferentz concluded his 20th season at Iowa and improved to 152-101, including 8-8 in bowl games.

The down-to-the-wire finish was a rarity for the Bulldogs, who had only one other game decided by fewer than 14 points.

Stanley will be a third-year starter returning to lead the 2019 Hawkeyes, who also will have their top three rushers back. They open the season Aug. 31 at home against Miami (Ohio).

With fifth-year senior Fitzgerald departing, the Bulldogs will have a new starting quarterback when they open the 2019 season on Aug. 31 in New Orleans against Louisiana.