AP Top 25: LSU Climbs to No. 4 After Statement Win vs. Texas 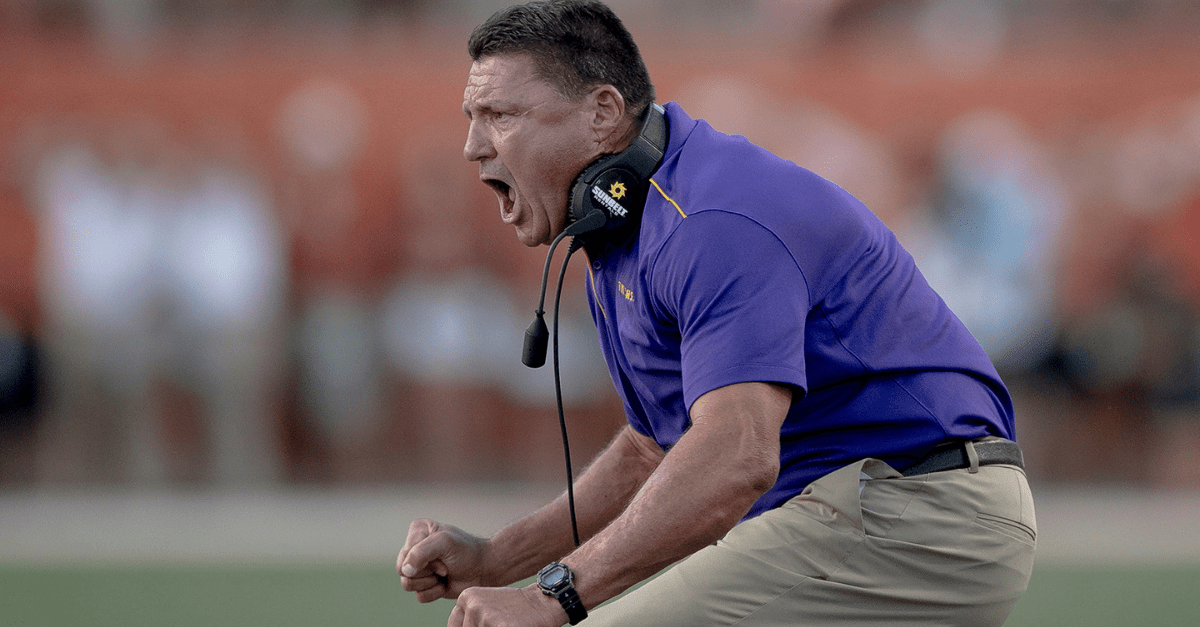 The Southeastern Conference held three of the top four spots in The Associated Press college football poll after LSU’s road victory against Texas pushed the Tigers to No. 4.

Clemson remained No. 1 on Sunday, receiving 56 first-place votes out of 62 in the Top 25 presented by Regions Bank. No. 2 Alabama received 6 first-place votes and Georgia stayed at No. 3. LSU jumped two spots after winning 45-38 at Texas on Saturday to make it three straight SEC teams after Clemson. The last conference to hold three of the top four spots in the poll was the SEC on Nov. 2, 2014, when Mississippi State was No. 1, Auburn was third and Alabama fourth.

Southern California, which was unranked in the preseason for the first time since 2001, moved in at No. 24 after beating Stanford 45-20.

Hello, America…
This is #LSU pic.twitter.com/bpMnmjBmJD

The SEC has half the top-10 teams in the country after two weeks of the regular season, with Auburn moving up to No. 8 and Florida rising to No. 9. The Tigers and Gators were two of several teams to get a bump in the rankings thanks to Michigan. The Wolverines dodged an upset, beating Army 24-21 in double overtime, but dropped three spots to No. 10.

? No. 21 Maryland is ranked for the first time since joining the Big Ten after a surprisingly easy 63-20 victory over Syracuse. The Terrapins have scored 142 points in two games under new coach Mike Locksley. The last time Maryland was ranked was 2013, when the Terps were still in the ACC, and they spent a week in early October at No. 25.

? Syracuse dropped out of the ranking after being handed the most lopsided loss (43 points) by a ranked team to an unranked team in 20 years. In October 1999, unranked Oklahoma beat No. 13 Texas A&M 51-6.

? Stanford fell out after USC scored the final 35 points of their game Saturday night.

? Nebraska is out after letting a 17-0 lead slip away at Colorado and losing in overtime.

? Iowa State, which barely held on to its ranking after needing OT to beat Northern Iowa in Week 1, dropped out in an idle week.