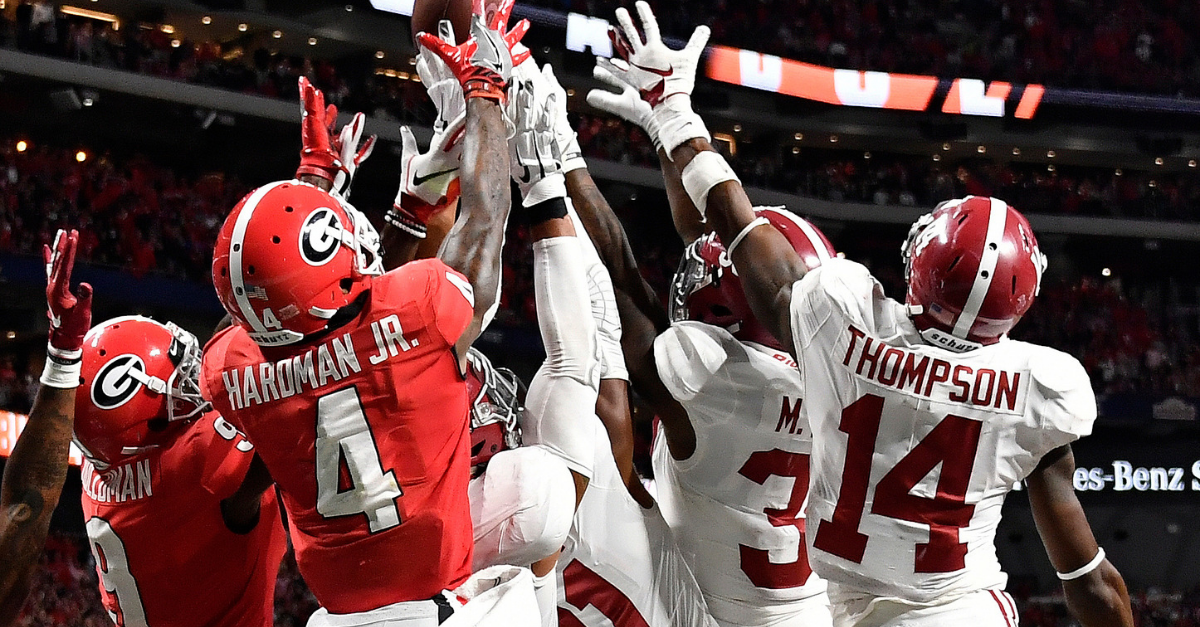 The Southeastern Conference is home to college football’s premier teams in the NCAA. The SEC has the most talented rosters, biggest stadiums, and best traditions across the country. There’s almost no metric that the conference doesn’t compete at or near the top nationally, so now SEC football teams just have to compete with each other.

And yes, that even includes starting a debate on which SEC team owns the best football uniforms. FanJuicer.com, which conducts research and polls thousands of sports fans around the world, ranked the home uniforms from all 14 SEC teams, and the results are sure to fire up a ton of arguments.

The Razorbacks have been the bottom feeders of the SEC for a long time. With only four appearances in the SEC Championship Game since 1995, resulting in zero conference titles, Arkansas doesn’t have much to look forward to when the college football season rolls around.

To make matters worse, fans also think the football team’s cardinal and white home threads are the worst in the conference, too.

Personally, I’m very against Mississippi State ranking this low. The maroon and white uniforms are clean, and the school logo on the front of the jersey is easily the conference’s coolest design. Classic triple pinstripes on their Adidas uniforms didn’t do them any favors in the poll, though.

SC might have one of the best entrances in college football, but the team’s garnet and black jerseys leave a lot to be desired. These uniforms contain 11 total stripes, representing the number of buildings at The Horseshoe on campus. I’m sure that fact didn’t factor into the votes, though.

Again, I’m stumped why Tennessee is sitting this low. The iconic orange and white Nike jerseys are some of the best in the country, not just in the SEC, but the voters outside of Knoxville didn’t see it that way, I guess.

One of my favorite color combinations is Mizzou’s old gold and black. Their Nike jerseys always get reimagined with special uniform combinations during the season, but it’s possible the team’s limited success ? Mizzou is barely above .500 in SEC games ? didn’t earn them any favors in this poll.

If anyone wants to explain how Vanderbilt’s black uniforms (similar colors, less detail, worse logo) ranked higher than Missouri’s, please let me know on Twitter. This one is a stumper.

The Texas A&M Aggies rank around the middle of the pack despite having VERY similar home threads to Mississippi State. The only reason I can think that they made it this high is because of the iconic Texas A&M logo on the side of their helmets. Plus, those top-of-the-shoulder stripes are too clean to ignore.

Some people think Kentucky’s blue and white jerseys with those checkered sleeves are easily the SEC’s strangest, yet they grabbed almost eight percent of the first-place votes in this poll. How? Your guess is as good as mine…

Ole Miss is one of the only teams in the SEC with three different helmet colors. The traditional navy blue and cardinal red colors are the team’s go-to on home game days, but it’s the powder blue helmets on red jerseys that stand out the most. If we’re ranking alternates, they’re contending for a top-2 spot without a question.

The classic, clean, traditional look apparently isn’t that exciting. The crimson and white are some of college football’s most iconic threads, but they didn’t earn enough votes to jump the teams they beat on the field year after year.

To be honest, I don’t think Crimson Tide give a damn about a list of “best uniforms” when they have 17 national championships in their back pocket…

If we’re talking alternate uniforms, nothing would top UGA’s all-black threads that only make random appearances over time. The Bulldogs’ red and black colors on top of grey pants are as sharp as any in the conference, but the Dawgs were barely edged out by their rival in the SEC East.

The Gators’ orange helmets likely earned them the nod here, but it’s the combination of orange and blue stripes make their white pants really pop, plus the blue tops are as sharp as any in the SEC. Not only that, but UF’s all-orange alternates create some added flair when called upon down in The Swamp.

The only team in the SEC to wear white jerseys at home is down in Baton Rouge, and they do it in grand style. The purple and gold colors gives LSU that Louisiana feel that fans love to sport year-round, and their iconic yellow helmets are impossible to hate.

Still, there’s one team that surprisingly ran away with first place.

Look away Alabama fans, you’re not going to agree with this one. Auburn grabbed 11 percent of the first-place votes in a runaway. Their navy blue and burnt orange color scheme make a perfect combination for their Under Armour threads, but it’s the pairing of white helmets and pants with the blue jerseys that set them apart.

The Tigers may have underachieved by their standards in recent seasons, but there’s no doubting who the kings of SEC home uniforms really is.

This article was originally published September 6, 2019.

MORE: How Much Does Miami’s Turnover Chain Really Cost?