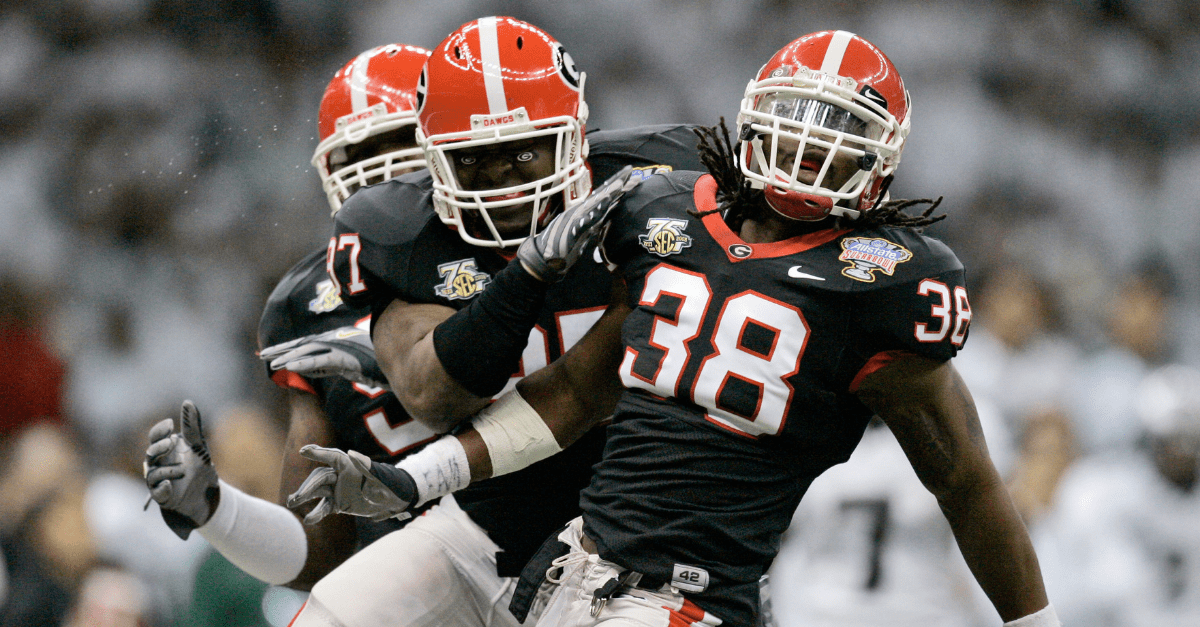 When it comes to college football, there’s no shortage of wild jersey combinations in the Pac-12, one-of-a-kind helmets in the Big Ten, and quite a few strange choices in the SEC. There are plenty of awesome alternate jerseys to choose from, but one school only wears their “Saturday Best” on the rarest occasions.

They say if you look good, you play good. And when you’ve finished in the AP Top 10 each of the last three seasons, you deserve to do just that. It’s time for the University of Georgia to bring out their iconic black jerseys when the 2020 college football season begins.

The Georgia Bulldogs Black Out Jerseys aren’t a regular staple of Georgia’s uniform arsenal, but it’s a huge event when the Bulldogs emerge from the tunnel at Sanford Stadium wearing those black alternate uniforms with red trim and silver britches. Since their debut in 2007 ? when the Matthew Stafford-led Bulldogs rolled Auburn 45-20 in a matchup of AP Top 25 teams ? the jerseys have only made a handful of appearances.

Before the 2018 season, Georgia football’s equipment managers even teased a potential return of the alternates by showing off all of the Georgia Bulldogs jerseys in a tweet back in May.

Latest upgrade to the equipment room this off-season — new jersey storage has been installed! pic.twitter.com/0HYdfEFCjp

RELATED: When “Baba O’Riley” and Georgia Mix, You Get This Incredible Hype Video

Despite home games against Tennessee, Auburn and Georgia Tech, as well as the SEC Championship game against the Alabama Crimson Tide, it seemed like the perfect opportunity for the Bulldogs to go back in black and bring out these big game football jerseys in 2018.

Fans even began a social media movement using the hashtags #BlackoutAuburn and #BlackoutSanford to bring them back when Georgia hosted the Auburn Tigers.

Even though the Bulldogs usually keep these Nike football jerseys on the shelf, despite not wearing them since 2016, you’re probably going to need to buy your own Jake Fromm Black Out Replica Jersey this season and beyond.

During the 2019 offseason, quarterback Jake Fromm revealed to CBS announcer Brad Nessler that he wanted to wear the black jerseys before leaving Athens. Curiously enough, UGA hosted the Notre Dame Fighting Irish for a massive night game on September 21, 2019.

There were tons of Dawgs wearing Georgia Bulldogs Women’s Black, Long Sleeve T-Shirts, plus these All-Black Georgia Bulldogs Nike Pullover Hoodies were flying off the shelves of the UGA fan shop.

What better time than to bust out the red and black alternates for a game that ESPN’s College GameDay would be at?

But once again, the Georgia’s black jerseys were a no-show.

The iconic UGA team logo and football gear has been worn by great players that went to the NFL, but some, like running back Todd Gurley II ? who played at Georgia from 2012 to 2014 ? never had the chance to wear the black alternate game jersey as a Bulldog.

Give the people what they want, Kirby Smart. Let the kids celebrate another incredible season by rocking the Black Out Jerseys during a nationally-televised game.

UPDATE: Ahead of Georgia’s showdown with Notre Dame, the UGA Spike Squad began a campaign on social media using the hashtag #BlackoutNotreDame. In a matter of hours, it’s taken off like wildfire amongst the fan base.

College GameDay was on hand, which meant all eyes were on the game and massive matchup. UGA football didn’t bring back its black jerseys, which only increases the wait until one of college football’s sharpest traditions (finally) returns.

This article was originally published July 24, 2019, but I won’t stop until UGA’s iconic threads make a comeback.