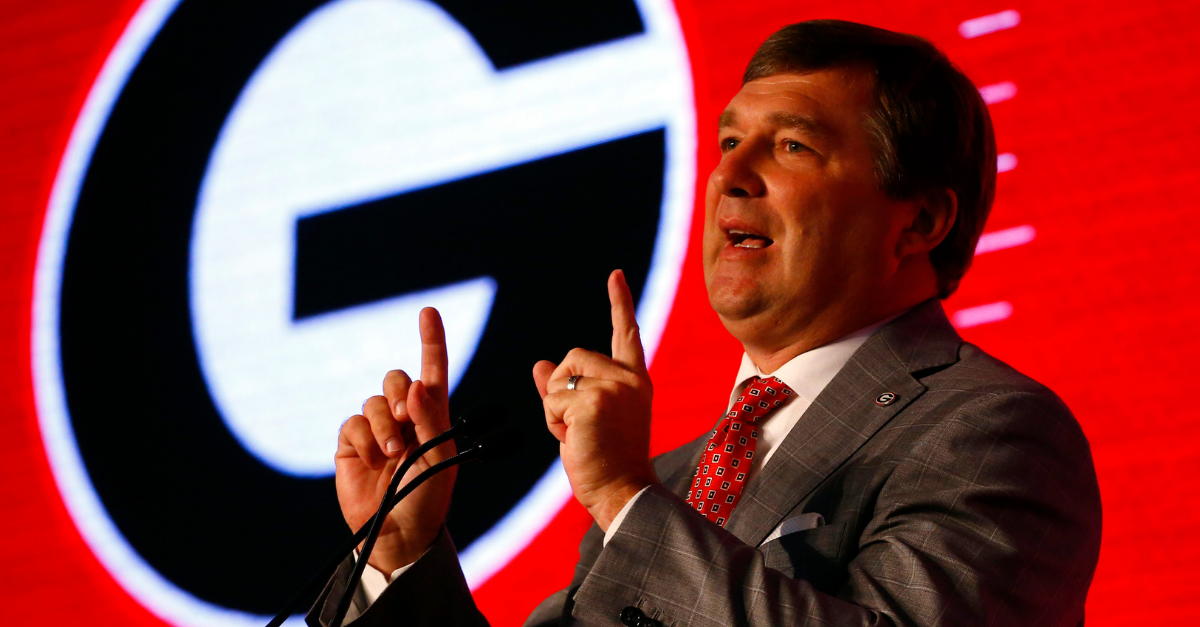 If you’re bringing up the Florida-Georgia football rivalry, you better prepare for a full-blown war. Nicknamed the “World’s Largest Outdoor Cocktail Party,” the annual meeting between SEC East powerhouses takes place at TIAA Bank Field in Jacksonville, and it is more important than any other regular season game.

Since 2006, the winner of Florida vs. Georgia won the SEC East division title and advanced to the conference championship in nine of 13 seasons.

This rivalry means more than most, so you’ll seldom hear friendly comparisons between the two college football programs. But fans on both sides were treated to a cringe-worthy moment at SEC Media Days on Tuesday when Georgia head coach Kirby Smart addressed the media.

In an interview with SEC Network, Smart discussed the impact of having Jake Fromm back at quarterback once again. The Heisman Trophy candidate is considered a top-tier prospect for the 2020 NFL Draft, so he’s naturally going to get comparisons from every corner of the college football world.

But you’d never think one would come from Smart and bring about the Florida Gators and former Bulldog-killer Tim Tebow.

“(Fromm is) strong ? and he?s strong in his faith. You know, I relate it a lot of times ? and people are going to cringe when I say this ? to the way Tim Tebow was, when you think about how strong he was in his belief with who he is.

“He has a not-ordinary confidence in himself, and what he believes. He has an ability to lead in that locker room without alienating people and without running people the wrong way. I think that speaks volumes to the team we can become ? because when he speaks, they listen.

“When things don’t go well, he absorbs that responsibility and takes it upon himself, just like I do.”

As players, Jake Fromm, a classic pocket passer, and Tim Tebow, maybe the greatest dual-threat QB in collegiate history, are polar opposites. But as charismatic leaders, role models, men of faith, and team captains, this comparison makes sense, even if it ruffles some feathers in both Athens and Gainesville.

In three career starts against Georgia, Tebow completed 71 percent of his passes, throwing for 554 yards, rushing for 109 yards, tossing five touchdown passes against zero interceptions, plus he tacked on seven rushing touchdowns. Most importantly, Florida won two of those games (2008 and 2009) by a combined score of 90-27.

Evoking the name Tebow certainly warrants Smart saying “people are going to cringe,” but at least he knew what he was getting himself into beforehand.

After the game @FrommJake leads the post game prayer with players and coaches at midfield pic.twitter.com/8o2hQ52QPJ

Smart is entering his fourth year leading the Georgia Bulldogs, so he’s a veteran of Media Days at this point. The 43-year-old head coach brought three players ? junior quarterback Jake Fromm, senior defensive back J.R. Reed, and junior left tackle Andrew Thomas ? to represent UGA on Tuesday in Hoover, Alabama. Smart talked about the NCAA Transfer Portal’s impact on the Southeastern Conference, changes to his coaching staff, and the high expectations for his program.

“One of the themes our players have adopted this year has been to do more. It’s a great theme because it’s simple,” Smart said. “We like it because we understand how close we’ve been to taking the next step. And although 24-5 the last two seasons is good, it’s not good enough. It’s not where we expect to be at the University of Georgia.”

Georgia begins its season on the road against Vanderbilt with the hopes of finally overcoming Nick Saban and the Alabama Crimson Tide, a program that’s ended UGA’s national championship dreams two years in a row.