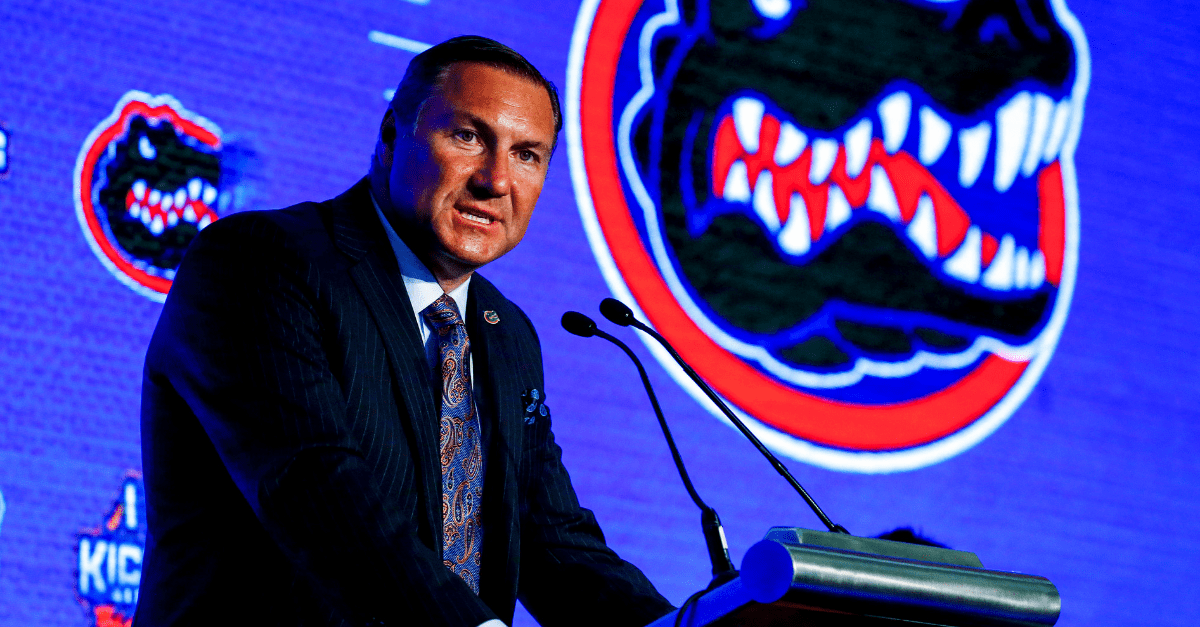 The 47-year-old football coach tweeted a picture of his custom Gator-inspired Nike Air Jordan XIs ahead of his team’s turn on the podium at SEC Football Media Days in Hoover, Alabama. Despite getting jabbed by his rivals, the second-year leader of the Florida Gators laced up his sneakers and was all business as he set the table for his program heading into the 2019 college football season.

Media days officially usher in the start of the football season. Monday started with Southeastern Conference commissioner Greg Sankey discussing the declining mental health of college athletes, and how the SEC is leading the charge to reverse the trend. Sankey also addressed potential gambling in college football and changes to officiating in SEC play, which will include more communication and performance reviews for SEC game day crews moving forward.

When Mullen took the podium ? he was accompanied by quarterback Feleipe Franks, running back Lamical Perine, and defensive end Jabari Zuniga ? Florida’s leader addressed questions ranging from UF’s opening-weekend tilt with the Miami Hurricanes to implications of the NCAA Transfer Portal and much more.

After addressing the death of iconic University of Florida fan and legend George Edmondson ? affectionately known on campus as Mr. Two Bits ? Mullen talked about UF’s goals for his second season in Gainesville.

“I think we took great strides in our first year in the program. You know, when you look in year one, you get a ten-win season, you finished ranked sixth in the country in the final polls, it was really exciting. It showed how fast our guys bought in to what we’re trying to do and what we’re trying to build. And we have a great group of guys coming back, a lot of talented players coming back on this year’s team that now have won games and have high expectations and understand what the Gator standard is all about.

“It’s about competing for championships every single year. And the positive attitude we have is really exciting.”

When asked about Feleipe Franks’ development as he enters his redshirt junior season, Mullen raved about Franks’ commitment to the University of Florida and for getting better every week last year.

“I think as the year went on, he understood what his abilities were and he decided to use all of his talents. I think a light came on that I’m 6’6”, 245 pounds and pretty athletic. If they’re going to completely empty the middle of the field and I can run into the end zone from 20 yards away untouched, I can do that.

“And I think when he bought in to using all of his skill set to play, and not trying to limit himself or not trying to worry really about what everybody else thought, he was going to be a better player, and he did that. I think he started to block out all of the outside noise, all of the other opinions.”

Mullen, who identifies as a Boston Red Sox fan, even joked about Franks recently signing a minor league contract with the MLB club this offseason.

“He’s still working on his accuracy. I don’t know if I’d want to get in the batter’s box if he’s throwing 95 [miles per hour],” Mullen said. “But I think it’s great. I think it’s a great honor for him to have that opportunity.”

RELATED: This Florida Gators Man Cave is One of the Best You’ll Ever See

After addressing the impact of the massive Florida-Miami rivalry to begin the 150th season of college football, Mullen commented on Commissioner Sankey’s remarks about mental health, and how important a role the University of Florida plays in keeping student-athletes focused while under a massive microscope in today’s world.

“Monday morning they still got to go to class with everybody else. They still got to make sure they’re turning in their papers, getting their assignments done, get in the classroom and complete their degree and continue to work that way.

“So there are those pressures that come from them. Not just the time responsibilities and the physical strain of playing football, but the emotional responsibilities of the pressure, be it 19 years old and having everybody really critique your performance.

“And then just that maturity. I mean, college is such a big maturing time for young people. You are 18 to 22 years old and how you learn about yourself, find out about yourself. A lot of guys it’s the first time ever being away from home. You’re growing and finding out about yourself, and a lot of these guys are having to do it under a spotlight with a lot of people watching them and critiquing everything they do.

“I think it’s huge. We spend a lot of time with our team on developing every aspect of their life, of maintaining not just their physical health, their mental health, their emotional health, and allowing them to continue to grow and develop in every way possible and expose them to as much as possible so they can learn.

“Our ultimate responsibility for me as the head coach is to make sure, when these guys walk out the door, that they’re prepared for whatever the world is going to throw at them. I think everybody gets caught up in the 1 percent that go on to play professional football. But there’s a lot of guys in our program that have a whole life ahead of them when they go leave, and we have to make sure they are prepared for whatever life is going through with them.”

Mullen talked about the possibility of The World’s Largest Outdoor Cocktail Party ? UF’s annual rivalry game against the Georgia Bulldogs ? potentially moving from a neutral site game in Jacksonville to a home-and-home series between the SEC East rivals.

“I know there’s Florida/Georgia. There’s Texas/Oklahoma. And there’s Army/Navy… That’s something special to say that you got to play in this very special unique game. But you can also see and make the argument the other way of how big a game it is. You’re taking one of your biggest rivalry games every year and you’re moving it off campus where you can’t host that in your home stadium for your fans, all of your season ticket holders for recruiting.

“I think you can make arguments on both sides of why it should stay in Jacksonville, why it should leave Jacksonville, and be a home and home. Then it’s interesting, I think it will be an interesting discussion the next couple years of when the contract runs up of what the future is going to be for that game.”

As for the transition from year one to year two, Mullen believes that the high expectations inside and outside his football team’s locker room, as well as potentially challenging for a College Football Playoff national championship, is exactly what he wants his players to focus on.

Mullen joined Missouri’s Barry Odom and LSU’s Ed Orgeron on Day 1 of SEC Media Days. The remaining schedule of teams and head coaches that will address the media follows below.

NEXT: Texas-Florida to Meet on the Gridiron After 90 Years