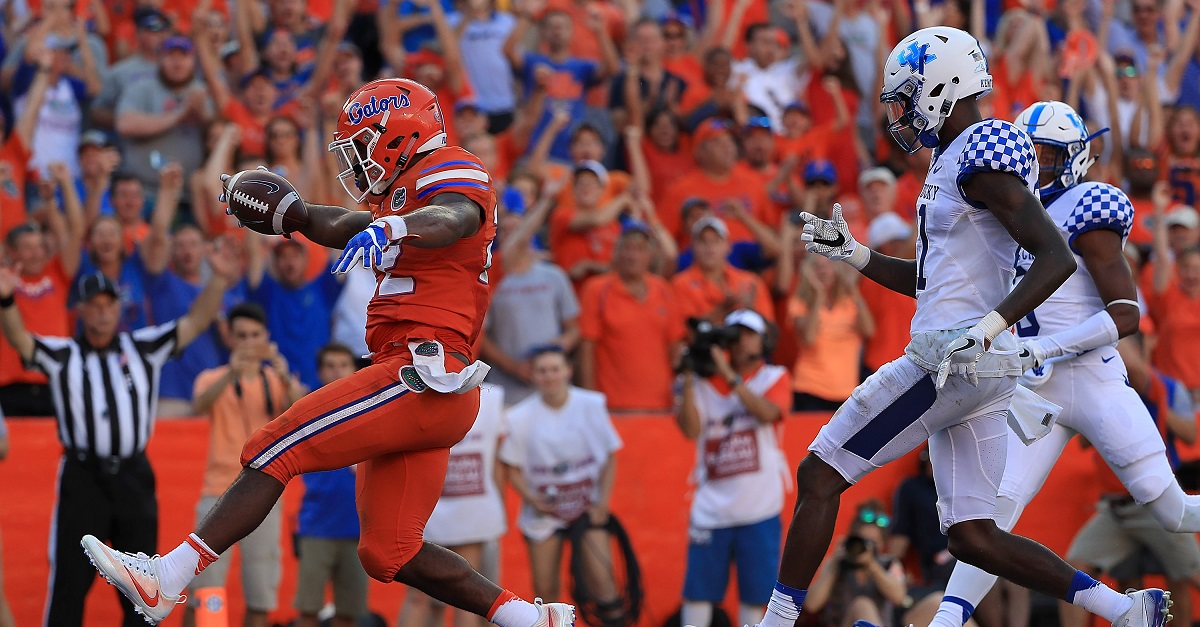 I still see Reggie Bush’s insane run against Fresno State like it was yesterday. The former USC running back was in the middle of a Heisman Trophy season, which included that famous stop-on-a-dime-and-cut-across-the-field move en route to 513 all-purpose yards. It was only the second time in history a player eclipsed the 500-yard mark in a single game. Sadly, like pretty much everything else in Bush’s illustrious collegiate career, that night was erased from the NCAA record books after Bush received “lavish gifts” while he was a student. (Yeah, the NCAA kind of sucks.)

Still, it is moments like those that college football fans will always remember. Few players in history were as electric as Reggie Bush was with the USC Trojans, so any endorsement from him should not be taken lightly. And if you’re a Florida Gators fan, prepare for a huge vote of confidence for senior running back Lamical Perine.

Bush was hired by FOX Sports to become part of a brand new broadcast team for the upcoming season alongside Urban Meyer, Matt Leinart, Brady Quinn and host Rob Stone. The Super Bowl champion and two-time All-American took to Twitter on Sunday night and gave his vote for “Most Versatile Playmaker in the Country” to Florida football’s star running back.

The title tells you everything you need to know about this young kid! Had to split carries last year with Jordan Scarlett but I think this will be his break out year! Most Versatile Playmaker in the Country 💯 Official La'Mical Perine H… https://t.co/yu8e8r8uVl via @YouTube

RELATED: This Florida Gators Man Cave is One of the Best You’ll Ever See

Finally getting his chance to shine as UF’s premier ball carrier in 2019, Perine is flying up lists as one of the best playmakers in the Southeastern Conference. In coach Dan Mullen’s run-heavy offense, Perine led the Gators in rushing for the second year in a row in last season. Despite splitting carries during his first three seasons, Perine needs only 600 rushing yards and seven touchdowns to crack Florida’s top-10 career lists.

The Theodore, Alabama native was rated as the No. 28 running back of the 2016 recruiting cycle, according to 247Sports. Still, that hasn’t slowed him down from being explosive between the tackles, dangerous on the perimeter catching the football, and elusive when he reaches the second level.

Before he’s done in Gainesville, Perine could very well put up one of the greatest statistical seasons by a running back, joining iconic Gator rushers like Errict Rhett, Earnest Graham, Fred Taylor, Jeff Demps, Chris Rainey, and the great Emmitt Smith.

Being endorsed by none other than Reggie Bush is enough to know that Perine, whose brother is NFL running back Samaje Perine, is the real deal. But if that’s not enough to convince you, watch the 210-pound running back tear up the SEC in his final season, then you can decide if he’s one of the nation’s best for yourself.