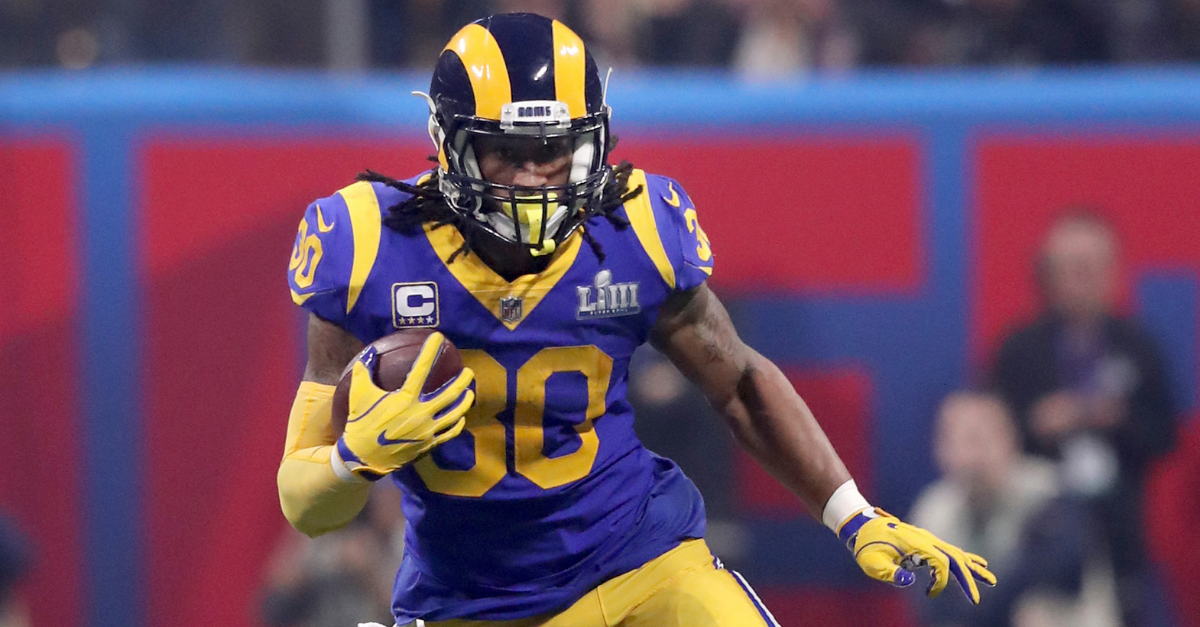 Something was wrong with Los Angeles Rams running back Todd Gurley during Super Bowl LIII. While the New England Patriots are credited with keeping LA’s high-powered offense in check all game long, the Rams’ All-Pro ball carrier was basically non-existent. In the first half, Gurley touched the ball three times. He finished with only 10 carries. The game prior, during the NFC Championship, the NFL’s highest-paid running back carried the ball only four times. Backup C.J. Anderson filled the void, but missing Gurley’s talent for much of the postseason proved fatal.

According to a conversation Gurley had with former NFL running back Maurice Jones-Drew, a knee injury during Week 1 of the 2018 regular season progressively worsened as the year went on, and that was the cause of his late-season breakdown. But new reports detail something far worse, and it could put the Georgia Bulldogs icon, and his NFL legacy, in serious jeopardy.

Gurley’s trainer Travelle Gaines told CBS Sports that the 24-year-old star is dealing with an “arthritic component to his knee,” which developed after a torn ACL back in college against Auburn. Despite that setback, the Rams selected Gurley No. 10 overall in the 2015 NFL Draft, and he went on to win NFL Offensive Rookie of the Year.

“Everybody knew when Todd came out of Georgia that there would be some kind of arthritic component to his knee, which is part of every surgery whether it’s a shoulder, a knee, an ankle,” Gaines said. “He’s now at the year-five mark, all we’re doing is managing that.”

Gaines added that Gurley’s plan to lose about six pounds this offseason ? dropping his playing weight from 224 to 218 ? had nothing to do with knee issues that hampered him last season.

“He got a little tired toward the end of last year because he was carrying the ball a lot. Could he have played last year? Yeah, but when you already have the division and seeding clinched, what was the point?”

It’s not just the significant drop in production that created concerns, it was the complete absence of concern in the first place from the Los Angeles Rams, head coach Sean McVay, and Gurley himself. Typically, players and coaches downplay the severity of minor injuries. It’s the nature of the business.

But this feels like Gurley’s camp is pulling the veil over our eyes on a serious issue. The NFL’s rushing touchdown leader two years running is entering a long-term deal worth $57.5 million, and $45 million guaranteed. They won’t admit it, but a 24-year-old football player with the phrase “arthritic component” floating over his head is a bad omen, no matter how much this issue gets downplayed.

Adding more fuel to the fire, Los Angeles re-signed Malcolm Brown to a two-year deal and drafted Memphis’ Darnell Henderson in the third round of the 2019 NFL Draft. Henderson finished second in the NCAA in rushing yards (1,909), rushing touchdowns (22) and led all of college football at 8.92 yards per rush last season.

“I had bigger problems to worry about coming out of college,” Gurley told reporters after sitting out during OTAs in June. “This is small.”

We’ll see how “small” Todd Gurley’s knee issue is when the Rams reach critical playoff weeks in December, January, and possibly, even February.

NEXT: Mark it Down: Bears Safety Predicts to Win Super Bowl LIV