In college football, well, any football, it's considered a win for the defense when an opponent can be held to a field goal attempt in the red zone as opposed to a touchdown.

Such was the case for the Iowa State defense, which must have been feeling this early in the second quarter, after tackling Oklahoma running back Eric Gray for a 1-yard loss on 3rd and Goal from the 1-yard-line. With the game deadlocked at 3-3, Oklahoma head coach Brent Venables had a decision to make. Send out kicker Zach Schmit for the 19-yard field goal attempt, or try to get the ball into the end zone on 4th down. In typical Big 12 fashion, the Sooners head coach chose neither. And both. 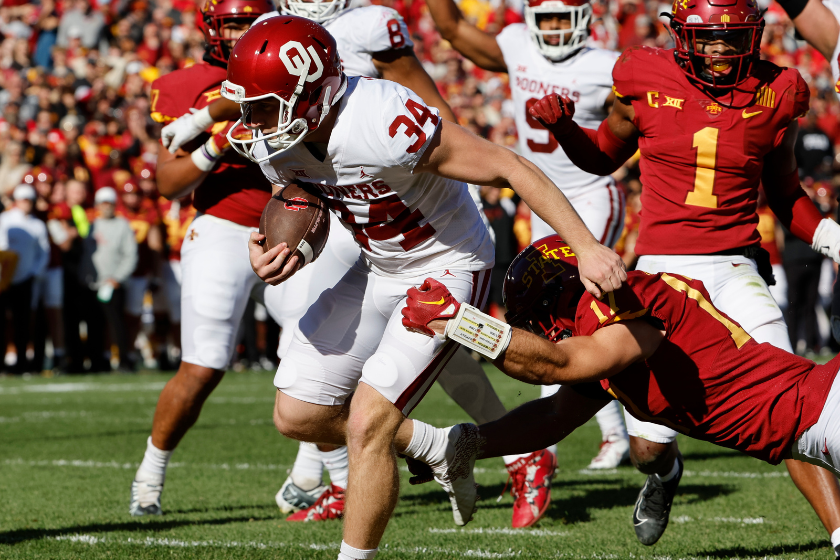 RELATED: Brian Bosworth Dominated College Football, But Where is "The Boz" Today?

Instead of three points from a field goal, Oklahoma dialed up a fake field goal, resulting in a touchdown. Oklahoma punter Michael Turk took the snap and pitched it to kicker Zach Schmit who, at first glance, appeared to be in normal kicking stride. Instead, he collected the pitch, running it straight up the middle into the end zone. What goes down in the box score as a 2-yard touchdown pass and reception was in fact a 10-yard touchdown run. With 12:23 left in the first half the Sooners would take a 7-point lead, and the Cyclones would never re-tie the game.

Honestly, it was a unique design for a fake field goal and a surefire ESPN Top 10 highlight. I cannot think of a similar attempt by a football team in either the NCAA or the NFL. My favorite part of the whole play might be that Turk finished the game with a higher QBR than actual Oklahoma QB Dillon Gabriel, who finished the game with one touchdown pass of his own and no interceptions.

This game could be seen as Venables opportunity to turn Oklahoma's season around. With Oklahoma State as the only team left on their schedule and that remain on the USA Today and Associated Press rankings, the Sooners are in prime position to finish the season in line for a good bowl game. With the way Oklahoma State got blown out, West Virginia should be considered the toughest opponent left after giving undefeated TCU all they could handle in one of the best games of the weekend. But the best play clearly goes to Oklahoma's fake field goal touchdown pass, a play that helped the Sooners leave Ames with a solid W.