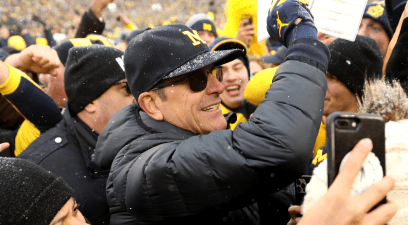 Once upon a time, Jim Harbaugh was the biggest splash hire in the country. Most any team ? whether in the NFL or the college football ranks ? would have loved to have him as their head coach. He ultimately chose to return to Ann Arbor with the hopes of leading the Michigan Wolverines back to national prominence. Instead, his entire tenure has been stuck in neutral.

Harbaugh, who played quarterback for UM back in the day, clearly loves his alma mater, and the feelings are seemingly mutual. His success at Stanford and with the San Francisco 49ers helped make him one of the highest-paid coaches around, too. Yet, for one reason or another, the big wins simply haven?t followed.

Sooner or later, the patience will wear thin and trust will run out. It?s already an awkward situation, but it has the potential to get worse. Perhaps Harbaugh should leave Michigan before his time runs out.

Jim Harbaugh is now 2-8 in AP ranked matchups when his team is on the road as head coach of Michigan.

That’s the most losses by any head coach since 2015. pic.twitter.com/D551bpw6to

Michigan head coach Jim Harbaugh has one year left on his contract. He makes roughly $8 million annually and his buyout is a measly $6.3 million. It?s easily the lowest buyout clause of any big-name coach, by a mile, according to USA Today.

That doesn?t make the University of Michigan?s next move any less difficult.

What should the Wolverines do? Should the athletics department give him a contract extension and hope Harbaugh can turn the corner at his beloved alma mater? Should they fire him and press the reset button? Should they ride it out and then part ways?

The coronavirus pandemic and COVID-19 outbreak has put universities across the nation in a financial bind moving forward. Giving Harbaugh more money might seem like a safe option for the sake of the NCAA program, and its recruiting efforts on one hand, but incredibly risky on the other.

Jim Harbaugh was hailed to be the savior of Michigan football, and while they've improved in some areas, they're still not where they want to be. pic.twitter.com/DTXj2N7QBI

The record speaks for itself. Harbaugh is 68-48 as the Michigan football coach, including a dismal 1-2 start to the 2020 campaign. He?s 1-4 in bowl games in Ann Arbor, including losses in the last four to Florida State (Orange Bowl), South Carolina (Outback Bowl), Florida (Peach Bowl), and Alabama (Citrus Bowl).

Forget making College Football Playoff and facing teams like Clemson and LSU in primetime on ESPN; Harbaugh hasn’t even won the Big Ten Conference since he was hired. He can?t beat Ryan Day and the Ohio State Buckeyes in “The Game.” The Wolverines football team even struggles with in-state rival Michigan State Spartans, including a loss to Mel Tucker?s squad in 2020.

No matter how many NFL Draft prospects are on the roster, not taking care of business against OSU and MSU is obviously concerning. Sure, beating the likes of Minnesota, Nebraska, Iowa, Maryland, Rutgers, Indiana, Wisconsin, and Penn State during the regular season is nice, but what about winning the Big Ten Championship Game? Isn?t that what he was hired to do?

With each loss, confidence fades. Michigan fans go crazy on social media and rant about the program trending in the wrong direction.

NFL rumors have always swirled around Harbaugh, too, but the Michigan coach always seem to deny them. He does it time and time again.

?I don’t really have anything to really say to that, because I don’t have an interest in listening to that kind of stuff,? he said recently. ?I think you know me by now. I always like letting the action speak for what you have to say. I’ve always thought this: your actions speak so loudly that people can’t even hear what you’re saying. I’ll let the actions speak as they have in the past.?

Harbaugh is a good coach. He might even be a great coach. But it?s not at Michigan, and definitely not at the moment. He should go back to the NFL and hunt Super Bowl appearances, and not continue to compete with programs such as Georgia, Notre Dame, and Texas A&M on the recruiting trail. That decision alone could help avoid an awkward situation.

The choice is his right now. It might not be in the coming months.

MORE: Who is Jim Harbaugh?s Wife & His 7 Children?