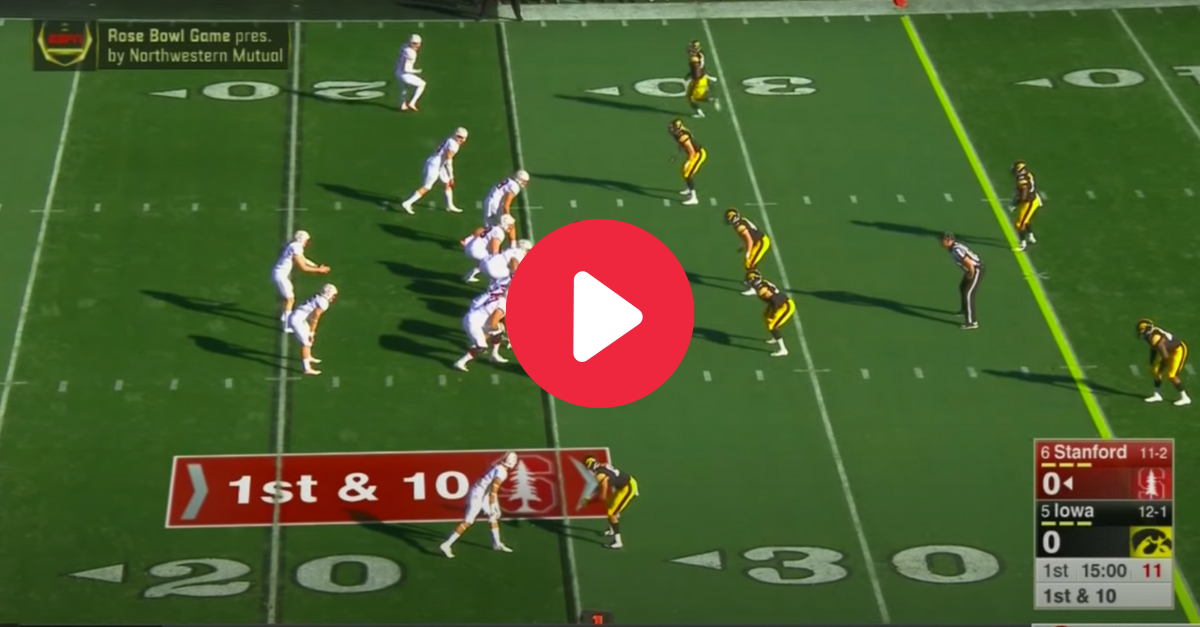 Before kickoff of the 102nd Rose Bowl Game, the entire college football world knew about Stanford Cardinal running back Christian McCaffrey. They knew he was dangerous and could score a touchdown at any moment. The Iowa Hawkeyes either forgot, weren?t prepared, or didn?t exactly believe the hype. Regardless, they found out the hard way.

McCaffrey, who finished second to Alabama?s Derrick Henry in the Heisman voting that season, broke the Rose Bowl record with 368 all-purpose yards in Stanford?s 45-16 rout that Friday afternoon. He also became the first player in Rose Bowl history to record at least 100 rushing yards and 100 receiving yards in the prestigious bowl game in Pasadena, Calif.

The record, which was previously held by Wisconsin’s Jared Abbrederis against Oregon, was officially his. It all started on the very first play from scrimmage when McCaffrey caught a 75-yard touchdown pass.

RELATED: Ezekiel Elliott Ran 85 Yards ?Through The Heart of the South?

Many people thought Stanford running back Christian McCaffrey was the best player in the country before the game. He had already broke the NCAA single-season all-purpose yardage record once held by Barry Sanders, for crying out loud. It took just a few seconds live on ESPN to verify his greatness.

Not a second had gone off the clock in the first quarter. Not a single second. Then, in the blink of an eye, Stanford quarterback Kevin Hogan found Christian McCaffrey over the middle and the Heisman Trophy runner-up sprinted into the end zone untouched for a 75-yard touchdown.

It was the second-longest touchdown in Rose Bowl history, and the longest play Iowa?s defense gave up all season, according to ESPN. Michael Rector also caught two touchdowns for Stanford.

And if that wasn?t enough, McCaffrey also housed a 63-yard punt return for a touchdown in the second quarter.

McCaffrey finished the 2016 Rose Bowl with 18 carries for 172 yards on the ground, four receptions for 105 yards, and added 91 kickoff return yards.

“I think he was the best player in America before this game, so I think it’s just the icing on the cake,” Stanford head coach David Shaw said. “I do think it’s a shame that a lot of people didn’t get to see him during the course of the year. Apparently the games were too late.?

Whether it was running the ball behind his massive offensive line, catching a TD pass against a linebacker, or on kick returns, McCaffrey dazzled throughout the regular season, especially during Pac-12 play. So what if Stanford didn?t make the College Football Playoff that year. The Cardinal faithful knew they had a superstar.

Christian McCaffrey, now a star in the NFL, proved it again that day and left Iowa quarterback C.J. Beathard and head coach Kirk Ferentz, which lost to Michigan State in the Big Ten Championship Game that year, in the dust.

It?s not the first time he made the opposing sideline look foolish. It?s also not the last, and McCaffrey will get back to business once the coronavirus pandemic and COVID-19 outbreak allows it.