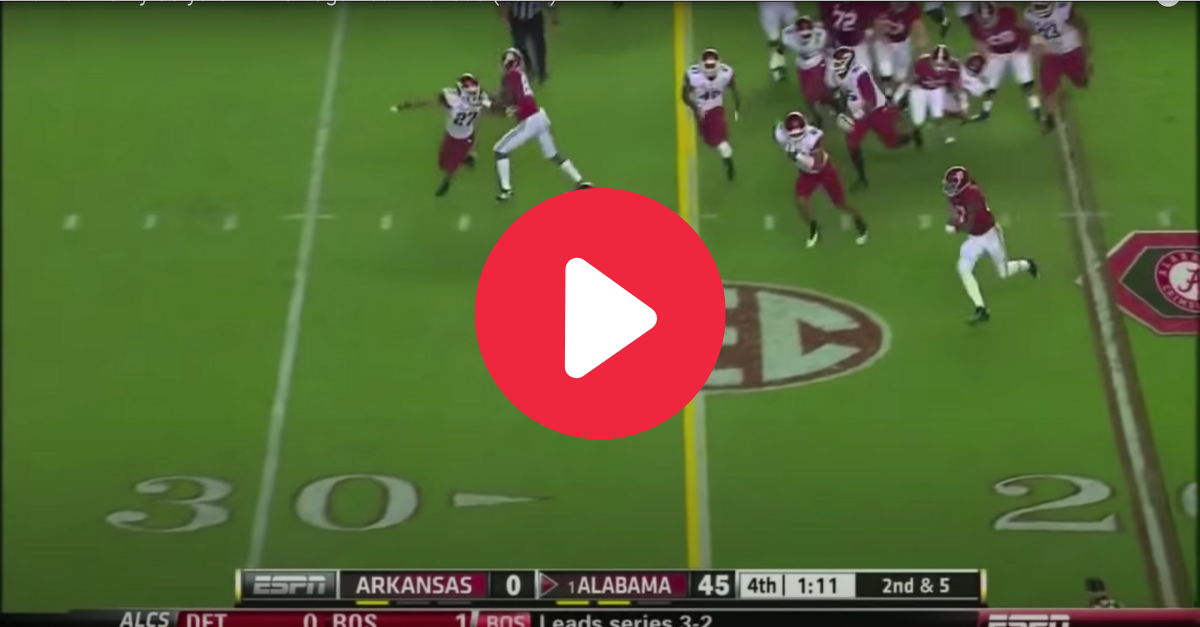 Derrick Henry is the greatest running back in Alabama Crimson Tide history. The 6-foot-3, 250-pound beast owns the career and single-season yardage marks and won the Heisman Trophy in 2015, setting himself apart from everyone who ever toted the rock in Tuscaloosa.

The pride of Yulee High School set records pretty much every step of the way in his football career. Henry accumulated more rushing yards playing prep ball in Florida than anyone in high school football history. He then scored 42 touchdowns for Nick Saban’s team and won a College Football Playoff National Championship in 2015.

Henry has since proved his prowess in the NFL. He has a 99-yard touchdown against the Jacksonville Jaguars to his name and proved he was the best of the NFL backs when he won the rushing crown in 2019. The Tennessee Titans running back was a major reason the club took down the New England Patriots and Baltimore Ravens in the NFL Playoffs.

The magic number is 236. That’s how many touchdowns he’s scored between high school, college and in the NFL as of the 2019 campaign. His  first in a crimson red jersey was just as magical as you’d expect.

*Alvin Kamara was also on this roster* 😳 pic.twitter.com/qMDZ831GXf

Henry was already the most accomplished high school running back ever when he was a freshman with Alabama in 2013, having rushed for more yards his senior year of high school alone than he did over his entire NCAA career.

As a 230-pound freshman, he played third fiddle to future fellow NFL backs T.J. Yeldon and Kenyan Drake. He still saw snaps, just sparingly. His first ever attempt? Negative three yards against season opener Virginia Tech. He received a handful of carries in each of the following games.

He didn’t break out until Alabama played the Arkansas Razorbacks on October 19, 2013.

Garbage time or not, Henry scored an 80-yard touchdown run in the fourth quarter that showed off all the skills that would eventually make him an All-American Heisman winner.

“Oh, I’m one of Derrick’s biggest fans,” Kenyan Drake told AL.com of his teammate after the game. “That’s his favorite thing to hit that outside corner, and I always tell him, when you do it, I know you’re going to show your speed, so don’t let nobody catch you from behind. And he sure didn’t do that.”

Alabama won the game, 52-0. Henry finished the game with 111 rushing yards on six carries. It marked one of many times he’d eclipse the century mark in a game. Alabama fell to Auburn in the Iron Bowl that year, then he rushed for 100 yards on eight attempts in the team’s loss to Oklahoma in the Sugar Bowl the following game.

The rest of Derrick Henry’s SEC career is history. He totaled 200 or more rushing yards four times in 2015 (Auburn, Texas A&M, LSU, Mississippi State) then capped his legendary season by scoring three rushing touchdowns against the Clemson Tigers in the national championship game.

Henry left Alabama with a plethora of school records. He nearly took the Titans to the Super Bowl had they not played Patrick Mahomes and the Kansas City Chiefs in the AFC Championship Game.

Just remember where he first made a name for himself.