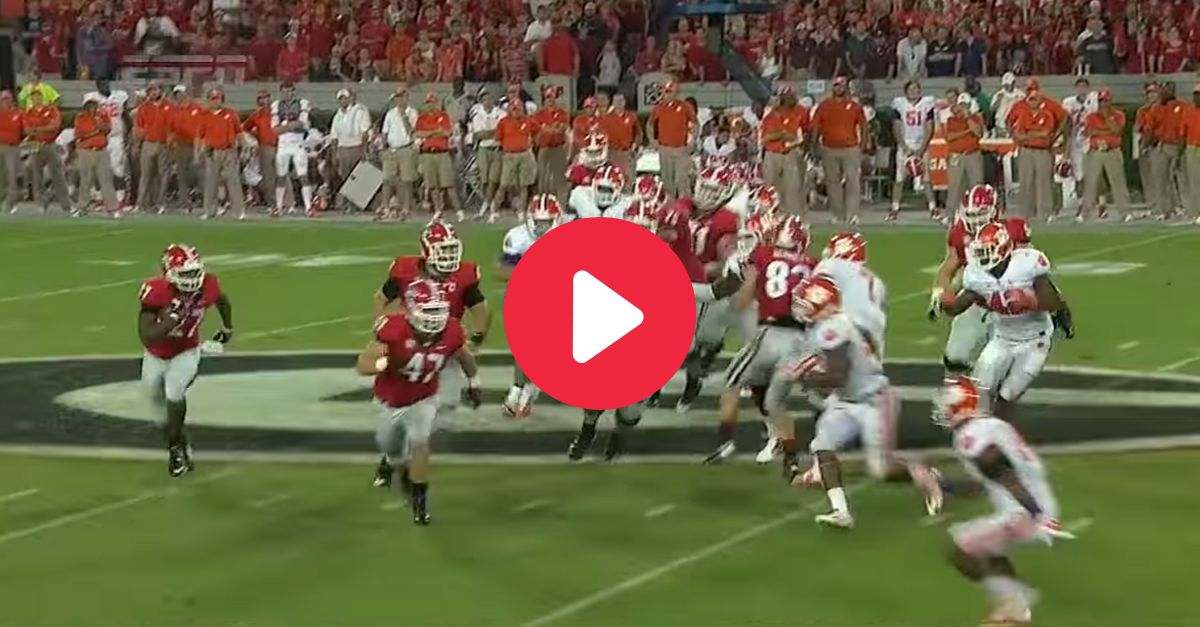 The 2014 Georgia Bulldogs were supposed to be Todd Gurley’s team. Right out of the gate, it was apparent no one was stopping the two-time All-SEC selection as the 12th-ranked Bulldogs hosted No. 16 Clemson in the season opener. On Georgia’s second drive, Gurley scored his 35th career touchdown on a 23-yard run. In the second quarter, Gurley returned a kickoff 100 yards for his 36th, and his 37th and 38th touchdowns came in the fourth.

Mark Richt’s squad rolled Dabo Swinney’s Tigers by the final score of 45-21. The celebration afterwards was all about Gurley, who began his junior season in Heisman Trophy-caliber fashion with a school-record 293 all-purpose yards. But another UGA running back arrived that day, and he ended up blowing Gurley’s career numbers out of the water in Athens, Georgia.

If Herschel Walker is the Batman of Georgia running backs, there’s no doubt Robin is Nick Chubb.

Chubb arrived at the University of Georgia as one of the best backs in America. During his time at Cedartown High School, Chubb was ranked as the No. 1 player in Georgia and No. 4 running back nationally by 247Sports. During his junior and senior seasons, he totaled 5,411 rushing yards and 79 (!!!) touchdowns.

It didn’t take long to make his mark in college football.

His second career carry came in the fourth quarter of that Clemson blowout. Quarterback Hutson Mason pitched Chubb the ball as he headed right, and a highlight reel run began. The true freshman slipped inside the first tackler, powered through three Clemson defenders, side stepped a helpless defensive back, then galloped down the sideline for a 47-yard touchdown run.

At one point, the 225-pound mauler lost his left shoe, running the final 35 yards with only one shoe on.

Chubb finished his first game with four carries for 70 yards and that touchdown, helping UGA’s offense pile 328 rushing yards onto a Clemson unit ranked No. 1 in total defense, No. 5 in rush defense, and No. 3 in scoring defense during the 2014 season.

He wasn’t even close to being done.

Gurley was infamously suspended four games by the NCAA that year after receiving $3,000 for signing autographs. In his first game back, Gurley tore his ACL, effectively ending his collegiate career; He entered the 2015 NFL Draft the following spring.

As for Chubb, he ran for 1,547 yards — fifth-most in school history — and scored 16 total touchdowns en route to earning SEC Freshman of the Year honors, making First-Team All-SEC, and earning Freshman All-American accolades by nearly every major publication.

His 266 rushing yards in the 2014 Belk Bowl against Louisville are the second-most in Georgia football history behind Herschel Walker’s 283. Chubb ranks second in career rushing yards (4,769) and career touchdown runs (44) at Georgia. Had he not split carries with backfield teammate Sony Michel, or suffered that horrific knee injury against Tennessee as a sophomore, Chubb may have challenged Walker’s school records.

The Cleveland Browns drafted Chubb 35th overall in the second round of the 2018 NFL Draft, and he made his first Pro Bowl in 2019.

There are many end zone highlights to come, but I’m not sure many will compare to Chubb’s first.