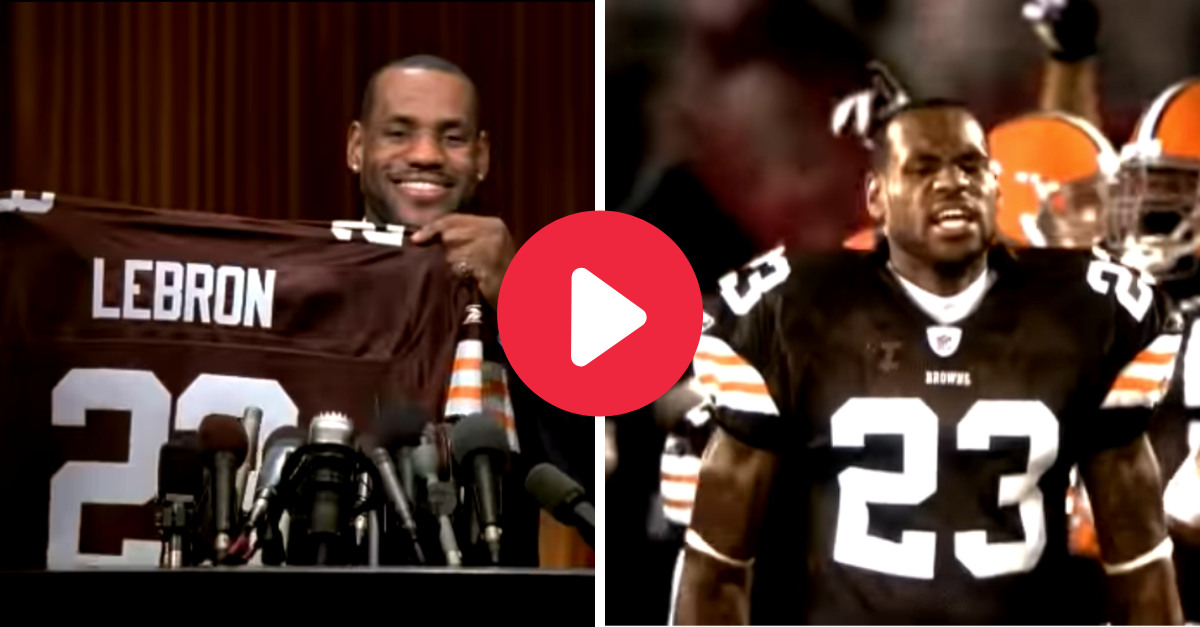 There’s no denying LeBron James is an athletic freak with a clearly different set of DNA from the rest of us. Since his rookie year with the Cleveland Cavaliers, the now Los Angeles Lakers superstar has executed gravity-defying dunks and hasn’t lost a step despite being 35 years old and cheering on Bronny James at high school games.

King James’ athletic gifts weren’t limited to the hardwood floor. The 6-foot-9 athlete was a “man amongst boys” playing wide receiver for his St. Vincent-St. Mary high school football team. So what if the NBA superstar pursued a life in the NFL instead of the NBA?

James’ hometown football team, the Cleveland Browns, even said in 2009 they would have given him a shot on the gridiron. James told ESPN he could be “really good” if he dedicated his life to the game.

Back in 2009, LeBron James gave everyone a glimpse of what the NBA superstar would look like as a wide receiver/tight end in the National Football League when he joined the Browns in a State Farm commercial.

Sources: Lakers to send LeBron to the Browns pic.twitter.com/SknvCVIX7m

The kid from Akron, Ohio grew up a huge fan of all of Cleveland’s sports teams. He was the face of the Cleveland Cavaliers for so many years and eventually brought them their first NBA championship in 2016.

James has always been a fan of the Browns. When the team traded for Odell Beckham Jr., he took to social media to spew excitement over a team that looked like an AFC contender with talent like Baker Mayfield, Myles Garrett and Jarvis Landry.

The King and a shirtless J.R. Smith also celebrated Cleveland’s first win in 635 days in 2018, which must have felt like winning the Super Bowl.

LeBron James did pretend to be a Browns player for a commercial, so he does know what he's talking about pic.twitter.com/j2bcVby12o

King James televised “The Decision” in 2010 and announced he was taking his talents to South Beach to play for the Miami Heat. He changed the course of NBA history with the move.

Before making the decision and winning two NBA Finals in Miami, he decided to choose not only a different team but a different sport by signing with his hometown Cleveland Browns.

In this State Farm commercial from 2009, James stuns the sports world and signs with the Browns.

“LeBrown” then lights up the NFL, scoring touchdowns, blocking field goals and dunking on goal posts. James is shown celebrating a Super Bowl victory before he’s woken up from his dream.

Man, this is the ultimate what-if.

I gotta say, I think LeBron would be ten times the football player Michael Jordan was a baseball player. Maybe that would settle the whole “greatest of all time” dispute.

There’s not a doubt in my mind James would be the first overall pick in any NFL Draft had he played. Shoot, he still probably could be.