For those that don't remember Brian Bosworth, he was the bad boy of college football in the 1980s. "The Boz" was the coolest, most badass player in NCAA football in the 1980s, and that's saying something considering some guy named Bo Jackson carried the football for the Auburn Tigers during that decade.

Bosworth put his patented neck roll to good use while playing for the Oklahoma Sooners, where he won two Butkus Awards for the nation's top linebacker. His signature bleach-blonde hair was often styled in a mohawk/mullet fashion with designs in the signs of his head. And who can forget the bandana wrapped around his forehead?

Bosworth's career as a football player ultimately didn't pan out thanks to a career-ending injury, which made him one of the biggest flops in NFL history. The Boz then set out for Los Angeles in hopes of launching an acting career post-football.

He's acted since 1991 and even landed a gig in Adam Sandler's "The Longest Yard." The 57-year-old former collegiate football star is still appearing in movies, TV shows and commercials more than 30 years later. 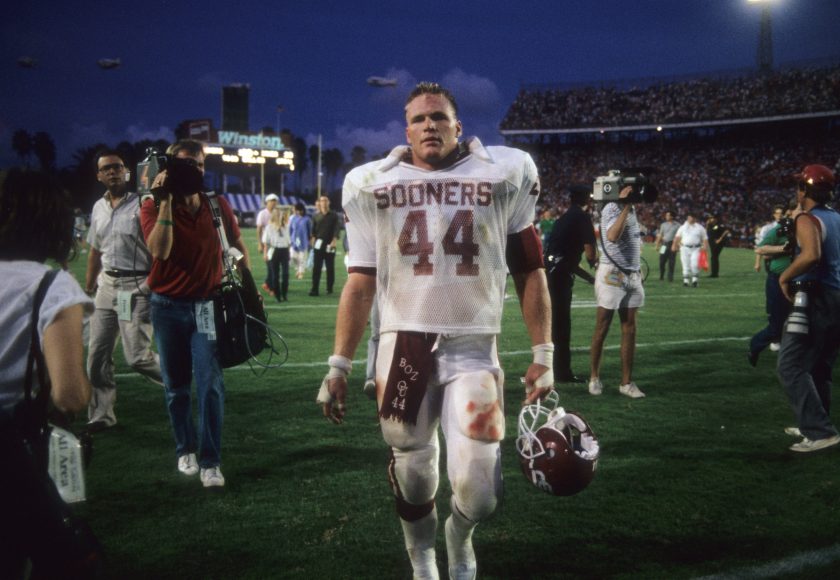 Bosworth was born in Oklahoma City, Oklahoma, and he stayed in-state to play for the University of Oklahoma. He blossomed into a two-time All-American linebacker under head coach Barry Switzer who won a national championship in 1985 and was named a Heisman Trophy finalist in 1986.

Much like Johnny Manziel, Bosworth didn't mind ruffling people's feathers. He was cocky but he was also an other-worldly talent. Maybe no incident brought negative attention to Bosworth than what took place in 1986. He and two Oklahoma Sooners players tested positive for anabolic steroids and were banned from playing in the 1987 Orange Bowl. The Boz then took a jab at the NCAA when he donned a shirt that read "National Communists Against Athletes" and "Welcome to Russia!" on the sidelines of that game. As a result, Switzer kicked him off the football team. 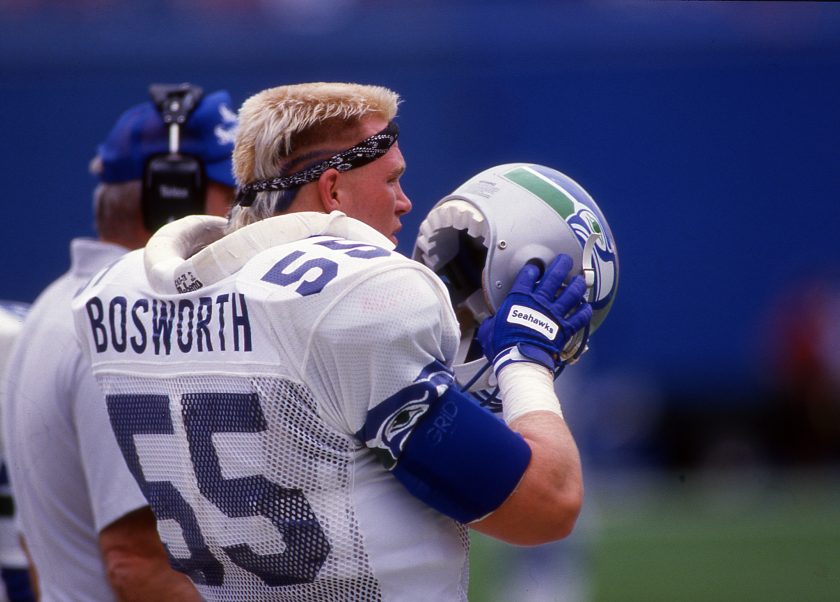 Bosworth sent letters to NFL teams saying he didn't want to play for them before even being drafted. One of those teams was the Seattle Seahawks, who changed his mind by giving him the the largest rookie contract in NFL history (talk about being a negotiator). He was drafted in the first round of the 1987 NFL Supplemental Draft.

Still, Bosworth's NFL football career was short-lived. Aside from running his mouth as a rookie and famously getting run over by Bo Jackson in a game, he never amounted to much thanks to a shoulder injury that cut his NFL stint short.

However, the Boz returned to Seattle in 2019 to raise the 12th Man flag prior to the Seahawks game against the San Francisco 49ers.

"I was humbled," Bosworth told 710 ESPN Seattle. "I just kind of teared up a little bit because it's one of those things that I've always dreamed of being asked to do."

Bosworth never quite lived up to the hype he produced in college in the National Football League, but he was inducted into the College Football Hall of Fame in 2015. He quickly found a passion outside the gridiron, though.

Transitioning from hard-hitting football player to gun-wielding action star in Hollywood is a task few have completed. It's also a task Bosworth wasn't fond of at the time.

"Right after my career ended in Seattle I really didn't know where to go. My agent kind of convinced me and said, 'Hey, come out here [to California] and we're going to make movies and stuff, and that's how we'll resurrect your career.' I was very, very uncomfortable with doing it because I never ever thought of myself as an actor; I always thought of myself as just an athlete, because that's what I trained for my entire life," Bosworth told Risen Magazine.

Bosworth has played all sorts of badasses since beginning his career in 1991. In his first role, he played a tough Alabama cop named Joe Huff who went undercover as John Stone in "Stone Cold" (1991), a movie that ultimately flopped at the box office.

Still, at least fans of Bosworth got an awesome fight scene:

The former college star acted in another action thriller in "Midnight Heat" (1996) as John Gray/Wayne Garret, a banker who exacts revenge on criminals for the murder of his wife.

More recently, he starred in the TV show "Ambitions" (2019) and plays a coach in "The Christmas Project Reunion" (2020), a sequel to Netflix's "The Christmas Project" (2016). But where fans may have seen him the most is in Dr. Pepper's "Fansville" commercials. He plays the sheriff, a role he's come to enjoy.

"The writing is brilliant. Tongue in cheek, it touches all the subjects, there's nothing that's off limits. They don't take themselves too seriously," Bosworth told The Oklahoman. "I hope they keep it going as long as they can, because it is so fun."

Bosworth is still maintaining his role for Dr. Pepper in 2022, and we're sure they have plenty planned for him this upcoming season. There's just something supremely awesome watching Bosworth go from football field villain to criminal-hunting good guy to fake town sheriff on the big screen.

Bosworth's football story is that of a fallen star, but he's been able to resurrect his name since his tumultuous time at Oklahoma. Here's to hoping he stars in the next "Fast and Furious" or the next version of "The Terminator." And please bring back that mullet hairstyle.

MORE: How Kevin Costner Getting Cut From His College Baseball Team Launched His Acting Career