Jim Harbaugh, head coach of the Michigan Wolverines football team, is an eccentric character in the college football history books. To be fair, he didn't become a booger-eating, mitten-handed, khaki pants-wearing icon of cringe when he arrived in Ann Arbor. No, Harbaugh's always been unapologetically authentic, marching to the beat of his drum in the NFL and in the Big Ten. However, fans feel a bit more comfortable keeping Harbaugh at arm's length, safely watching the college football playoff-bound Wolverines at home. However, FOX made a decision during the 2022 Big Ten Championship game against Purdue that scarred many viewers for life. Buckle up, everyone. The Jim Harbaugh "Ref Cam" will keep you up tonight. 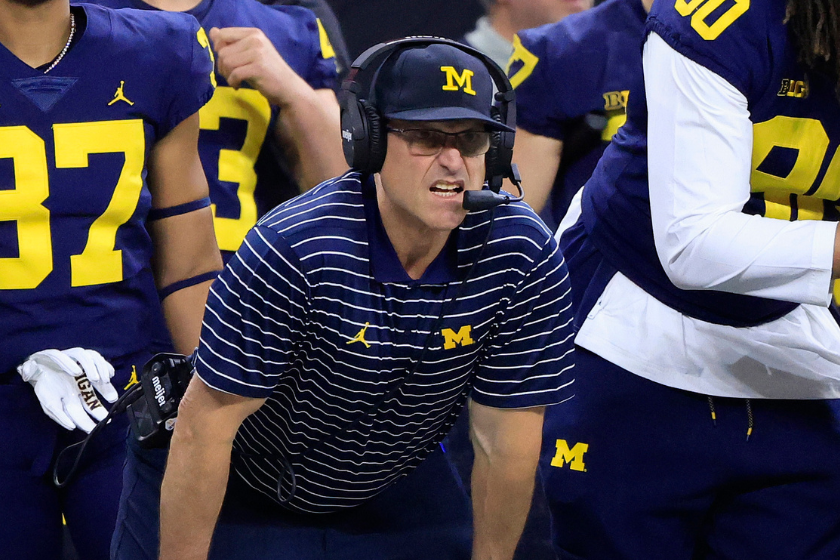 In the week following their massive rivalry win over the Ohio State Buckeyes and ahead of their announced No. 2 CFP ranking, coach Jim Harbaugh was in Indianapolis leading the Michigan football team in a Saturday night matchup against the Boilermakers on Championship weekend. The Big Ten title game felt like an underwhelming follow-up to the Wolverines' dismantling of Ryan Day's Ohio State squad. But, with Georgia winning the SEC title game, and both USC and TCU failing to secure their conference titles against Utah and Kansas State, Michigan's "easy win" was looking like it could be the third upset of the weekend. Who knows, if Michigan lost to Purdue, maybe Alabama wouldn't be No. 5.

So you can see how important this game was to Harbaugh, who is no stranger to big games. The first time Harbaugh lost a big game as a coach came when he faced off against his brother John Harbaugh's Baltimore Ravens in Super Bowl XLVII. Jim would lose that game by less than a touchdown, so it's understandable as to why he took this Big Ten title game so seriously.

What we didn't need to see was a high-definition look at that intensity.

You'd think Harbaugh was coaching the Buffalo Bills, Los Angeles Chargers, or Denver Broncos with this kind of fire in his belly. Nope, this is just how serious Harbaugh is all the time. Doesn't make it any less jarring. If ESPN or CBS had put this on TV, they'd probably have to toss a trigger warning on there. But let's also take a moment to acknowledge the MVP of this whole situation: the ref who is putting his life on the line to officiate a game in the vicinity of Jim Harbaugh's hurricane-like madness.