LSU, Les Miles Finally Agree on Contract Buyout, So Where’s He Headed Next? 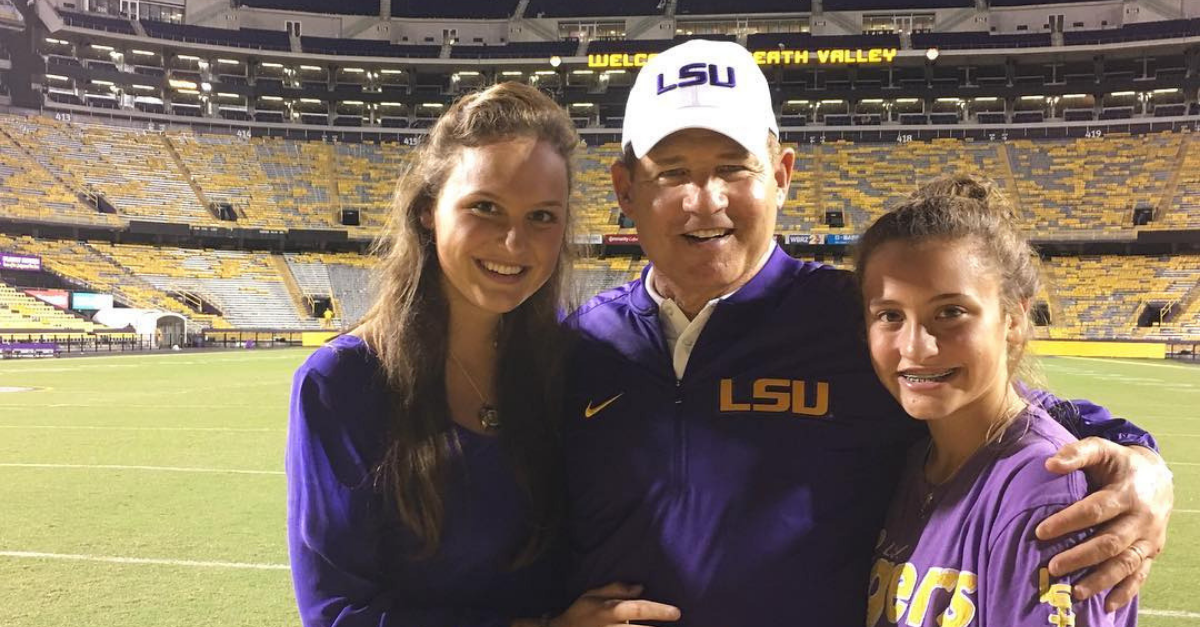 He was fired as the LSU Tigers head coach following a 2-2 start to the 2016 college football season, but head football coach Les Miles remained tied to Baton Rouge with the tail end of an 11-year contract still owed to him. Finally, the two have agreed on a buyout and can cut ties for good.

Louisiana State University and their former coach agreed on a $1.5 million lump-sum to avoid paying the remaining $6.5 million Les Miles was owed, and now it frees the 65-year-old head coach to pursue another head coaching opportunity.

At the time he was fired, the total buyout owed to Miles was around $9.6 million paid in monthly installments until 2023. LSU head coach Ed Orgeron took over and has built the program in his image, and they’re thriving so far.

As LSU Athletic Director Joe Alleva said in a statement, it was time for the school to move on and allow Miles pursue another opportunity.

“It’s time for both parties to move forward. One of the challenges of the buyout that was in place was there just wasn’t a lot of incentive to move on to other things. We were looking to provide that and Coach Miles and his representatives also were ready. It was a mutually agreed upon goal and a very positive process from beginning to end.” — LSU AD Joe Alleva, per Bleacher Report

Les Miles’ buyout officially ends his tenure, and there are a five schools who should be calling the national championship winning coach as he weighs the pros and cons of potentially taking a new head coaching job.

PRO: Southern California adds years to your life (see: Pete Carroll). The area is perfect for a seasoned head coach looking for one final act in his play. Miles already has the chops as an actor, so why not head to Los Angeles? Plus, Miles may not have a more high-profile school to land a full-time job at. After two respectable seasons with Sam Darnold at quarterback, head coach Clay Helton has watched his team stumble to a 5-5 record this year. If things don’t look up, Helton might get canned, and Miles would look great in cardinal and gold.

Why Clay Helton should get fired:

1) He picked Browne over Darnold in 2016 and ended our playoff hopes in the process.

3) This atrocity of a season.#CALvsUSC #FightOn

CONS: The Pac-12 is not the Miles style. Smash-mouth LSU football teams that beat each other up and down the field are so different from this conference. It would be a complete 180-degree flip for an offensive line coach by trade. That entails a complete roster overhaul, but Miles’ skill as an elite recruiter would help curb that problem calling first dibs on the West Coast’s top talent. That takes time, and how much is Miles willing to give up?

PROS: There would be zero expectations during a rebuild in Kansas. The team is already about as bad as they could be, and after firing head coach David Beaty, they’re looking to right the ship. Miles would be given a window of at least two years to rebuild this program, and with a wild Big 12 conference where defense is basically irrelevant, Miles could build the conference’s first, legit defensive team and contend like an SEC school.

CONS: Kansas is a basketball school. The Jayhawks home stadium is regularly empty, and the enthusiasm surrounding Jayhawks football is in the basement. Miles can recruit elite players, but who would want to play at a school that doesn’t seem to care about football? It’s a big “what-if…?” decision to make, and it might keep Kansas off the table completely.

PROS: Could you imagine a Les Miles revenge tour in the SEC? Much like Jimbo Fisher coming to the Texas A&M Aggies, there would be a huge power shift to help balance the scales in the conference. The Commodores haven’t had a winning record since James Franklin left for Penn State, so maybe it’s time to move on from head coach Derek Mason and “anchor down” with some heavy artillery.

CONS: Competing in the SEC again would make for a great story line and playing in the SEC East is a best-case scenario for rebooting a program, but this would a tall task. Miles’ allure as a winner would have to compete with brands like Georgia, Florida and Tennessee, and it’s hard to foresee Miles willing Vandy to the top.

PROS: Much like the Kansas job, there’s no way Miles would be expected to win right away. With the school in need of a major image overhaul, adding a stable figurehead like Les Miles into the mix might be what they need. Plus, Miles was born in Elyria, Ohio, played on the offensive line for the Michigan Wolverines, and knows how to win Big Ten football games in the trenches.

CONS: Maryland might have dug their own grave following the D.J. Durkin firing debacle, and this entire situation seems like complete dumpster fire from the outside. The school is doing whatever they can to fix this, but they might need to slide out of view and let another coach reset the culture before they can even consider getting big-time recruits to commit to the program.

PROS: The ACC Coastal division has big-name football programs like Virginia Tech and Miami present, so Miles would have a TON of exposure. Plus, while this is a basketball school first, the Carolina blue and white would be a huge draw for kids wanting to be affiliate with the Tar Heels and Michael Jordan brands.

CONS: While a roster overhaul would be needed, this team has a lot of holes this season. Enthusiasm for the football program is low, so starting up the engine would take some time. But playing in a one-team dominant ACC, close to the players he recruited at LSU, and using the UNC brand to his benefit? This new job might be the most appetizing if head coach Larry Fedora gets canned.

READ MORE: If Pac-12 Coaches Had an All-Out Brawl, Mike Leach Knows Who Would Win