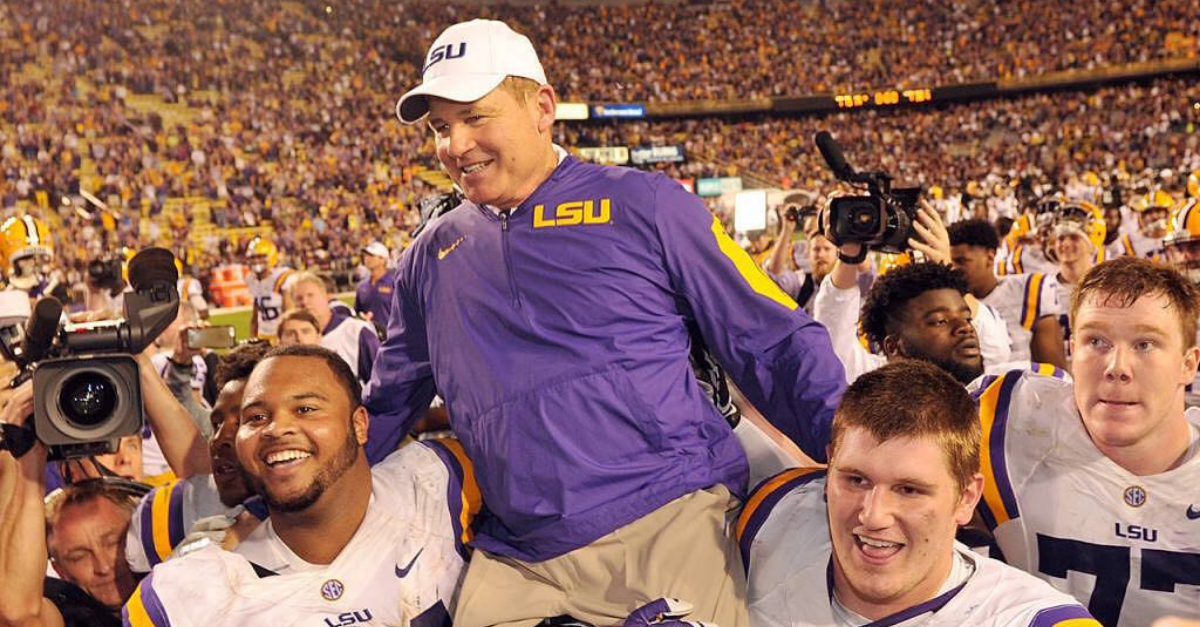 Les Miles hasn’t patrolled a sideline since Auburn’s Daniel Carlson kicked six field goals to beat the LSU Tigers, 18-13, back in 2016. Miles was fired after a 2-2 start to that season, and Ed Orgeron‘s reign as the head coach in Baton Rouge began.

Miles is a championship-caliber head coach, and one of the best recruiters in the country, but he’s been dormant ever since LSU canned him two years ago. For the second year in a row, and with coaching vacancies starting to open up as teams flame out in 2018, Miles is gaining momentum for a job in the Big 12, but it’s not exactly the most exciting place in college football to go work.

According to Bruce Feldman of FOX Sports and The Athletic, Miles is being considered as a serious contender for the opening with the Kansas Jayhawks football program after the university fired head coach David Beaty following a 6-39 record in just shy of four seasons with the program.

Am told by a source that there's a lot of momentum for Les Miles at #KU as the new head coach, and that he's emerged as a frontrunner. https://t.co/XEQhhT036r

Beaty was in the midst of, shockingly, the best season of his tenure in 2018, including notching the program’s first road win since the iPhone 3 earlier this season. However, a 3-6 record wasn’t going to save Beaty, and the program let him go.

Swinging from Beaty to Miles would be a massive shift in the program. Kansas is primarily a basketball school whose football program hasn’t had a winning season since Mark Mangino’s team went 8-5 and won the Insight Bowl in 2008. The Jayhawks haven’t won more than three games since 2009, so you can guarantee fans in Lawrence, Kansas are salivating at the chance to bring in a national title winning coach.

As the LSU head coach from 2005-2016, Les Miles’ teams went 114-34 in Baton Rouge. They won the SEC twice and brought home the 2007 BCS National Championship. Known for recruiting and developing NFL-caliber talent, Miles has a massive reputation that he’d be bringing to a Kansas program that is built to lose right now in the high-flying Big 12.

Miles’ smash-mouth reputation doesn’t fit exactly in a conference with Oklahoma, Texas and West Virginia, but maybe a big name is exactly what Kansas needs to pull themselves out of the basement?

If Miles decides to turn down the job as Kansas head coach, at least he’ll get to look forward to the release of his acting debut in “The Last Whistle” at the Lone Star Film Festival this week.

It would be a massive project for Miles if he takes the job in Kansas, but he’s not the only head coaching candidate of note. NC State’s Dave Doeren, Troy’s Neal Brown, and Appalachian State’s Scott Satterfield all have been linked to the Kansas job.

It wouldn’t be a revenge tour in the SEC for Les Miles, but watching him rebuild KU football would certainly be the biggest story of 2019 if he ends up getting this ugly job.

READ MORE: Cast Your Vote in the 2018 College Football Elections