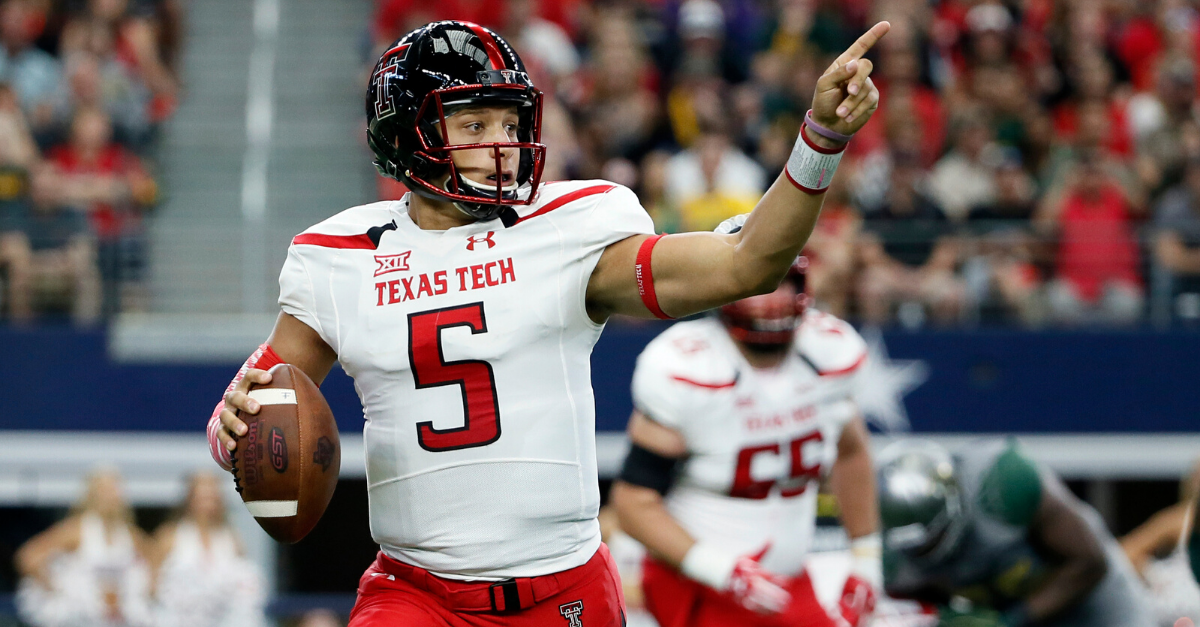 The NCAA and the decision to let college athletes cash in on player likenesses and images is one of the most-talked about topics in sports right now. From Tim Tebow to LeBron James, everyone has an opinion.

On October 29, the organization announced what first seemed to be groundbreaking news in that the board of governors had “voted unanimously to permit students participating in athletics the opportunity to benefit from the use of their name, image and likeness in a manner consistent with the collegiate model.”

This was a response to California’s passing of the Fair Pay to Play Act, which would allow student-athletes to profit off their name, image and likeness and do things like sign endorsement deals. But, as you can read further into it here, the NCAA didn’t really do or say anything in that statement. At least not yet.

Still, everyone on social media freaked out.

Why? A very large slice of the college football fan population cares about one thing stemming from these talks: bringing back the legendary NCAA Football video game.

The now-considered-ancient college football game was developed by EA Sports and first began as Bill Walsh College Football in 1993. It wasn’t until 1998 that Electronic Arts bought the licensing rights to use the four letters in what would become NCAA Football 98.

The last installment of the video game series was NCAA Football 14, which featured stars like Texas A&M’s Johnny Manziel, Clemson’s Sammy Watkins and South Carolina’s Jadeveon Clowney. Unless you played it, I can’t even begin to describe what a blast the game was.

While it may be a while before it returns — it may never come back at all — I thought it’d be fun to look back at the best and most explosive players we would’ve dreamed about using since the game’s last release in 2013.

Note: I left off guys like Marcus Mariota and Jameis Winston because they were technically in the last version of the game. I did, however, include players who were freshmen in 2013 like Jalen Ramsey and Ezekiel Elliott, because most of them weren’t superstars yet at their universities. Also, the game only featured Division-I FBS teams, so no Carson Wentz.

Amazingly enough, you can still buy the game on Amazon.

Feel free to let me know who I left off the list.

The last time Ezekiel Elliott participated in a playoff game at AT&T stadium, he went for 246 yds and 4 TDs…for the Ohio State Buckeyes. pic.twitter.com/LtMwks9vhC

Ezekiel Elliott was a rare specimen coming out of Ohio State. He racked up more than 2,000 yards from scrimmage in his final two years with the Buckeyes before the Dallas Cowboys took him fourth overall in the 2016 NFL Draft.

He’s probably the most complete running back on this list. He’s got the speed, pass-catching abilities and blocking that every coach (read: video gamer) is looking for. He also has some size to him, which means you can truck stick a few defensive backs with him.

We’re all looking for that shutdown corner that will blanket an opposing team’s best wide receiver. Who you gonna call? Jalen Ramsey.

Ramsey had elite speed and a 6-foot-1 frame coming out of Florida State University, where he amassed 22 passes defended. Plus, he’s the best smack talker in the game. There’s no doubt he would’ve been a blast returning interceptions to the house against your buddy crying on the couch next to you.

Not only was Derrick Henry the best high school running back ever, he is the Alabama Crimson Tide’s all-time leader in rushing yards and rushing touchdowns.

The reason for that? No one could tackle the 6-foot-3, 240-pound bulldozer. Alabama would have already been an unfair team to use in NCAA Football, and the Heisman Trophy winner would’ve taken them to whole ‘nother level.

THIS JUST IN: Stanford RB Christian McCaffrey declares for the 2017 NFL Draft. pic.twitter.com/Neja9RQV0d

Call him what you want: Run DMC, Dairy Sanders. Christian McCaffrey probably should’ve won the 2015 Heisman over Henry. I mean, the guy put up more than 2,600 yards from scrimmage.

Like Elliott, McCaffrey is a pretty complete back albeit probably quicker and more elusive. Slicing up defenses in the college football video game would’ve been a cakewalk with the former Stanford running back.

The Final Act : The Deshaun Watson led Tigers would face the Alabama Crimson Tide in the National Championship Game once again in 2017.

Watson would define his legacy with this performance!

His stat line from that game

Watson was named college football’s player of the decade and for good reason. One can only salivate over what his speed rating and throw power would’ve been, but 95 sounds about right to me.

It’s almost laughable that he never won the Heisman, but I guess taking down Nick Saban and the Crimson Tide in the 2016 College Football Playoff National Championship Game was a nice consolation prize. Watson would’ve been a cheat code, plus he had receivers like Mike Williams to throw to. Sheesh.

Leonard Fournette is the first LSU RB to be taken in the top 10 overall within the Common Draft Era pic.twitter.com/WWjUDMpOAw

Leonard Fournette had one of the most ferocious, soul-snatching truck stick hits I’ve ever seen back when he played for the LSU Tigers. He was a man among boys, which is why he rushed for more than 1,900 yards against SEC defenses as a sophomore in 2015.

Running this dude up the middle at linebackers or whoever wanted to step to the plate against him in the video game franchise would’ve been entertaining as hell.

Thomas wasn’t really all that hyped coming out of Ohio State. He posted back-to-back season of sub-800 receiving yard seasons along with nine touchdowns each.

However, seeing that he’s one of the best receivers in the NFL now for the New Orleans Saints, I like my chances using a 6-foot-3 wide receiver catching passes from Cardale Jones or J.T. Barrett. Plus, I had to have a receiver on here somewhere.

I’m not gonna lie, I would’ve used high school version of Myles Garrett in an NCAA football game. That’s how unusually big and scary he was.

Garrett didn’t just look like the Hulk at Texas A&M University, he played like him too. After posting 32.5 sacks for the Aggies, the Cleveland Browns took him first overall in 2017. Throw him outside against any college offensive tackle, and he’s probably breathing down the quarterback’s neck nine times out of 10.

One of my favorite prospects in this entire draft class is Florida State safety Derwin James. Here he is talking about his draft journey. pic.twitter.com/SnvWHdI146

Some of us have favorite positions we like to user control in Madden or NCAA Football. Mine was always the safety position.

James was the definition of a ball hawk while at Florida State, and his 6-foot-3 height mean he could climb the ladder on 50-50 balls better than most receivers. Pair him with that 2015 FSU offense, and the Seminoles were unstoppable force in any video game.

If Mahomes was this good in the NFL, imagine how good he would’ve been in college and in a video game, where it’s way easier to exploit your opponent’s weaknesses.

Mahomes threw for more than 11,000 yards for the Texas Tech Raiders, a good chunk of which came in a legendary game against a Baker Mayfield-led Oklahoma Sooners team. The only problem using a freakazoid like Mahomes is having to play defense with that sorry team.

Saquon Barkley, AKA SaQuads, has some of the tree-trunkiest legs the college football world has ever seen. The powerful running back plowed through defenders at will at Penn State, totaling more than 5,000 yards from scrimmage during his three years with the Nittany Lions.

For some reason, Madden once rated his strength a measly 81 (lol). Barkely was a modern day He-Man when he carried the ball, and that most definitely would’ve showed in a video game.

Here it is guys, with the 1st overall pick in the 2019 NFL Draft, the #Cardinals are selecting Oklahoma QB Kyler Murray. pic.twitter.com/hTCNfvBcLP

Murray received a ton of comparisons to Bo Jackson because he could’ve chosen professional baseball before ultimately landing a huge check as the 2019 No. 1 overall selection. Sadly, the college sports star wouldn’t have been as dominant as Jackson was in Tecmo Bowl.

Murray would’ve been crazy fun to use, however. His quickness, speed, throwing power and pinpoint accuracy (thank you, baseball) made him a dream to watch. Now just imagine using him on the sticks.

Jackson is basically Madden ’04 Mike Vick in Madden ’20, so just imagine tearing your opponent apart in NCAA. Jackson is one of the fastest signal callers to enter the NFL since Vick, once running a blazing 4.34 40-yard dash at Louisville.

Juking defenders and collecting their ankles would’ve been all too easy. Unlike what some analysts thought, Jackson could sling the ball as well. That’s why the Baltimore Ravens selected him and why everyone playing NCAA Football would’ve picked the Cardinals.