The most talented college football players don't always land in the NFL. Phil Robertson is the perfect example of that.

Not only did the "Duck Dynasty" star start at quarterback for Louisiana Tech in the 1960s, he was actually ahead of Pro Football Hall of Fame quarterback Terry Bradshaw on the depth chart before he eventually chose ducks over football.

Bradshaw, of course, is known as one of the best quarterbacks in NFL history for becoming the first overall pick in the 1970 NFL Draft and leading the Pittsburgh Steelers to four Super Bowl wins. However, the Hall of Famer wasn't the immediate star in college at Louisiana Tech University.

For two seasons, it was the duck master, Phil Robertson, who took the snaps as the starting QB for the for the Louisiana Tech Bulldogs football team.

Duck Dynasty star Phil Robertson was born in Vivian, Louisiana. He attended Louisiana Tech University (nope, not LSU) for three seasons in the late 1960s and started for two of those at quarterback before deciding his passion was in ducks, hunting and everything outdoors, not in football.

Although his statistics didn't show how talented he was, he is remembered for having just as good of an arm as Bradshaw at LA Tech, if not better in some ways. He finished his NCAA career with 2,237 passing yards, 12 touchdowns and 34 interceptions.

Robertson Played Ahead of Terry Bradshaw

However, Robertson's biggest flaw as a student-athlete was his lack of focus and dedication to the sport and the classroom. He showed up to classes and practice covered in blood, duck feathers and squirrel tails because his attention was always on his love of hunting, fishing and the outdoors, according to ESPN.

Phil Robertson from Duck Dynasty, when he was QB for the Louisiana Tech Rajun Cajuns. #DuckDynasty #football pic.twitter.com/8FeHO3r41a

Phil Robertson back in the day with his @LATech football teammates! Including Terry Bradshaw #DuckDynasty #NCAA pic.twitter.com/avWJSSJ0FI

There is not doubt he made the right choice, though. Instead of going pro and possibly making a solid living, he started a duck-call making business, the Duck Commander company, and has since become famous for the show "Duck Dynasty" and made millions of dollars.

Robertson's net worth is estimated at $10 million, which is absolutely amazing for someone who built a duck-call business from the ground up. That is also impressive compared to that of Bradshaw, who has an approximate net worth of $45 million.

To football fans, it may seem crazy to give up the chance at the NFL, but it is also crazy to do something you aren't passionate about. Robertson's NFL career would not have lasted very long if he was staring up into the sky watching ducks fly by like he apparently did while in college. 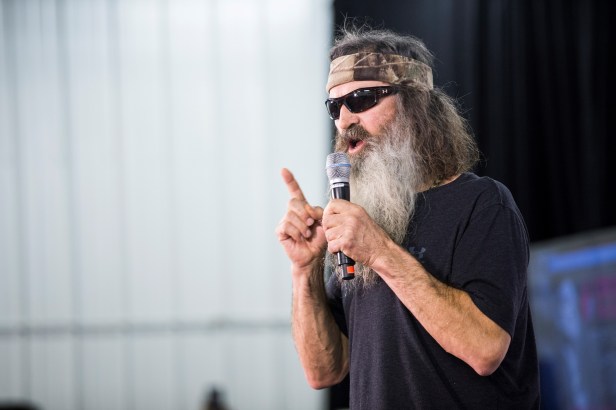 His pure arm talent put him in a position to be the starting quarterback for the Bulldogs, but that could only take him so far if he would rather be out duck hunting. Robertson's biggest break likely came when he got a reality TV show about his company, lifestyle and family.

He also set his family and "Duck Dynasty" cast up pretty well with his son Willie Robertson, as well as his brother Si Robertson and wife Miss Kay, gaining tons of fame and popularity from their show.

The entire Robertson family is "happy, happy, happy," after the money they have each made in the years since their show debuted.

This article was originally published August 15, 2019.

MORE: Did You Know 'Apollo Creed' Actually Played in the NFL?