I felt a sense of relief when Nebraska kicker Timmy Bleekrode missed the 52-yard field goal to send the Georgia Southern game to overtime. As if there was any doubt about Scott Frost's job status, it was put to rest when the ball sailed left.

Much to the relief of Husker fans, Nebraska athletic director Trev Alberts showed mercy when he fired Frost on Sunday morning, ending the Nebraska head coach's tenure after going 16-31 in four-plus seasons.

Scott Frost's time at Nebraska is defined by "so close" losses it was poetic his final moment as the Cornhuskers head coach was an unsuccessful special teams play. Frankly, I had no confidence Bleekrode would make it. Not because of his kicking abilities, but because this is a Scott Frost coached team. I had 30 reasons to believe coming through in a close game was impossible.

I believe in making your own luck when it comes to sports. There's a reason Nick Saban's Alabama teams catch breaks. They're disciplined. They're well coached. They play hard. Saban downplays everything and defends his players when he speaks publicly. Scott Frost's Nebraska teams were the antithesis. They were sloppy. Players weren't put in positions to succeed. Frost threw subtle shots at his assistant coaches and used his quarterback's injury -- which his quarterback wanted to keep secret -- as an excuse. It's not surprising his teams couldn't break through.

And after his disastrous tenure, I'm now a believer in omens. Tell any Nebraska fan how the Frost era would go before the 2018 opener against Akron was canceled due to thunderstorms, and they would laugh in your face. We thought we had hit lows with Mike Riley, and we finally had our guy. Little did we know it was about to get so much worse. So much worse. Misery loves company, but Nebraska must have forgotten to shower because rock bottom is a lonely place. And rock bottom only kept sinking, reaching unfathomable depths.

Yet, much to the demise of our sanity, Nebraska fans continue to invest time and money. We still show up even though the product on the field gave us thousands of reasons not to. So, Trev Alberts repaid us when he let Frost go. He was willing to give Frost his full $15 million buyout even though that number would've been reduced to $7.5 million on October 1st. He felt like the players deserved a fresh start, too.

"At this point I just felt like ... we owed it to the players to give them a different voice, a slightly different vision, some confidence," Alberts said in a press conference Sunday. "We needed to inject something into this team to give them confidence and help them compete."

It was also a smart move because the entire storyline going into the Oklahoma game this weekend would've been Scott Frost being a dead man walking. Sure, Frost will be talked about a lot, but the focus is on the game as much as it can be. Great decision considering the national audience of Fox's "Big Noon Kickoff" will be tuned in.

The other main takeaway I gathered from Alberts' press conference is Nebraska shedding its expectations of the past.

I'm more and more impressed with Alberts each time I hear him speak.

In the meantime, interim head coach Mickey Joseph will lead the team while Alberts starts his search. Here are the names I've heard thrown around.

Who Will Replace Scott Frost at Nebraska? 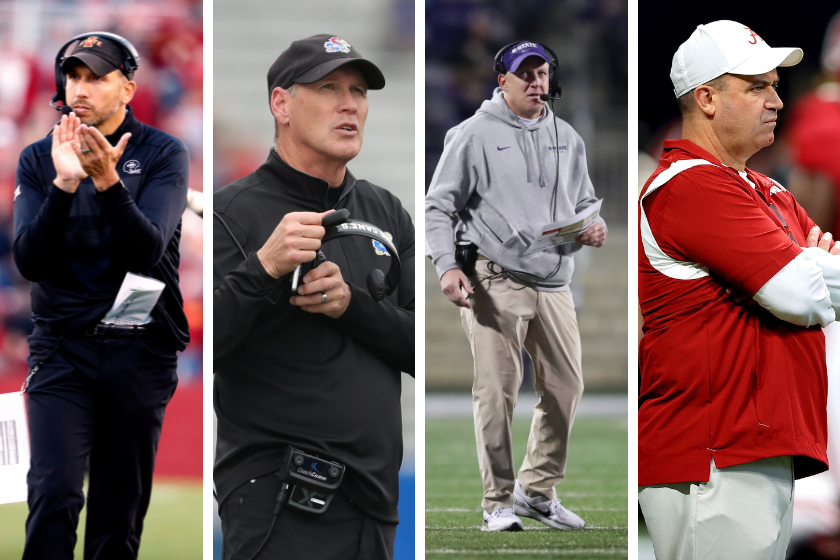 Two quick notes before I sound off. Holy cow is Nebraska lucky to be in the Big Ten. The Big Ten and SEC have clearly separated themselves as the conferences to be in, and the Big Ten's new $7 billion media deal with Fox, CBS and NBC gives Nebraska the money to meet market demand. We'd be dead in the water if we were still in the Big 12. Also, expectations could not be lower. Fans want a respectable team. That's it.

Matt Campbell, Iowa State: Campbell is reportedly Nebraska's top target because of his program building ability. He's transformed Iowa State from a bottom feeder to a formidable Big 12 program and has five winning seasons in six years. Campbell also just beat Iowa, something Nebraska hasn't done since 2014, and had a top-10 finish in 2020. His name has been rumored for other big time jobs around college football and the NFL, but he's stayed put. Maybe Nebraska offering to double his $4 million salary would be enough to pull him from Ames.

Lance Leipold, Kansas: Leipold has had success everywhere he's been a head coach. He won six Division III National Championships at Wisconsin-Whitewater and turned Buffalo into a perennial bowl game participant. At 58, he took on his most daunting task at Kansas. The Jayhawks beat Texas in Austin last year and are off to a 2-0 start in 2022, which includes a win over West Virginia on the road. Leipold also has Nebraska ties. He was an assistant under Frank Solich and coached at Nebraska-Omaha for a decade.

Chris Kleiman, Kansas State: Kleiman has two eight win seasons under his belt since taking over K-State in 2019. This year, the Wildcats look ready to compete for the Big 12 title with stud running back Deuce Vaughn and ex-Nebraska QB Adrian Martinez. He also won four FCS national championships at North Dakota State. Again, another program builder.

Bill O'Brien, Alabama offensive coordinator: Following the fallout of the Jerry Sandusky scandal at Penn State, Bill O'Brien led the Nittany Lions to a 15-9 record in his two seasons in State College. He then coached the Houston Texans for six-plus years, where he accumulated a 52-48 record. O'Brien led Houston to four playoff appearances, but his decisions as general manager are what ultimately cost him his job. His experience coaching in the Big Ten makes him a suitable candidate. Plus, coaching under Nick Saban for a few years never hurts.

Those are the main four, but here are others in the mix.

I want to touch on Joseph real quick. My read is Alberts and fans alike want to cleanse themselves of any trace of Frost, but he has nine games to prove himself. Clemson was in a similar position with Dabo Swinney in 2009, and they've done alright. That being said, whoever gets the job will be given everything he needs to succeed.