We've all been excited to get the 2022 NFL season underway. Hopes are high, the bars are full, and the start of NFL-related elation and heartbreak is upon us.

And, so it seems, a serious case of the yips have hit the feet on which we rely only in some of the biggest moments.

Seriously. Week 1 was a horrible time to be an NFL kicker. 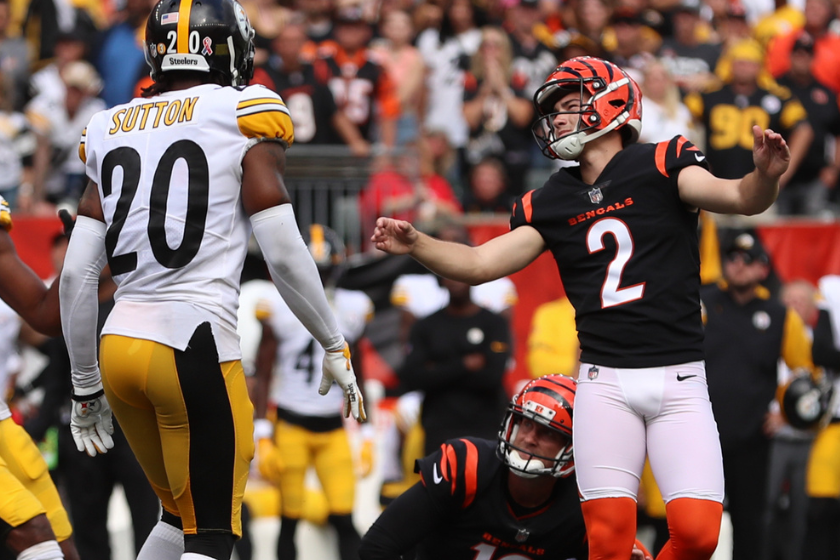 RELATED: NFL Overtime Rules: Explaining How It Works (And Why They're Dumb)

Evan McPherson has rarely faltered for the Cincinnati Bengals. Getting to kick in the Super Bowl is no small feat, but the fact that he managed to do so as a rookie is incredible. The kid had ice in his veins. He didn't ever believe he'd miss, and was so vocal about it that it became part of the storyline throughout the playoffs.

Fast forward to today, and our baby boy had a bit of a blip. Frankly, the end of this game for the Bengals went from bad to worse. Once Ja'Marr Chase's catch at the goal line was called out at the half yard mark, the big comeback fell apart. But then the Steelers decided they didn't want to win the game and gave Cincy the ball with just under a minute and a half left. Burrow marched down the field, the Bengals scored a touchdown, and then two seconds remained for McPherson to boot the extra point for the win. Until the unexpected happened.

BLOCKED. WHAT A GAME.@minkfitz_21 said NOPE!

The kick was low and blocked, and both teams went off into overtime. Ultimately the Steelers won, and McPherson wasn't able to play hero. He ended up 2-for-3 on the day kicking field goals and his only extra point was blocked. It wasn't his worst performance, but are we now seeing a chink in the armor? Because that game winner was just a bit outside.

NO GOOD. This game is bananas.

Honestly, the salt in the wound may just be the fact that Pittsburgh won the game on a Chris Boswell field goal, one he made after hitting the uprights earlier in the overtime period.

Wild stuff, but it didn't stop there. 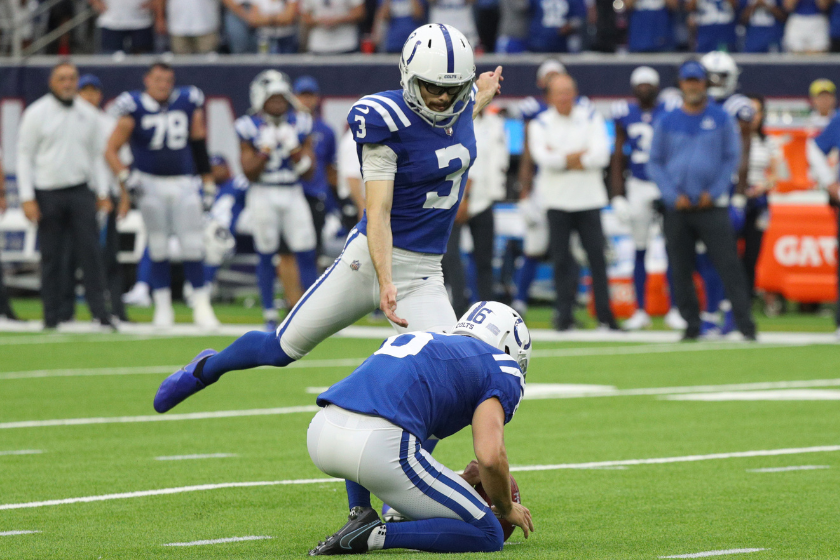 Rodrigo Blankenship has maybe the coolest name of any kicker in the National Football League. And, overall, he had a decent game against the Houston Texans. The problem though is that this is a very "what have you done for me lately" league.

At one point, the Texans hopped out to a 20-3 lead before the Colts were able to storm back into the game and force overtime. Indy marched down the field in OT, and with two minutes remaining found themselves setting up Blankenship for a 42-yard game winning field goal. To this point he was two-for-two on both extra points and field goals, including a 45-yarder.

It wasn't meant to be this time, though, as Blankenship missed wide right and reduced the Colts comeback to becoming the first tie of this young season.

The New York Jets are Rubbing Off on Greg Zuerlein 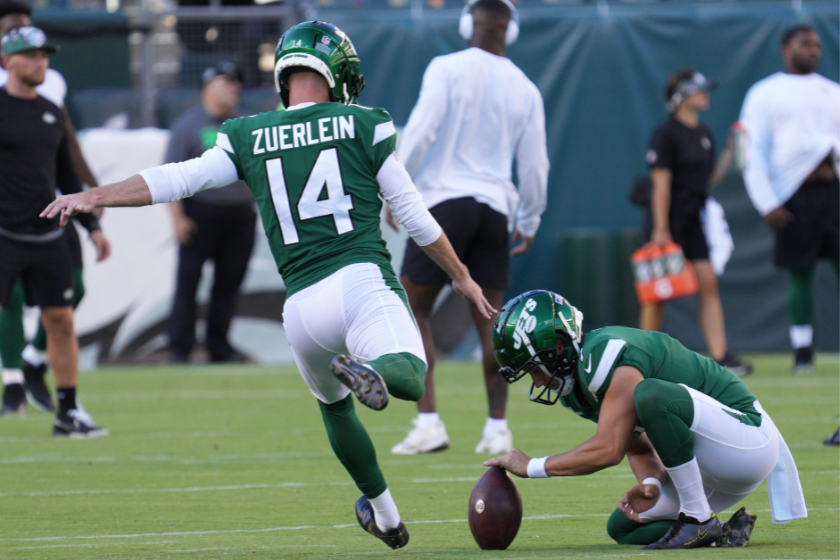 MORE: The NFL's Overtime Rule Change Took Too Long, But Why?

Greg Zuerlein was the picture of consistency when he played for the Los Angeles Rams. For years, when the Rams crossed the 50-yard line, it was almost a guarantee they'd end up with at least three points. But, as week one has proved, even the mighty can fall.

The New York Jets have been, at best, hot garbage since Mark Sanchez left the team. Okay, honestly, that may be the funniest sentence I've ever written, and yet it's actually true. The Jets are bad. Bringing in a veteran kicker like Zuerlein was supposed to sure up what really should be the automatic part of the game. New York wasn't terrible today, but our boy Greg was not up to par with the rest of his team.

Zuerlein was able to muster 3 points in a game the Ravens were always likely to win. But he missed his only extra point opportunity and will now go into week two with 50% FGM. Not ideal, and not a good sign if the Jets want to fly up out of the depths of the AFC East. 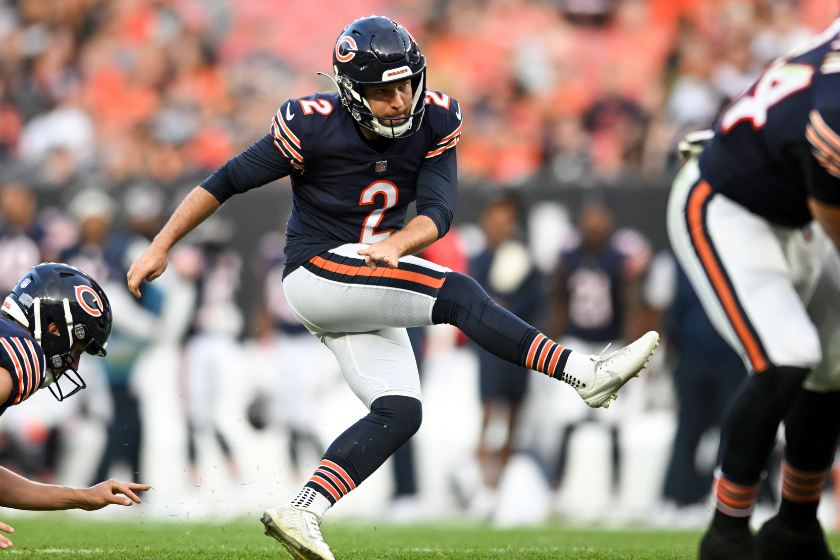 First and foremost, we need to give credit to the Chicago Bears. They played well in a rough situation against the NFC Runners Up from last season. Most experts likely had the 49ers taking this game. I know I did. But the Bears showed up. And, I suppose, so did the weather. The entire game was going to be played under virtual monsoon conditions, so it was never likely this game would be terribly high scoring. It would be fought in the muddy trenches of Soldier Field.

Chicago switched out their Kentucky Blue for some Bermuda-style grass leading into their matchup against the Niners. The big issue with that however, is that Bermuda-style retains water. And with the torrential conditions, the field resembled its own version of the Great Lakes. So, you can't really blame Cairo Santos for having a bad day at the office.

It's difficult to kick in the rain. The ball is heavy, it's going to be covered in mud, and it basically is like kicking a large brick. Kicking in the snow seems difficult, but if you're able to clear that space you at least have a hard surface to hold the ball on. In the rain you're basically running up and kicking on a sponge. And it showed for Santos. The poor guy only went 1-for-3 on extra points.

Lucky for Chicago, it didn't end up being problematic. But if last years 49ers had shown up, at best those misses may have cost them the game if they went blow for blow. 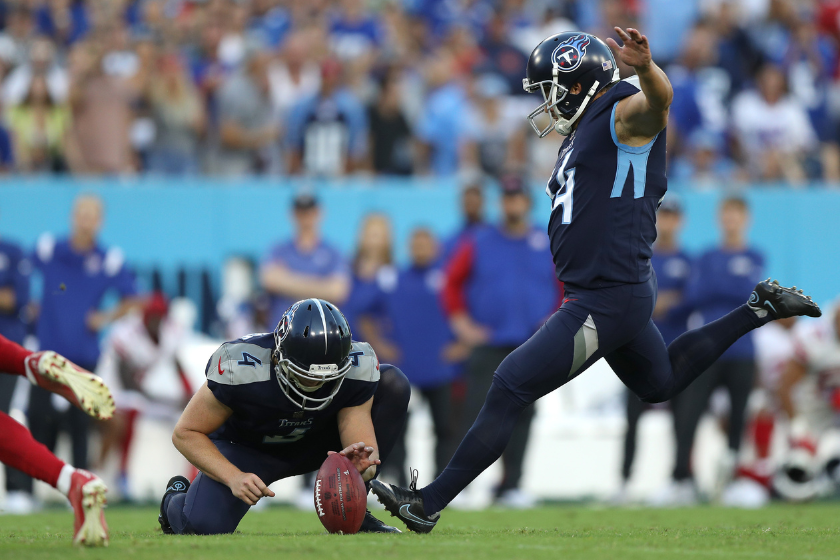 The Titans have been a pretty good football team for the last few years. Meanwhile, the Giants have not been. Reason tells us that Tennessee should have mopped the floor with New York in Nashville, but they kept the game close. At the very least, they were able to get into field goal range with just four seconds left in regulation.

Randy Bullock stepped up to the hash, went through his routine, and readied himself to close the game by splitting the uprights. He had already smashed four kicks through to that point - two extra points and two field goals. But, somehow, this moment loomed too large. As he wound up, Bullock's follow through shot wide left, handing a one point victory a Giants team who look as though they may have turned a corner.

MORE: No One Will Outkick Justin Tucker for the Longest Field Goal in NFL History