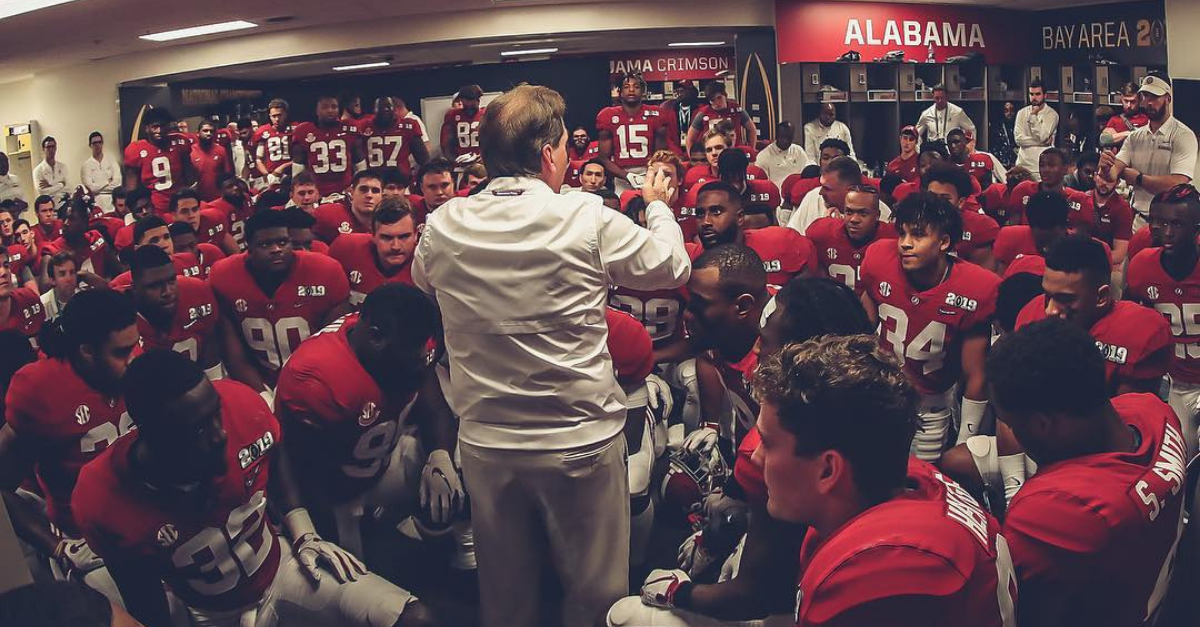 When the Clemson Tigers embarrassed the mighty Alabama Crimson Tide in the 2019 College Football Playoff National Championship game, 44-16, the fallout was hardly more than a blip on the radar. When a program makes the postseason tournament five years in a row and has lost a total of six games in that span, it seems like they received a free pass for getting rolled in their biggest game.

As another college football season ends, so begins the ever-present issue of head coach Nick Saban‘s Alabama football program. Every year, this coaching staff turns over like a Waffle House pancake, and with yet another high-profile assistant coach on the move, it’s time that recruits, parents and fans around Alabama start to realize that this unsettling trend just isn’t right.

From the time kids begin to emerge in high school football, coaches come knocking at their front doors hoping to lure these talents to major college programs. With that comes promises of an education in football, school and life, as well as the pledge to keep these kids protected as long as they’re part of that university’s family.

It’s hard to honor any of those pledges when the faces making them change every single year.

The latest name on that list is Alabama’s co-offensive coordinator and wide receivers coach Josh Gattis, who after just one season in Tuscaloosa, is not expected to return next season. The 2014 Big Ten Recruiter of the Year was a former assistant working for James Franklin with the Penn State Nittany Lions and Vanderbilt Commodores, and he’s on the move again. Despite reports that he’d join former Alabama OC Mike Locksley, who was hired as head coach of the Maryland Terrapins for next season, Gattis has reportedly been hired as the next offensive coordinator of the Michigan Wolverines.

.@CoachCollins announced that @CoachBrentKey will be part of the coaching staff. More details soon. 🐝🏈👊#TogetherWeSwarm

It’s time this ongoing issue isn’t glazed over with the “well, that’s just Alabama for you” argument. For as great of a recruiting destination as Nick Saban has built in Tuscaloosa, more and more recruits are going to start realizing that if they want to learn the game at its highest level, while still being a part of something greater than themselves, then the University of Alabama might not be the place for them.

Dabo Swinney is proving that fact one championship at a time.

The biggest example of this is freshman wide receiver Justyn Ross, who torched both Notre Dame’s and Alabama’s secondaries to the tune of 12 catches for 301 yards and three touchdowns in the Sugar Bowl and College Football Playoff title game. During the recruiting process, the five-star Phenix City (AL) native said he chose Clemson over Alabama because “the different type of culture that they have [at Clemson], as well as being ‘more a family and more coaching stability.'”

In that same span, here is the list of Alabama coordinators since 2011:

Even the unsung heroes at Alabama, like Josh Gattis, up and leave the program after writing “Worked for Nick Saban” on their resumes. For these guys, more power to them in searching for a better job. For the kids they’re promising to lead and teach, however, it might as well be a slap in the face.

If more elite recruits like Justyn Ross start realizing the ongoing problem at Alabama, we might watch the unrivaled talent that has descended on Tuscaloosa slowly diminish with time. It’s unfair in every way to these young men to deal with this kind of turnover. Going somewhere with stability, like Clemson, sounds a lot more appealing than the question marks that cycle in and out of the Crimson Tide facility.