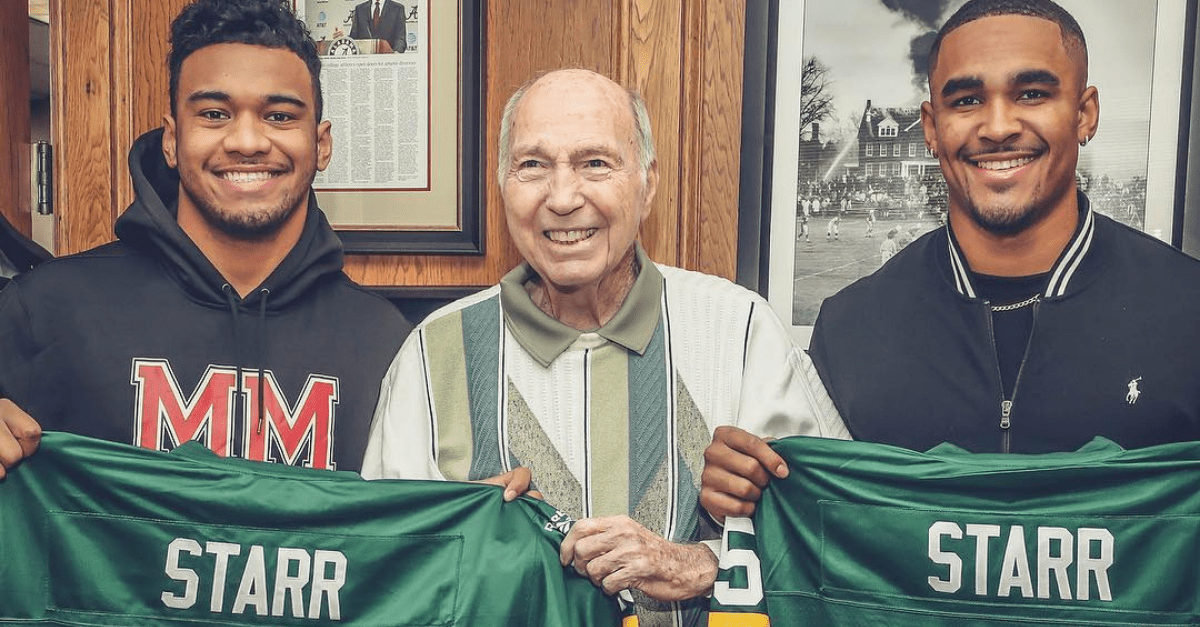 The 2018 college football season was filled with iconic punt returns, a seven-overtime thriller, and even an interesting date proposal. While the present dominated the headlines, it’s the past that is being honored as the Alabama Crimson Tide prepare for the Oklahoma Sooners and the Orange Bowl.

At 84 years young, Bart Starr met two Alabama legends in the making leading up to another championship run, something the Green Bay Packers and Crimson Tide legend knows a thing or two about.

Starr personalized jerseys for both Tagovailoa and Hurts and delivered some words of encouragement as he’s remained a faithful Alabama football fan over the years, which all started during his own days walking through Tuscaloosa, Alabama.

Born on January 9, 1934 in Montgomery, Alabama, Bryan Bartlett Starr started playing football for Sidney Lanier High School, but he decided to briefly quit during his sophomore season. It’s a good thing he chose to return, because Starr would lead his high school team to an undefeated season as a junior and earned All-State and All-American honors as a senior.

With scholarship offers from across the country, the star football player chose to play for the Alabama Crimson Tide.

Starr attended the University of Alabama from 1952-55. During his time in college football as a quarterback, safety and punter, Starr suffered severe beatings resulting in a back injury when members of the A-Club, a group exclusive to Crimson Tide varsity letterman, paddled him so badly he had to be hospitalized, according to his wife Cherry Starr. That incident slowed Starr’s progress during the junior season of his college career, and he was ultimately limited for the remainder of his time in Alabama.

Still, that didn’t stop Starr, a 17th-round pick in the 1956 NFL Draft, from becoming the only quarterback in NFL history to lead his team to three-consecutive NFL titles under coach Vince Lombardi. The 1966 NFL Most Valuable Player won the first two Super Bowl titles and five total NFL Championships during his 16 seasons with the Green Bay Packers. Starr was inducted into the Pro Football Hall of Fame in 1977.

This is such a cool moment to get three legendary Alabama quarterbacks in one room together, and I’m sure that once Tua Tagovailoa and Jalen Hurts take care of some unfinished business and leave Tuscaloosa, they’ll be held in just as equal esteem in the hearts of Alabama fans as Hall of Fame quarterback Bart Starr.