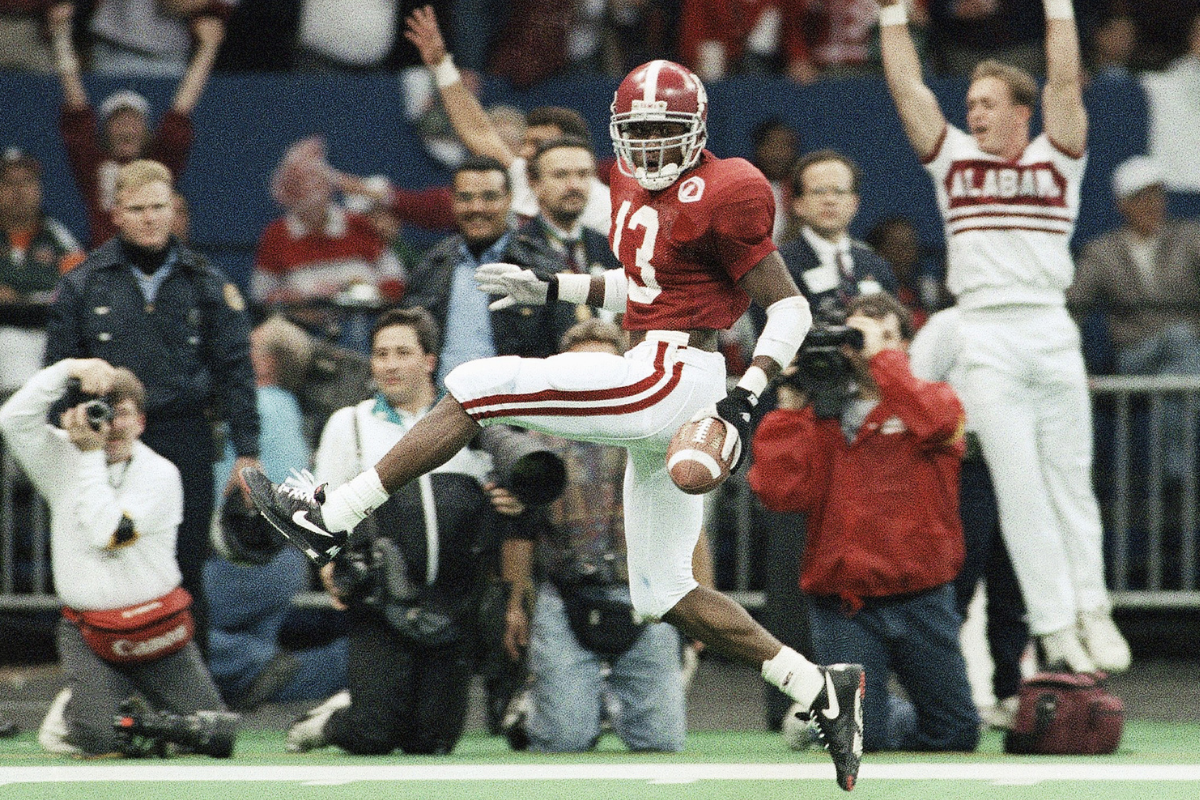 George Teague was one of the most integral members of the 1992 University of Alabama football team that won a national championship.

“The Strip” play that the defensive back made against Lamar Thomas is one of the greatest plays in college football history. Even though it didn’t count, it helped the Crimson Tide knock off the heavily-favored Miami Hurricanes in the 1993 Sugar Bowl.

We caught up with the Alabama legend to talk about “The Strip”, his recruiting process, changing positions, one of the most famous plays of his NFL career and what he’s up to now.

Teague was born in Michigan but attended Jefferson Davis High School in Montgomery, Alabama. He initially wanted to return to his birth state to play for the Michigan Wolverines, but Alabama head coach Bill Curry swayed him to the Crimson Tide.

“Most people don’t know that I really wanted to go to the University of Michigan for no real reason other than I was born there — my dad was in the military,” said Teague. “I wanted to go up there, but as my recruiting cycle started panning out, Bill Curry came to my house and I was pretty sold on the University of Alabama. I wanted to be an engineer. I thought it was going to be a great school for me academically as well, and I would be able to play a high level of football at the same time. When Coach [Curry] came in, he was the right fit as a motivator for me.”

Teague was recruited as cornerback, however, he was moved to safety for the second half of his college career.

“When I came in as a corner, I was familiar with safety because I played there in high school”, said Teague. “They said, ‘Hey, when you come to the University of Alabama, we’re going to want you to play corner.’ Did that for a couple of years, then they said ‘Let’s move you to safety for your range, your physical style of play and your ability to call plays and lead the secondary.’ I think it helped me a lot because after I was drafted by the Green Bay Packers, they wanted me to play corner. Four games into the [1991] season, they moved me to safety and I played safety for the rest of my career. It was good hindsight on the staff at the University of Alabama for seeing my skillset and being able to do both.”

The move worked out pretty well for him. In his upperclassmen seasons, Teague had 12 interceptions and finished his Alabama career with 14 total, which is tied for fifth all time in program history. Now, taking the ball away isn’t a skill every defender has, but Teague explained what made him so adept at it.

“I think the mindset of being a ball hawk comes from backyard play. Back in the day, we would always go outside and just play ball. You would try to ball hawk the football — intercept the ball,  knock the ball down — whatever it was. I grew into the ability of being able to track the ball on my own. Then, when you get to coaches who are telling you the right technique. You know, when do you turn? When do you break? When do you put your eyes to the ball? I got that real fine tuning. It helped me a ton being in multiple positions. It was different out at corner than it was at safety–being able to break at different angles and things of that nature. I give a lot of my credit to just being kids. We used to play outside all the time whether it was in the snow or the rain. Just going out and making plays. That’s how I grew up playing the game.”

Nick Saban has brought Bama to an elite level year after year, but the team was not always a complete juggernaut. The win against Miami was the first championship game won by the Crimson Tide since 1979.

Teague was introduced to the national spotlight for his performance against the Hurricanes. He returned an interception for a touchdown early in the game and then stripped Thomas, preventing him from getting to the end zone.

The sequence, aptly named “The Strip”, became one of the greatest plays in Alabama history. Even though it didn’t count, the famous hustle play almost never was because Teague had planned on taking the down off.

“Regrettably, I was actually loafing a little bit,” said Teague. “I was just trying to take a play off because it had just come off of me running an interception back. I had total confidence in my secondary. I thought, ‘Well, we’re in man-to-man coverage.’ It was called two-man, where the corners had man-to-man coverage and I was back playing deep. I thought ‘Well, I’m just going go ahead and chill this one play.’ Lo and behold, a cornerback wasn’t in the right position. I then see this ball on the ropes to Lamar [Thomas].

“If there’s any way to put expletive, expletive, expletive, expletive in there, that’s kind of what was going through my head at that moment because I knew I was in trouble, and I knew I had to try and go get him. So, I got into my best track form and the only thing I was thinking was ‘I gotta go catch this guy.’ I wasn’t going to let the team down. It was really happening in about those six, seven, eight seconds. As I was chasing him, I knew I was going to catch him the way I was running. I felt like I was going to catch him. Then, I got to him and knew I was going to try to strip the ball from him because we worked on it pretty much everyday with coach Bill Oliver, our defensive coordinator. Just so happened that once I caught up, I executed the strip, had a little luck and the ball came right back to me and I was able to be an athlete, grab the ball, and go the other way.”

Teague’s play is an all-time moment in Alabama lore. Most importantly though, he took away a big lesson.

“There’s a lot of emotions in that when I’m talking to kids about never taking a play off,” continued Teague. “This is the reason. But also, the part of the play was never quitting. It could’ve been easy for me to put my head down and be like ‘Ah, I messed up. Don’t go chase him.’ To me, there’s a big story behind that other than taking the ball and running the other direction. There are a lot of different things in that play that touched me pretty deep.”

After being crowned a Second-Team All-American in 1992, the NFL was next on Teague’s journey. He was selected in the first round of the 1993 NFL Draft by the Green Bay Packers.

George Teague was an impact player for the Packers early on. In his three-year stint in Wisconsin, he made 119 tackles and had six interceptions.

In 1996, Teague was traded to the Atlanta Falcons but was released before he could play a single snap for them.

The Dallas Cowboys scooped him up, and he would become most well-known during his NFL career while playing on Jerry Jones’ squad. He got plenty of work in the NFC playoffs and was great when he participated, especially against the Minnesota Vikings.

However, Teague is best known for his involvement in a Terrell Owens celebration. Here’s his first-hand account on what was going through his head at the time:

19 years ago today, @terrellowens stood on the Dallas star after BOTH of his TDs ⭐️

“It was a very angry moment,” said Teague. “We were losing the game very bad. It was hot out there. It was the old Texas Stadium. The turf out there was carpet, literally carpet. It would rip your skin off. It was probably 140-150 degrees out there in September. We were getting our butts handed to us, and it was kind of embarrassing.

“I just watched him. As soon as he scored, there was no hesitation and he went right out to the star. I just went after him and thought, ‘It’s about to go down now.’ Kind of got lucky on the timing I guess, and being there right when he got to the star. But, it was something I can tell you I would do it again. I think there are certain things you can’t allow happen and things people shouldn’t do even when they’re celebrating.”

I chipped in by saying Teague’s actions must’ve shown his teammates how committed he was to the team.

“Yup, I’m still waiting for them to reimburse me for the fine though,” he jokingly responded. “None of them have chipped into my GoFundMe page.”

Teague is forever a member of Cowboys’ lore because of this moment. It is still shown on ESPN countdown shows to this day.

Following the September 11 attacks, Teague proudly ran on the field with an American flag.

For a player who never made a Pro Bowl, he was involved in plenty of iconic moments. His playing career wrapped up in 2001 following stints in Green Bay, Dallas, and a one-year stay with the Miami Dolphins in 1997.

“After I got done playing there were a couple of routes I was interested in going,” Teague said. “I either wanted to go into media like a lot of athletes or into coaching. One year after, I became an athletic director and a football coach in high school. Twenty years later, I’m still an athletic director. I coached for 19 years as a high school head football coach. Now, I’m only the athletic director at John Paul II High School in Plano, Texas. I’ve enjoyed that, loved that — being around the kids. Tried to mentor as much as possible. We’ll see how it goes over the next few years as well.”

The former defensive back coached at Carrollton Christian Academy, Harvest Christian Academy and Shelton High School before he was named the coach of the Cardinals in 2017 and became athletic director in 2018.

And yes, he still makes sure to support the Crimson Tide and Cowboys with his family.

We couldn’t be too cute because of the weather outside lol! But here we are! Let’s go #Alabamafootball #RollTide #CFBPlayoff pic.twitter.com/QPXpdufGEK

The Teague’s are in the House! Let’s go @ATTStadium! Time to rock and roll!#DALvsSF pic.twitter.com/4VEPOKpJFJ

George Teague was a former Alabama star who had a great NFL career as well. The love of football has a way of following you for your entire life. It is great to see him getting the chance to help young players turn into future stars, too.

MORE: Glen Coffee Chose the Army Over NFL, But Where Is He Now?