The saying "we don't rebuild, we reload" doesn't ring more true for anyone in college football than the Alabama Crimson Tide. Head coach Nick Saban woos five-star recruit after five-star recruit, and who can blame them for going to Tuscaloosa? Saban is a pro at development and sending his players to the NFL. Playing for a national championship every year doesn't hurt, either.

We've seen plenty of talented offensive linemen, wide receivers, defensive backs and every other position on the field shine at the next level, but the running back room has churned out superstars as well. With a legacy that includes Derrick Henry, Najee Harris, Josh Jacobs, Mark Ingram, T.J. Yeldon and Brian Robinson Jr., handling the Tide's running game is no small feat.

This year, Jahmyr Gibbs is geared to continue the tradition and then some.

Jahmyr Gibbs: A Triple-Threat Running Back 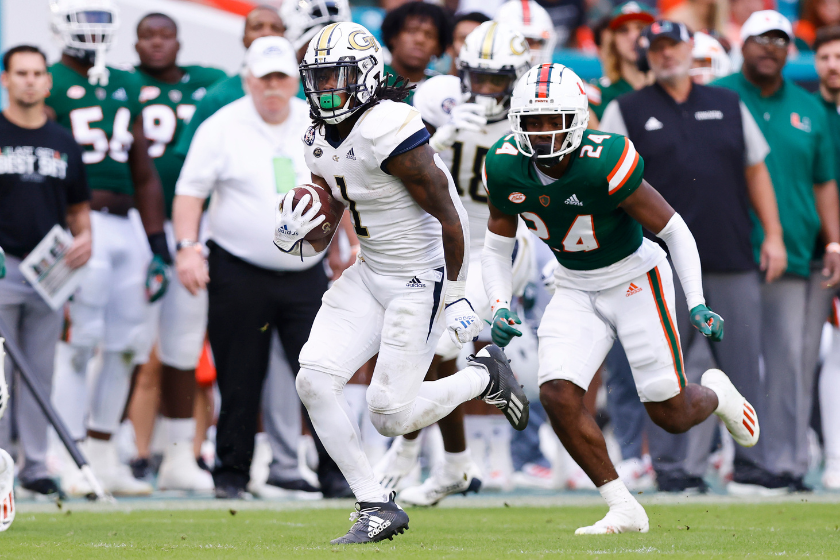 As a four-star recruit out of Dalton High School in Dalton, Georgia, Gibbs could've gone wherever he wanted. He had offers from 'Bama, Florida, Ohio State, Michigan, LSU, Florida State, Ole Miss, Texas and Texas A&M to name a few, but he chose to stick around his home state and committed to Georgia Tech.

In his two years in Atlanta, Gibbs rushed for 1,206 yards and eight total touchdowns. Those numbers might not jump off the page, but it's important to call out he only played seven games as a freshman due to the COVID-19 affected season in 2020. That being said, what separates Gibbs is his ability as a receiver. During the same time frame, he recorded 59 receptions for 768 yards and five total touchdowns. Last season, Gibbs' 91.5 receiving grade only trailed Georgia's Kenny McIntosh (92.1), according to Pro Football Focus. He also handled kick return duties and took a 98-yarder to the house against Boston College last season.

Alabama's offense is going to be unfair with Jahmyr Gibbs this season. #RollTide pic.twitter.com/ksoVUrWuZB

The 5-foot-11, 200-pound running back's versatile abilities have the Alabama locker room pumped for what he'll bring to this year's squad.

What to Expect From Gibbs at Alabama

Alabama players are impressed with what they've seen from Jahmyr Gibbs this offseason.

??"Jahmyr has been doing great. So fast, so elusive, gets in and out of his cuts so quick. I?ve never guarded a back like him before." ? Henry To?oTo?o

Linebacker Will Anderson Jr. and 2021 Heisman Trophy winner Bryce Young, arguably the two best players in the country, have sung Gibbs' praises since he arrived on campus.

Anderson noted how Gibbs' receiving abilities separate him from other running backs and make him a matchup nightmare for linebackers.

"He's like a little wide receiver sometimes," Anderson Jr. said during SEC Media Days. "You have to take those wheel routes on him and stuff like that, you really get on your horse because he's got wheels and he can run. He's dangerous out of the backfield, but I love it. It's fun to watch."

Of course, Young is thrilled to have another dynamic receiving option. Previous Alabama backs have all been studs on the ground -- and don't get me wrong, Gibbs is, too -- but only Harris comes close to his abilities as a pass-catching threat. Even then, Gibbs has him beat.

"Jah is super explosive, super dynamic, and he's really smart," Young said. "He understands the offense really well, even in the short time that he got here and he's been here. Back when he got here, it felt like he's been here for most of the year, that's how well he understood the offense. Smart not just in running the ball and receiving out of the backfield but also protection, too. He knows where he always needs to be. I'm super excited to watch him, to play alongside him. It's been really fun just being able to play with him and practice."

It's fitting that Gibbs will don No. 1, the same number Jameson Williams wore last year. Williams broke out after transferring from Ohio State. Gibbs has all the tools to do the same.