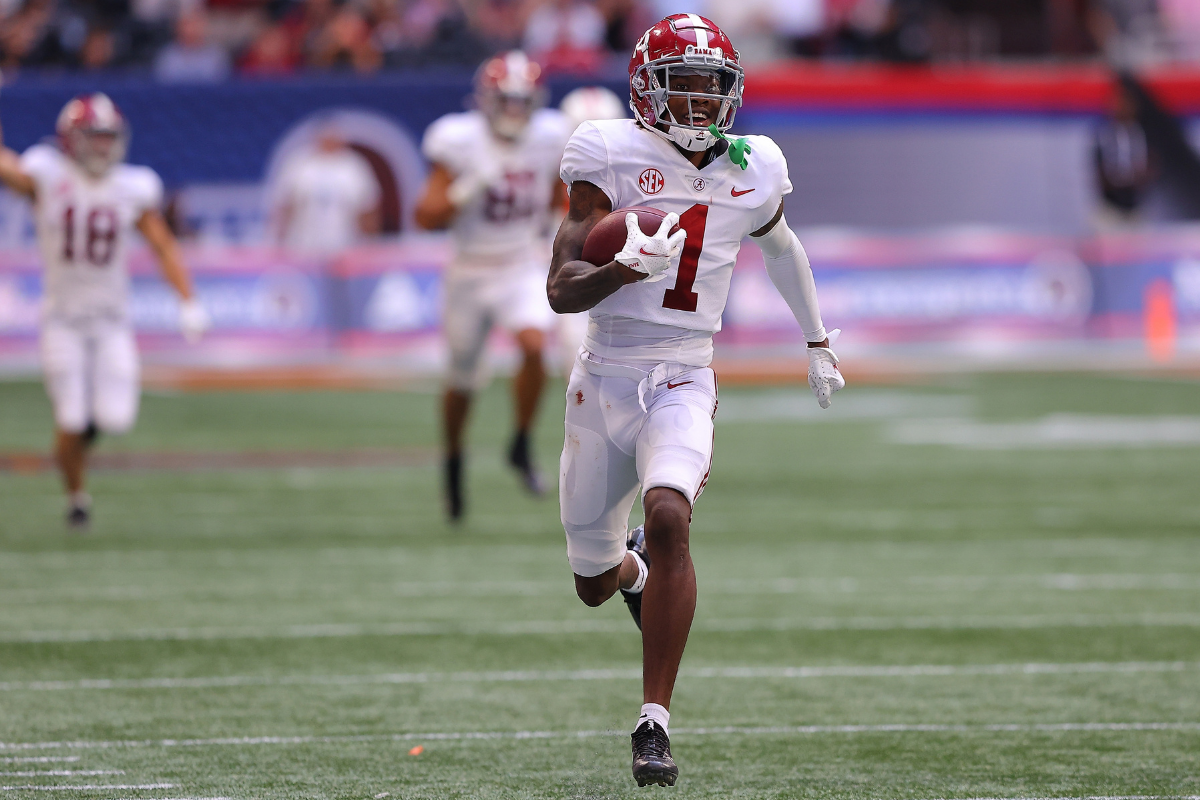 Jameson Williams flies by the cornerback, then the safety and finds open space downfield. Quarterback Bryce Young places the ball in his receiver’s breadbasket. Another big play for the Alabama Crimson Tide.

Much like Bruce Springsteen, the star receiver was born to run. He comes from a family made up entirely of track stars, and he’s the first to take the Williams family speed from the track to the gridiron.

That last touchdown my #6 WR Jameson Williams from St. Louis. That kid was a BEAST in track and field:

What do you get when your mom and dad meet on their high school track team? A family who only knows how to go fast.

Jameson’s mother, Tianna, used to race against the boys during high school track practice. His father, James Sr., ran at the collegiate level for Abilene Christian University. Tianna and James Sr. went on to have four kids — all of whom ran track in college except Jameson.

Jameson, the third of the bunch, quickly set his sights on first. His desire to outrun his siblings started in parking lots.

“When Jameson was a little kid, he’d always want to race his big brother and big sister,” James Sr. told Rivals. “He’d always try to race them to the car from the store. It wasn’t very competitive then because they were a lot bigger than he was, but that never stopped him from giving his all.”

By the time he was in fourth grade, Jameson started beating his sister, who was 15. He’s rarely lost a foot race. In high school, he broke the Missouri state record in the 300-meter hurdles previously held by Dallas Cowboys running back Ezekiel Elliot. On the football field, he breaks the spirits of any defender who tries to keep up with him.

Williams’ college football career is in high gear at the University of Alabama, but it started off slow at Ohio State.

He was the 13th-ranked receiver in the 2019 recruiting class, according to the 247Sports Composite rankings.

The wideout played in four games as a freshman, snagging six receptions for 112 yards and a touchdown. In his sophomore campaign, he appeared in every contest — including the College Football Playoff National Championship Game against his current team — and grabbed nine receptions for 154 yards and two scores.

Williams’ father publicly voiced his disappointment in his son’s lack of playing time in Columbus. He took his comments to the ideal place for civil discussion — Instagram — and claimed OSU was playing favorites in the receivers room.

Williams entered the NCAA Transfer Portal on April 28, 2021. Four days later, he committed to the Crimson Tide. The former Buckeye explained his decision to BamaOnLine:

“It’s Bama because I felt the want and need of my skill from Coach (Nick Saban) as he explained everything to me,” Williams said. “And I also had a great relationship with Coach (Holmon) Wiggins from the previous years. He made it most definitely feel like a place that I could be.”

Upon arriving in Tuscaloosa, Williams did what he knows best: he hit the ground running.

He caught four passes for 126 yards in the season opener against Miami, including a 94-yard touchdown catch, and turned into Young’s favorite deep threat. Through nine games, Williams has hauled in 45 receptions for 870 yards and seven receiving touchdowns. His seventh score was a 58-yard bomb that saw him leave LSU defenders in the dust. It was one of his 10 catches on the day that also included saving a tipped ball off teammate Slade Bolden near the end of the first half.

The Alabama football player’s incredible season has launched him up NFL Draft boards. He’ll have scouts at the edge of their seats when he runs the 40-yard dash at the combine.

The difference between Jameson Williams and his predecessors is his elite speed is something you just can’t teach.

MORE: Nick Saban’s “Make Them Quit” Speech Against LSU Gets the Adrenaline Pumping