The NCAA's new name, image and likeness rules that went into effect on July 1, 2021, ushered in a new era of college athletics.

Years of debate over the issue of whether college athletes should be able to make money have been put to rest. Most importantly, we got EA Sports' "NCAA Football" series back and I couldn't wait to start my dynasty.

No player seems to have benefited more from these rules than Alabama Crimson Tide quarterback Bryce Young, who was making a lot of money before even starting a game as Alabama's signal-caller. 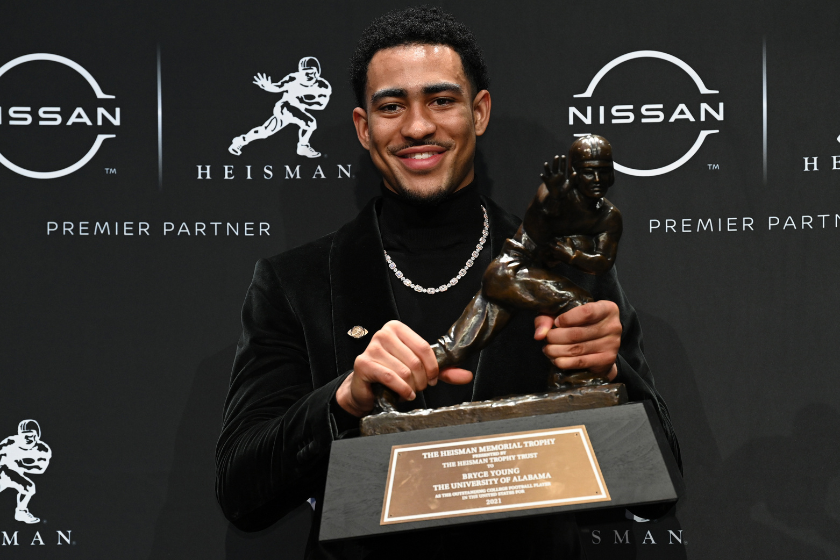 Alabama coach Nick Saban wowed the college football world at SEC Media Days in July of 2021. Yes, he subtly reminded us that 'Bama will probably win the next 100 national championships by his mere presence and that the College Football Playoff expansion is actually a determent because it cuts into his recruiting season.

What Saban really surprised reporters with is how much his starting quarterback was expected to earn in endorsement deals.

"Our QB has already approached ungodly numbers, and he hasn't even played yet. If I told you what it is...it's almost 7-figures," said Saban.

Bryce Young hasn't even started a game for Alabama, but he's already cashing in on NIL deals ? https://t.co/JpXgphLJmL

Per 247Sports college football writer Chris Humer, Saban said the quote at the Texas High School Coaches Association convention the day before his SEC Media Days session, but the story went viral when he took the podium in Hoover.

ESPN's Alex Scarborough reported that Young, who wasn't directly named by Saban but can be safely assumed was the player he was talking about, had inked more than $800,000 in deals.

When he was named Alabama's next man up under center, Young's only public deal was with Cash App. It was reported that he also had deals with trading card and memorabilia companies Leaf, Wild Card and Onyx. Young is a client of Creative Artist Agency (CAA), one of the biggest entertainment agencies in the world, which is probably how he landed a NIL Deal with BMW of Tuscaloosa in 2022.

Thrilled to sign my first partnership as a college athlete with @CashApp ! Excited to team up with them this year! Lookout for some great content coming later this summer - ? go get your $cashtag

Oh yeah, at the time he signed these deals, Young had only thrown 22 passes in his college career and had yet to start a game. That's insane.

It's absolutely no coincidence the Alabama football head coach casually slipped in the tidbit on the national stage. The man is already a recruiting master, and adding the fact that players can make close to a million dollars before even starting a game is a trump card.

The 2021 Heisman-winning quarterback spent his first year in Tuscaloosa backing up New England Patriots QB, and Tom Brady replacement, Mac Jones. The former five-star recruit is effective with his arm and his feet and seemed to put Alabama in a prime position to defend its national title. Unfortunately, Young and the Tide fell to Georgia in the National Championship game, but there's not doubt they'll be back competing for another Natty soon enough.

This article was originally published on August 11, 2021, and has been updated since.

MORE: Nick Saban's Coaching Tree May Be His Greatest Achievement