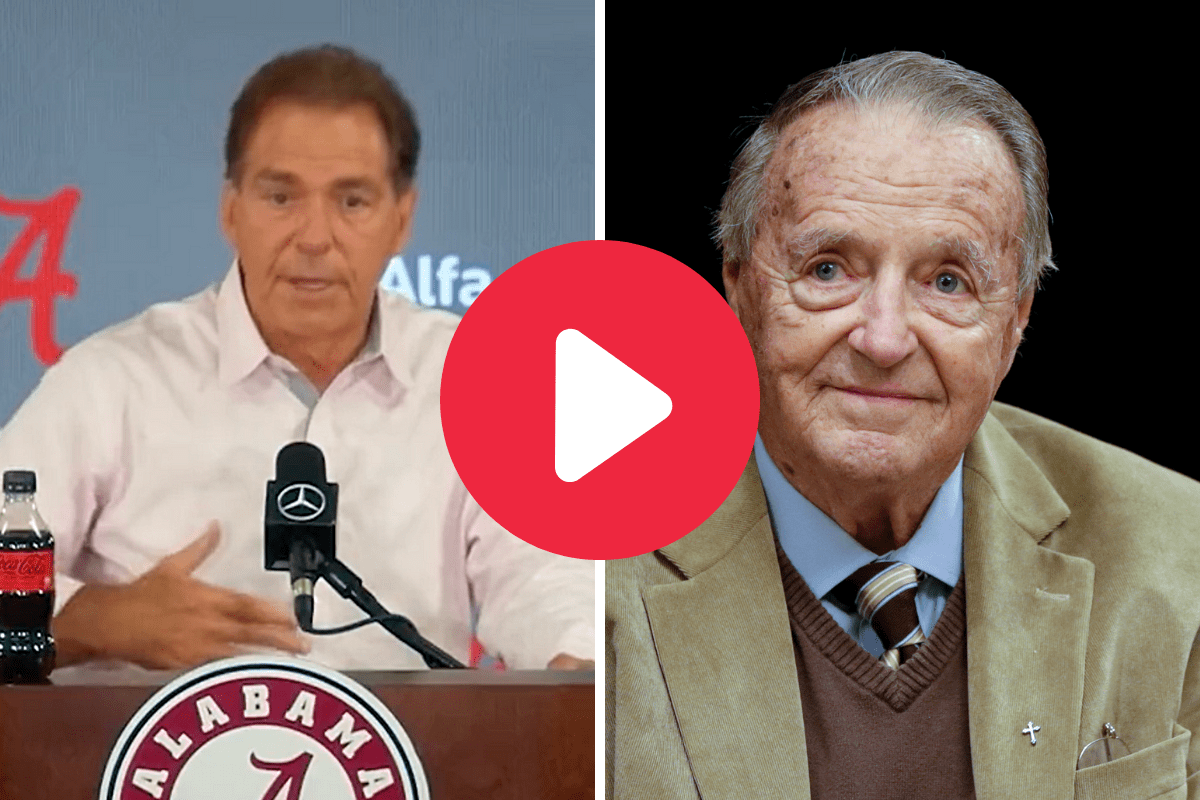 Bobby Bowden passed away at the age of 91 after a battle with pancreatic cancer, and another college football coaching legend offered his condolences by telling a touching story about the former Florida State Seminoles head coach.

Alabama coach Nick Saban said that when his dad, Nick Saban Sr., died in 1973, Bowden ? then the West Virginia head coach ? picked up the phone, dialed Saban’s number and offered to help his family.

Bobby didn’t know Nick, but he knew his dad, who raised his children in West Virginia.

Nick Saban shares his favorite memory he had with Bobby Bowden pic.twitter.com/hBWgr15zuo

Saban told reporters on Sunday morning that he grew close to Bowden over the years, complimenting the College Football Hall of Fame member’s tremendous character.

“Bobby Bowden was a wonderful friend whose accomplishments as a coach are only surpassed by the character and class he displayed as a husband, father, mentor and friend. His passing is a loss for everyone but should be seen as a chance to celebrate a life remarkably well lived. Sometimes it’s not what you do, but who you are that is truly important, and no one embodies that more than Bobby Bowden.

“His influence on the countless young men he led in over 60 years of coaching can never be measured. His achievements as a coach are well documented and among the greatest the game has ever known, but when I think about coach, it’s about the man he was and the impact he had on everyone he encountered. I probably understood that impact even earlier than the rest of college football,” Saban said in a statement.

Then, the seven-time national championship-winning coach told a heartwarming story.

After Saban’s dad died, Bowden heard his mother might be having a hard time, so he offered young Nick (who was a grad assistant at Kent State) a spot on his coaching staff at West Virginia University if he needed to be closer to his mom, Mary Saban.

Rest In Peace to a Legend. pic.twitter.com/Iysy2hXtrj

“My father passed away while Coach Bowden was at West Virginia University. Coach didn’t know me from Adam’s house cat, but he knew my dad and got word that maybe my mom was struggling a bit back home in West Virginia.

“I pick up the phone one day and it’s Coach Bowden himself. He tells me he knew my dad and said that if I needed to be closer to home, he would make a place for me on his Mountaineer coaching staff. How many coaches would do that? How many people would do that?

“For me, that story is the personification of the true character of Bobby Bowden. Our thoughts and prayers are with his wife Ann and children Terry, Tommy, Jeff, Ginger, Steve and Robyn.”

That was long before Saban dominated at the helm of Alabama football. He was practically a nobody back then, yet Bowden was still offering to help his family.

Bobby Bowden won 377 games (second all-time in NCAA Division I history behind Joe Paterno) across 40 years as a head football coach, most notably with the FSU football team. He won two national titles in Tallahassee and 12 ACC Championships before Jimbo Fisher took over for him in 2010. His son, Terry Bowden, coached at Auburn and now Louisiana-Monroe. His other son, Tommy Bowden, last coached the Clemson Tigers in 2008.

Anytime you get a chance to hear a story between two college football legends like these two, you savor it. Rest in peace, Bobby Bowden.