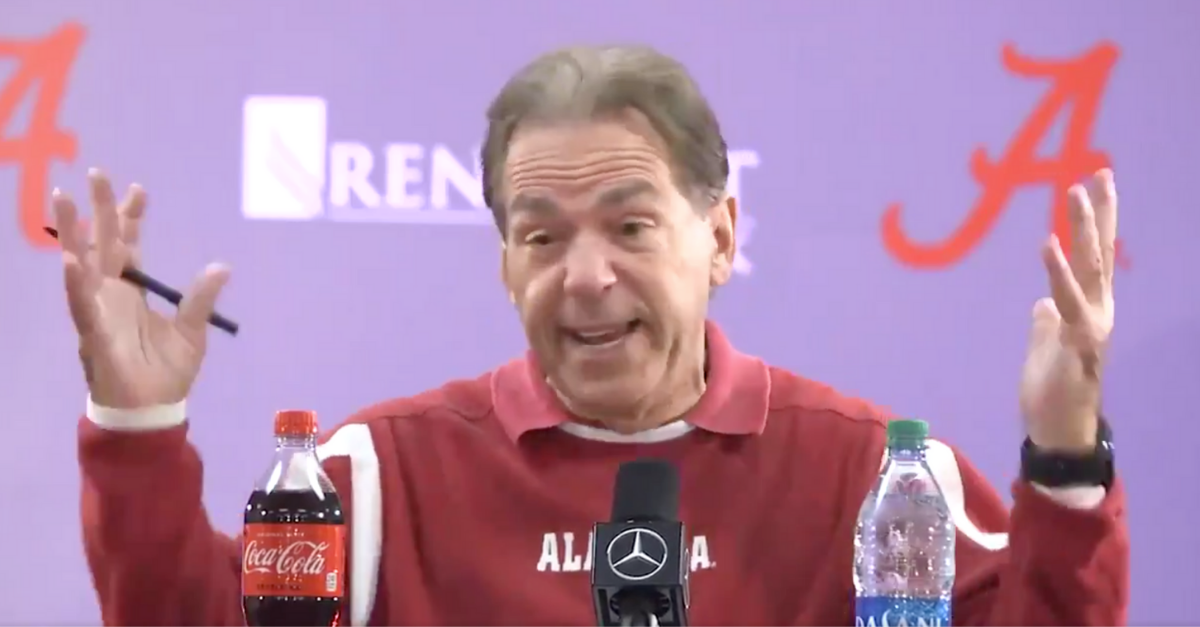 Alabama Crimson Tide head coach Nick Saban is a great many things. He’s charitable, sharp as a tack, and a soon-to-be grandfather for the second time. The six-time national championship winner commands respect from every corner of the SEC and college football world, but when you get on his bad side, a very scary version of Nick Saban comes out to play.

During his weekly press conference in preparation for No. 1 Alabama’s game in Tuscaloosa against the Arkansas Razorbacks, only one topic really mattered. With Heisman Trophy candidate Tua Tagovailoa sidelined after undergoing a “tightrope” procedure on his ankle, redshirt sophomore Mac Jones takes over as the Tide’s starting quarterback. That obvious ascension from primary backup to starter didn’t stop one reporter from asking about Taulia Tagovailoa, Tua’s little brother, and the chance he plays on Saturday.

Sure, this sounds like a completely normal and valid question at the surface. However, the way it was phrased stirred the demons of Saban’s soul, and he unleashed an epic rant before storming off the podium in disgust.

Reporter: “Will there be an effort to get Taulia [Tagovailoa] into the game just to expedite his progression?”

"We're gonna play everybody who can expedite winning the game…that's what we're gonna do!" 👊🎤⬇️

Do NOT ask Nick Saban about backup QBs this week. pic.twitter.com/iJbx4rJpUg

You can smell Saban’s sarcasm from 100 yards away, but honestly, what a dumb question to ask.

In all likelihood, considering Arkansas hasn’t beaten this Alabama football dynasty since 2006, and the Tide hung 65 points on Chad Morris’ team last year, the younger Tagovailoa could see some late-game snaps.

But using an SEC game to “expedite” progression? C’mon now.

This is a College Football Playoff contender trying to make a statement. Saban and his staff prepare week after week to play the best football they can. They’ll “progress” young talent during practice and the offseason, even if this is a conference game against the SEC’s doormat.