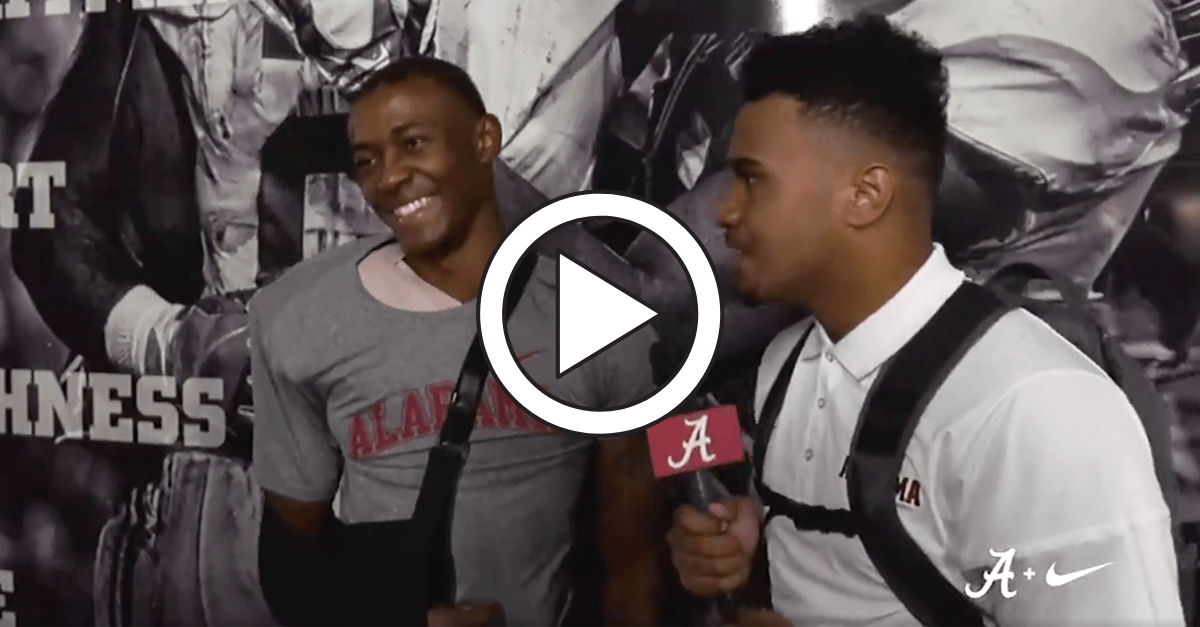 Since then, the speedster from Louisiana has been part of the possibly the greatest collection of wide receivers that a college football team has ever had. Jerry Jeudy, Henry Ruggs III, Jaylen Waddle and Smith will all get picked in the NFL Draft, and all of them could star on any college team in America. Naturally, it’s hard standing out when these are your peers, but Smith did that and more in Saturday’s win over the Ole Miss Rebels.

With 274 receiving yards and five touchdowns catches, Smith smashed two Alabama football records. Amari Cooper had held the single-game yardage record (224) since 2014, and Smith’s five receiving touchdown were two more than any Crimson Tide player ever. For context, Al Lary first set the record with three touchdown catches back in 1950.

Smith had eight catches for 221 yards and four touchdowns in just the first half.

He finished with 11 receptions, which, aside from completing the trifecta of career-highs, earned Smith every award imaginable, including SEC Offensive Player of the Week and Walter Camp National Player of the Week.

It was a record-breaking afternoon for the former five-star prospect. Smith’s now delivered two of the greatest moments in Alabama football history, and that’s no small feat considering receivers like Julio Jones played for the university. His five touchdown receptions also tied the SEC record, which he now shares with LSU’s Carlos Carson (1977), Vanderbilt’s Earl Bennett (2005), and South Carolina’s Sidney Rice (2006).

After the game, Smith was mobbed with reporters wanting a piece of his mind, but the best postgame interview came from the other record-setting player on Alabama’s high-powered offense.

Heisman Trophy candidate quarterback Tua Tagovailoa broke his own Alabama record with six touchdown passes against the Rebels. That tied with A.J. McCarron’s record for career passing TDs (77) at the school. Tagovailoa also tied the SEC single-game record with seven total touchdowns in the game.

The most hard-hitting questions Smith faced following the game, obviously, came from the southpaw quarterback himself.

Smith and Tagovailoa knocked down a few school records, but at this rate, plenty more are going to fall in Tuscaloosa before the team’s SEC schedule and 2019 season are finished.