Amari Cooper Set a Ridiculous, Impossible Goal for the 2019 Season 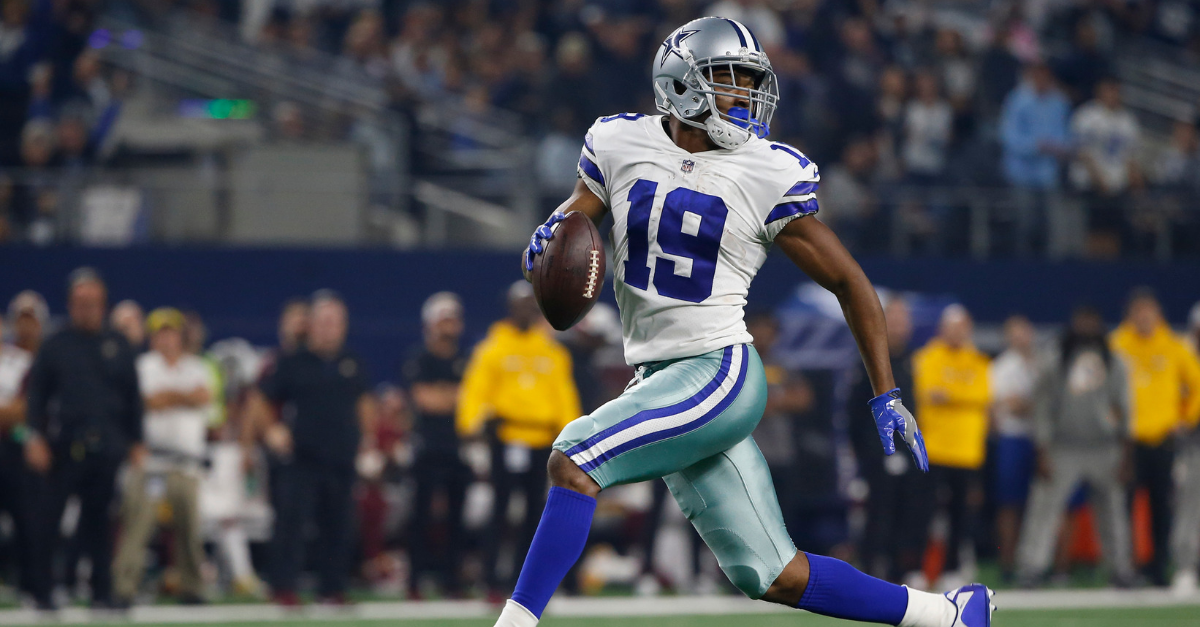 That’s how one writer categorized the trade that sent former Oakland Raiders wide receiver Amari Cooper to the Dallas Cowboys for a first-round pick in the 2019 NFL Draft. That pick turned into safety Johnathan Abram for Oakland and delivered one of the league’s best receivers to Texas.

After catching only 22 passes in six games with Oakland, the former No. 4 overall pick out of Alabama caught 53 balls for 725 receiving yards and six touchdowns in nine games with the Cowboys. The 24-year-old earned his third Pro Bowl selection, caught seven passes for 106 yards in a Wild Card playoff win over the Seattle Seahawks, then balled out in a Divisional Round loss to the Los Angeles Rams (six catches, 65 yards and a touchdown).

Do you know how many wide receivers picked in the first round since 1990 reached at least three Pro Bowls in their first four seasons?

There are four of them: Randy Moss, A.J. Green, Odell Beckham Jr. and Amari Cooper.

Unless Johnathan Abram is the second-coming of Ed Reed, the Cowboys robbed the Raiders.

Amari Cooper on why the Cowboys have been a “perfect fit” for him:

“It’s like I was a piece of the puzzle that was needed. … I can only thank God that I was brought here to be a Dallas Cowboy. … It just seems like everything fell in place here.” pic.twitter.com/4LDjS0kRWg

But what’s the return on investment for Cooper entering the final year of his rookie contract? Dallas needs to decide if quarterback Dak Prescott is worth the $34 million a year he wants, plus they need room for Ezekiel Elliott’s next deal without handicapping the team.

If Cooper’s stats after nine games are any indication, he could very well give Dallas something it hasn’t had in years: a big-time playmaker on the outside.

During an interview with Mike Florio of Pro Football Talk, Cooper said how “the change of scenery was really necessary” after he left Oakland and new coach Jon Gruden. Cooper added that when Khalil Mack was traded to the Chicago Bears, no one in the Raiders locker room felt “safe,” which probably contributed to Oakland finishing 4-12 last year.

But when Florio asked Cooper about his expectations in 2019 during a contract year, Cooper said something that made the PFT host actually laugh out loud. Here was the exchange:

Florio: “You had 1,000 yards last year between the Raiders and the Cowboys. I assume your goal this year is at least 1,000. What’s the next number? One-comma-what? What’re you shooting for?”

Cooper: “Oh, you gotta put a two in front of that.”

Let’s put this in perspective. The NFL record for receiving yards in one season is 1,964 set by “Megatron” Calvin Johnson back in 2012. Only six players have ever reached at least 1,700 receiving yards, and all of them either are, or will be, in the Pro Football Hall of Fame.

I love Cooper’s enthusiasm, but is 2,000 yards actually possible in that offense? Let’s pump the breaks just a bit.

Amari Cooper's percentage of targets that were deemed catchable (per PFF):

Knowing how explosive Cooper was with the Cowboys last season, there’s no reason why he won’t do exactly the same this year. Cooper told PFT that he and Prescott are working out together this offseason before training camp begins in late summer, and he’s set up to be Dallas’ go-to threat in 2019.

Cole Beasley is gone, but his slot receiver role was filled by long-time Green Bay Packers receiver Randall Cobb. Opposite Cooper, second-year man Michael Gallup appears ready for a breakout season after 507 receiving yards as a rookie. Allen Hurns is back, but he’s recovering from a dislocated ankle. Jason Witten came out of retirement, but he’s older than almost everyone in Dallas’ locker room.

The rapport with Prescott is obvious, so Cooper could very well become a top-10 fantasy football receiver with a full season in Jason Garrett’s system. Cooper’s caught at least 70 passes three times, reached the 1,000-yard mark in each of those seasons, and is only getting better with his route-running and catching the football at a high-rate. (Last season’s 70.1 catch percentage ranked seventh among all WRs with at least 100 targets.)

The 6-foot-1 wideout might be shooting for Jupiter with his 2,000-yard prediction, but the table is set for him to definitely become “the man” down at AT&T Stadium.

Cooper will be off your fantasy football draft board in the third round by the time WR12 or WR13 comes. If you don’t grab him by then, you’ll have to watch him tear up the NFC East all season long.