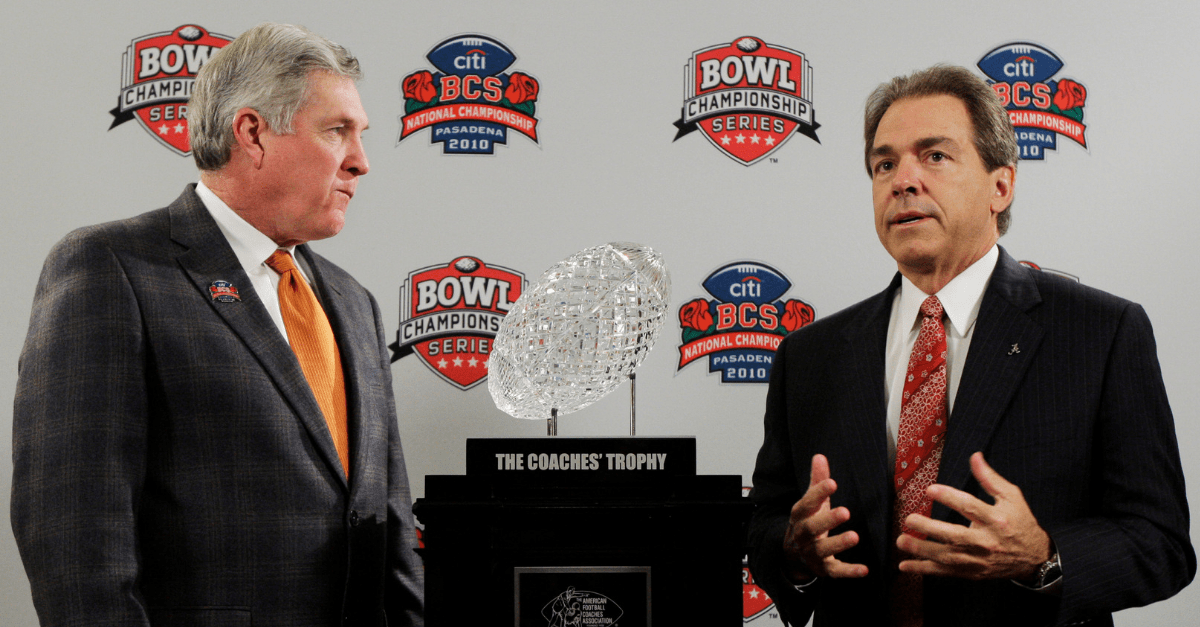 The Green Bay Packers had Vince Lombardi. The UCLA Bruins had John Wooden. The New England Patriots have Bill Belichick. The Mighty Ducks had Gordon Bombay.

Every sports dynasty has one thing in common: a legendary head coach. Having superstar players and a relentless fan base are only small pieces of the puzzle, and the biggest piece is the master of puppets who’s pulling the strings. (And now, here’s Metallica.) Alabama Crimson Tide head coach Nick Saban entered that conversation as one of the greatest coaches in sports history when he won his sixth national championship back in the 2017 season. But according to a new report, Saban almost never brought that title to Tuscaloosa. In fact, he was probably one meeting away from not being there at all.

Former Texas regent Tom Hicks told a story during his recent appearance on Your Turn with Corby Davidson that, while working for the Longhorns, Saban’s agent Jimmy Sexton reached out to Hicks and inquired about Alabama’s head coach potentially taking over for Mack Brown back in 2013.

“Another regent and I had the conversation with [Jimmy Sexton] and he said, ‘If Saban was a business guy, he’d be what you would call a turnaround artist. He’s not a longterm CEO. He likes to go some place, fix it, win and go on. He knows he will never catch Bear Bryant’s legacy in Alabama, but he’d like to create his legacy that he’s won national championships at more schools than anybody else. He’s already done it at LSU and Alabama, and he knows he can win a national championship at Texas; he knows he can.”

Hicks continued, saying that two days later he went to lunch with Mack Brown, who’d been “telling people he’s going to leave” the school. Brown’s job was already in jeopardy for a few years, but it climaxed with the 2012 season when Texas lost to Oklahoma by 42 points, the third-straight year the Sooners won the Red River Rivalry. The writing was on the wall for a change to happen, especially considering Mack Brown only won the Big 12 Conference twice (2005, 2009) since arriving.

At that lunch, Hicks told Brown about his conversation with Sexton and Saban’s interest in Texas’ head coaching job.

“‘If you want to retire, I think you can graciously have Nick Saban come in and take your place and have it be your idea,'” Hicks told Brown. “‘That might be a nice way for you to end it.'”

The next season, Texas went 8-5, got creamed by the Oregon Ducks in the Alamo Bowl, and Brown resigned as head coach of the Longhorns.

The grasp Mack Brown had on the University of Texas football program is hard to ignore. From 2001 to 2009, the Longhorns never won fewer than 10 games, posted a 101-16 record, and went 7-2 in postseason bowl games, including winning the legendary 2006 BCS National Championship Game. Brown was a God amongst men in Austin, Texas. So much so that his influence on the program’s next head coach was more important than the opinions of administrators who would actually be there.

Charlie Strong ultimately replaced Brown, went 16-21, and was fired after three seasons. Tom Herman and Texas finished No. 9 in the final AP Poll to close the 2018 season, the team’s highest finish since Texas lost the 2010 national title game… to Nick Saban and Alabama.

SEC stalwart Paul Finebaum wrote in his book that Texas was prepared to offer Saban a $100 million contract.

Talk about one of the biggest “What If?” stories in college football history, huh?