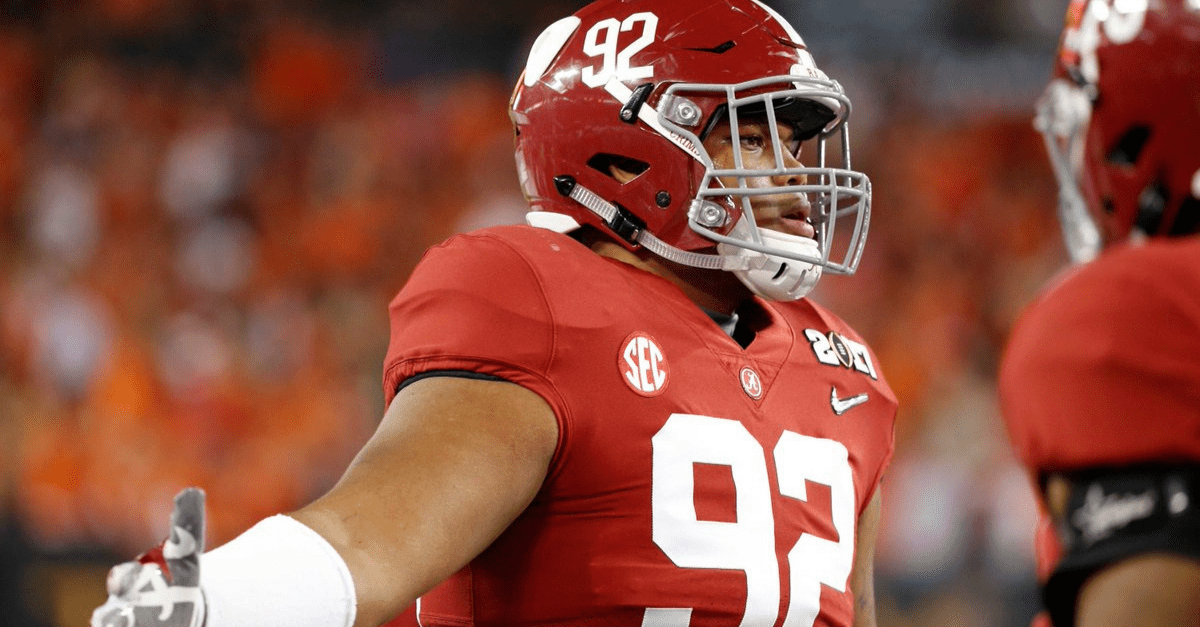 The question plaguing college football continues to be if anyone can unseat the mighty Alabama Crimson Tide. Year after year, they churn out elite NFL talent and rack up national accolades for the program. This season is no different, except its biggest star happens to be the team’s best kept secret.

Well, it’s hard to keep a secret when you’re 6-foot-4 and weigh 295 pounds, but Alabama defensive tackle Quinnen Williams has come from nowhere to earn national praise, and he’s now in the running to potentially be the No. 1 overall pick in the 2019 NFL Draft.

According to ESPN NFL Draft whiz Mel Kiper, Williams is flying up his draft board and is now a serious prospect to be selected with the top overall pick. Kiper says the redshirt sophomore is “closer to [Rams All-Pro lineman] Aaron Donald than I think [Houston Cougars defensive tackle] Ed Oliver is.”

Coming from a football nerd, understand that reference in this way: Quinnen Williams might be the best defensive player in the country.

“Williams has been killing double teams. He’s a big effort guy. Great hand usage. He combines power with quickness. Quinnen Williams, the nose tackle for Alabama, has done a heck of a job and has really been the difference-maker up front for the Crimson Tide.” — Mel Kiper on SportsCenter

After dominating as an All-State player at Wenonah High School, Williams came to the Crimson Tide in 2016 as a unanimous four-star recruit and being ranked the No. 4 player in Alabama, according to 247Sports. After taking a redshirt his first season, Williams played all 14 games last year, racking up 6.5 tackles for a loss and two sacks while sharing snaps with 2018 NFL draft picks Da’Ron Payne, Da’Shawn Hand and Joshua Frazier.

Quinnen Williams plays like a linebacker who weighs 300 pounds. He’s strong, he’s instinctive, he’s fast as hell, and most importantly, he’s playing so well that he’s actually getting votes for the Heisman Trophy alongside teammate Tua Tagovailoa.

Already racking up 49 total tackles, 14 tackles for a loss and five sacks through Alabama’s perfect 10-0 start to the season, Williams’ play is starting to garner national attention. He was named a Bronko Nagurski Award finalist, which is annually given to the top defensive player in college football by the Football Writers Association of America.

After his breakout game of the season saw him gobble up 10 tackles, 3.5 tackles for loss and 2.5 sacks against the LSU Tigers, Williams is officially on the map as one of the best players in all of college football.

Regardless how this season ends for the Crimson Tide, it’s a guarantee that big No. 92 is going to be involved in that outcome before he moves to the NFL level.

READ MORE: High-Profile Alabama Commit Does It All in District Playoff Win