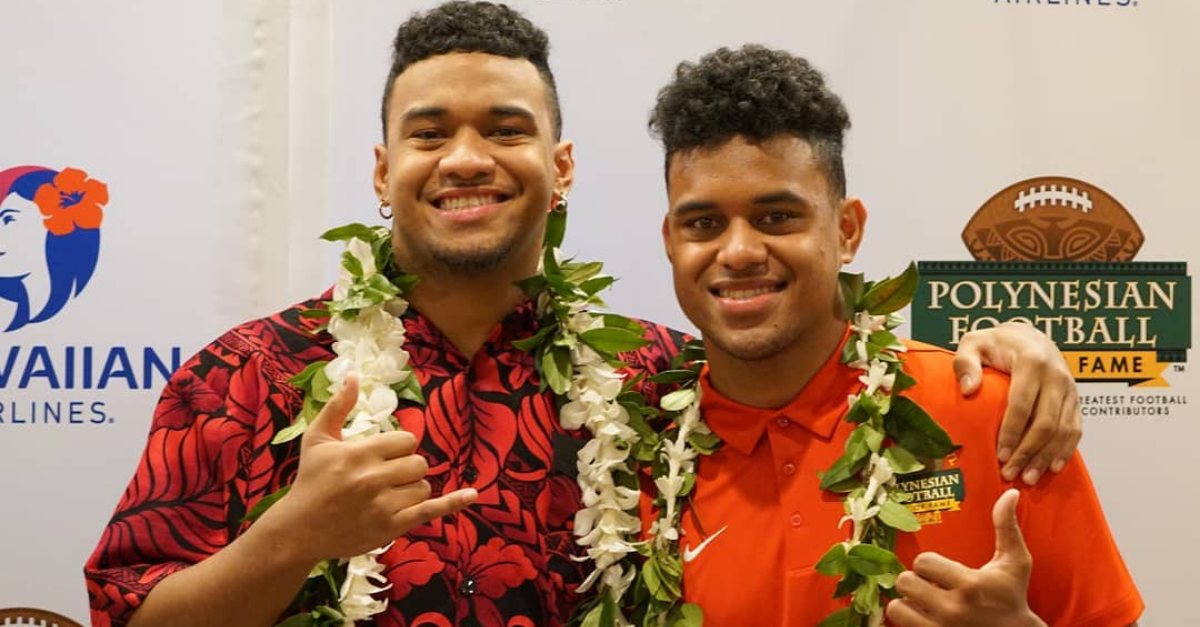 Fear not, for as long as the NCAA Transfer Portal and a Whataburger drive-thru are open for business, there’s still plenty of college football to talk about deep in the heart of winter. Nowhere is football more important than Tuscaloosa where the Alabama Crimson Tide are still mulling over their College Football Playoff national championship game defeat at the hands of the Clemson Tigers.

Head coach Nick Saban’s team is working to piece together a coaching staff for the 2019 season ahead, and incoming recruits are starting to file in for the spring semester and winter workouts. One of those players is Thompson High School (AL) quarterback Taulia Tagovailoa, who is the little brother of star Alabama quarterback Tua Tagovailoa. Aside from just being the younger sibling, Taulia is coming to camp ready to push his big brother for the starting QB job next season.

At 5-foot-11 and 215 pounds, four-star quarterback Taulia Tagovailoa is basically a carbon copy of his brother. They were both top-tier quarterback prospects coming out of high school. Plus, both were honored by the Polynesian Bowl this year ? Tua was named the Polynesian Football Hall of Fame College Player of the Year while Taulia played in the annual All-Star game at Aloha Stadium.

The biggest difference between the two? Tua throws left-handed, while Taulia throws with his right.

After the younger Tagovailoa completed 13 of 24 passes for 166 yards, one touchdown pass and two interceptions at the Polynesian Bowl in Honolulu, Hawaii, he managed to sneak in a silent jab at big brother.

One of Taulia’s teammates asked after the game, “Tell them right now: are you going to beat your brother out for the [starting QB] spot?”

“Tune in,” he said, flashing a sneaky grin as he walked off camera.

After the kind of senior season that Taulia Tagovailoa and his Thompson Warriors team had, it’s hard to doubt that the kid could come in and elevate his brother, and the entire Alabama football quarterback room, in a hurry.

Thompson, which is coached by Mark Freeman, finished their 2018 season with an 12-2 record after reaching the Alabama Class 7A State Championship game. They’d lose that game to LSU quarterback commit Peter Parrish and the Central Red Devils, 52-7, but Tagovailoa left early after lingering effects of a shoulder injury he suffered the previous game.

Taulia closed his high school career completing 63.6 percent of his passes for over 7,500 passing yards, 71 touchdowns, and 13 interceptions as a junior and senior. At The Opening Finals, an annual showcase of the best high school football talent in the country, Tagovailoa won the long toss competition when he heaved a ball 66 yards in the air.

It’s going to be near impossible to supplant the Heisman Trophy runner-up after the monster season Tua put up in 2018, but Taulia joins Trussville (AL) quarterback Paul Tyson as newcomers to the ‘Bama quarterback room. With Mac Jones scheduled to backup Tua early in the season, it’s unlikely the younger brother would really push for the starting job in his first season playing in the SEC.

But then again, crazier things have happened to the Tagovailoa family.