Alabama and LSU QB Commits Battled for a State Title, and Guess Who Won 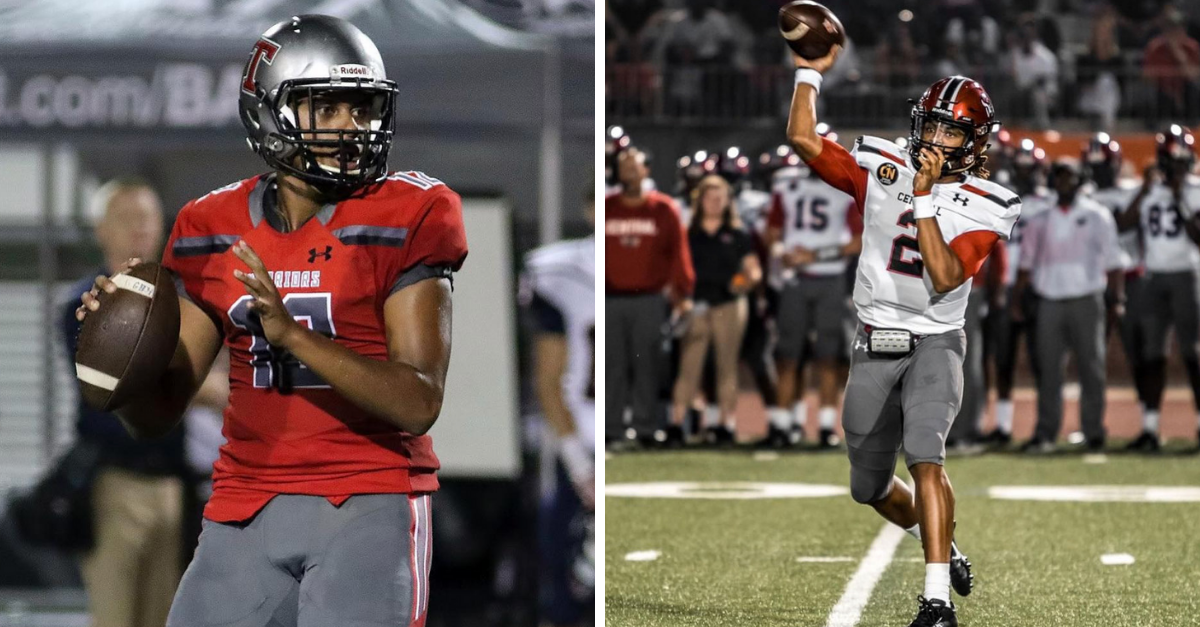 The Alabama Class 7A State Championship pitted the Central Red Devils against the Thompson Warriors, and it showcased two of the state’s most-prized quarterback recruits going against each other. This game had bigger implications than just a classic state title matchup, as these two QBs are going to be playing against each other for the next few years.

It was Central quarterback Peter Parrish, an LSU Tigers commit, facing off against Thompson quarterback Taulia Tagovailoa, who will join his brother with the Alabama Crimson Tide next season. In a preview of a future SEC showdown, it was the Tigers who bested the Crimson Tide this time around.

Peter Parrish, the 13th-ranked player in Alabama according to 247Sports, capped the Red Devils’ perfect 14-0 season by finishing the game with 11 carries for 100 yards and one touchdown, while completing 5-of-9 passes for 78 yards and another score in the championship game.

Central’s defense dominated from start to finish, too. Led by Clemson Tigers commit Ray Thorton, who took an interception 68 yards for a touchdown, the Red Devils kept Tagovailoa in check all game in what ended up as the worst night of his high school career.

The Alabama commit went 7-of-11 for a career-low 44 passing yards. He also totaled minus-11 rushing yards thanks to four sacks by the Central defense. Tagovailoa played the game with an injured shoulder, which he sustained in the semifinal game against the Hoover Buccaneers. After exiting for just one series earlier in the title game, Tagovailoa left the game for good after Central built a 38-0 lead in the third quarter.

The younger brother of Alabama quarterback Tua Tagovailoa made no excuses as his injured right arm remained mostly immobile during after the state title game on Wednesday night.

RELATED: Taulia Tagovailoa Goes Off for 507 Yards and 4 Touchdowns

Thompson High School (12-2) may have watched their season fall short of their goal, but head coach Mike Freeman called Taulia “one of the toughest kids I’ve ever coached.”

On the other side of the coin, Central-Phenix City head coach Jamey DuBose’s undefeated season ends with the school’s first state championship under his leadership. While this is the third state title as a high school coach for DuBose, this one might be the sweetest.

“There?s a lot of questions,” DuBose said. “A lot of people think we?re in Georgia, I think. You never hear about us. We?re hidden.”

Thanks to a stellar performance this year by dual-threat quarterback Peter Parrish and this vaunted Central defense, the top-ranked team in the state of Alabama certainly isn’t a secret anymore.

If this game is any indication for the backstory behind this future college football showdown, we’re in for a real treat when Alabaster and Phenix City inevitably collide down the road once again.