Professional golfer John Daly has had a rough go of things over the last few years, having revealed to the world that he is battling bladder cancer in 2020. His cancer diagnosis, which was made public information in September 2020, is troubling news for the two-time major champion and five-time PGA Tour event winner.

Well, not all news is bad, and the 57-year-old's spirits will certainly be uplifted following his son's own golf career. Following in his father's footsteps, John Patrick Daly II attends the University of Arkansas on a golf scholarship, where he inked an NIL deal with Hooters, the first NIL ambassador for the chain restaurant. Daly Sr. played golf for the Arkansas Razorbacks from 1984-87 before turning professional. If there was any chance Daly Jr would be playing on another NCAA golf team, that ship sailed a long time ago.

"John's larger-than-life personality makes him an ideal representative of Hooters' fun-loving spirit, while Little John will promote our brand to the next generation as one of the next big names in golf," said Bruce Skala, Hooters of America's senior vice president of marketing. "We are ecstatic to have the Dalys, fantastic golfers and great personalities, on board as spokespeople for Hooters, the definitive 19th hole."

There might not ever be another John Daly, but it turns out John Daly II wears crazy pants like his pops. Oh, and he can swing it. 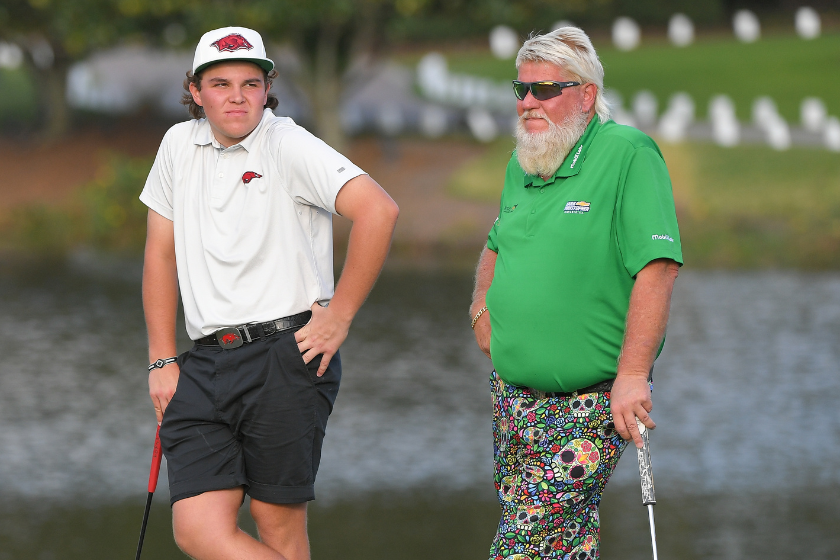 RELATED: Tiger Woods' Son Charlie Woods Could Be a Golf Star Like His Dad

Daly's 18-year-old son, "Little John" Daly II caught the eye as an amateur high school golfer, showcasing a similar skillset to his old man on the golf course. In other words, Little John can absolutely rip the ball with a golf club.

The pair have participated in the PNC Championship at the PNC Father/Son Challenge in Orlando, Florida in recent years, and, based on those results and his performance in other golf tournaments, it's safe to say Daly II has a promising future in the sport. They were back for the 2020 PNC Championship, where, per Golf Digest, the duo was slated as 20-1 odds to win the event, which was broadcasted via NBC and the Golf Channel. They finished eighth behind winner Justin Thomas and his dad, Mike Thomas.

Just a few days after Big John revealed his cancer diagnosis, Daly II was crowned champ of the International Junior Golf Tour's Fall Kickoff Event at Bishops Gate Golf Academy, where he scored a 68 after sinking a birdie putt in the final round. He also finished runner-up at the Dye National Junior Invitational at Crooked Stick Country Club in Carmel, Indiana, nearby Indianapolis, the very same venue at which Daly won the PGA Championship in 1991.

In May 2020, the elder Daly told TMZ Sports that his son had some big-time potential.

And for good measure, here's what mini John Daly's swing looks like. He can crush it.

Daly II will hope to continue heading down his father's path. He doesn't have to swing like Bryson DeChambeau or win a major like his dad -- who won the 1991 PGA Championship and the 1995 Open Championship -- to be considered successful.

He participated in his first college tournament in October 2021, and there's no doubt Big John will help coach him along the way.

MORE: John Daly's 18-Hole Diet Would Send Any Golfer Back to the Clubhouse