John Daly is as close to a real-life Happy Gilmore as the PGA Tour will ever see. The 56-year-old Dardanelle, Arkansas native is the perfect amount of rowdy, fun and athletic phenomenon as you could find in any sport. Seriously. How many other professional golfers have a PGA Championship title and a country music career on their resumé? Exactly.

But while his play on a golf course has declined over the years, Daly is still pushing the limits of what an athlete can do with their body. For Daly, that means testing just how much junk he can put in his body over a single round. 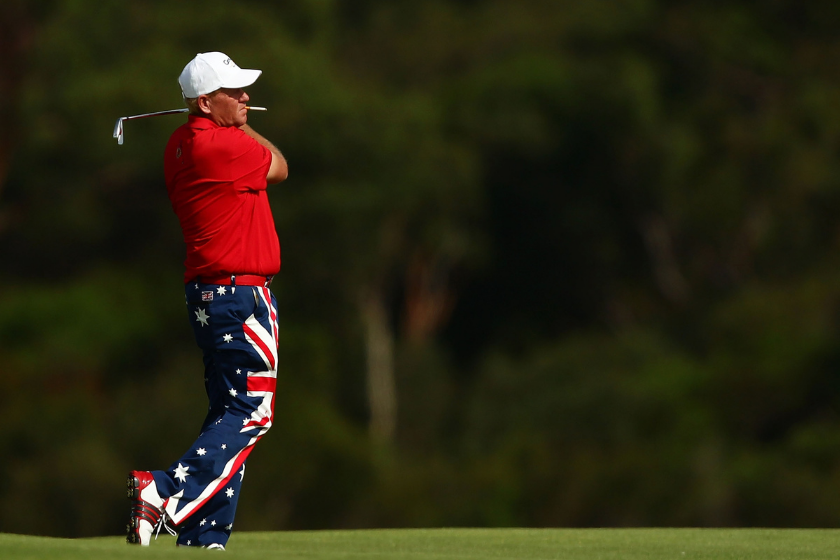 Will Brinson of CBS Sports covered the Wyndham Championship in 2008, an event that had Daly as one of the headliners. While Daly didn't make too much of a splash on the leaderboard, he did make waves by hosting a meet-and-greet in a Hooters parking lot after he had signed his first-round scorecard. At the end of the tournament, Daly would finish 50th, shooting a -6, but finishing above some other notable names like Davis Love III, Bubba Waston, Jason Day and Vijay Singh.

However, the most impressive accomplishment of Daly's came during a practice round that Brinson followed. Determined to find out "what this athletic specimen was putting in his body as he prepared to compete in a high-level professional golf tourney," Brinson took "meticulous notes every time he reached for his golf bag, took a bite or a sip or a puff."

"First few holes were just kind of eye opening," Brinson remembered on Twitter ahead of the 2022 PGA Tournament. "By the back nine I realized I was essentially watching someone pitch a perfect game."

At the end of the round, Brinson checked his notes and then probably called a doctor to check on Daly's pulse.

The final tally of literally everything he put into his body over a full 18 holes:

I don't know about you, but if I put that into my body over the course of 18 holes, I'd be on my back begging for my caddy to call my wife and tell her to meet me at the hospital. For Daly, it was just another day at work.

In all honesty, to those who are more familiar with Daly's style, 21 cigarettes almost seem like Brinson may have missed some. For the chainsmoking Daly, burning through just over a pack of heaters feels like the low end of the spectrum. Sucking down 21 cigs is child's play for Daly.

Equally unsurprising are the six packs of Peanut M&Ms. There are an average of 12 Peanut M&MS per pack, which means Daly consumed around 72 in total. Eating 72 peanuts? Good source of protein. Eating 72 plain chocolate M&Ms? That's just two regular packs. If you separate the two, Day basically consumed two packs of normal M&Ms and a bag of peanuts, which isn't all that crazy.

Twelve Diet Cokes is insane. If we're talking cans, that would mean John Daly slugged 144 ounces of Diet Coke, which is equal to just one 12-ounce can more than a gallon. Imagine drinking a gallon of Diet Coke in the hot sun and also playing a professional sport. That's a herculean task. And compound that with the fact that Daly did not drink one single ounce of water is wild. And once again, that's assuming that professional golfer John Daly was only drinking from cans, and not glasses.

This man's endocrine system has to be made of steel, because I know for sure my kidneys would be in full renal shutdown if I tried any of this. There's no way Tiger Woods nor Justin Thomas, who won the 2022 PGA Championship at Southern Hills Country Club in Tulsa Oklahoma, could pull that off. But then again, Daly not drinking water isn't news to avoid golf enthusiasts, especially after his 2021 interview with Graham Bensinger.

"I used to drink anywhere from 12 to 20 Diet Cokes a day," Daly said in 2021. "I used to go to McDonald's three to four times a day. To me, they always had the best fountain Diet Coke. You know I don't drink water. I hate water. I cannot stand drinking water."

I think I speak for all nutritionists and athletic trainers when I say this, but you should not try this Man vs. Food challenge unless, of course, you've won the 1991 PGA Championship. And even then, you might have more luck winning The Masters than completing the "John Daly Gallon Challenge."

Hats off to you, John Daly. Not many can live life in the fast lane like Big John.