Golf is one of the only sports that doesn't require athletes to look like Greek gods. You don't have to run fast or have bulging biceps or even tree trunk legs. John Daly is Exhibit A of that. It helps to have some insane calves like Phil Mickelson or some veiny forearms like Tiger Woods in his prime.

It doesn't hurt to have some mass behind a golf swing. Professional golfer Bryson DeChambeau is learning that is truer and truer every day. The 26-year-old from Modesto, California, already has eight professional wins and made history in 2015 when he won both the NCAA and U.S. Amateur titles, joining an exclusive list of Jack Nicklaus, Phil Mickelson, Tiger Woods and Ryan Moore.

DeChambeau has been a staple on the PGA Tour over the last few years. During that time, the 6-foot-1 golfer has hovered around 200 pounds. After quite the transformation since 2019, DeChambeau now stands a beefy 240 pounds after a pretty wild diet and training regimen.

Bryson DeChambeau Before and After Pics 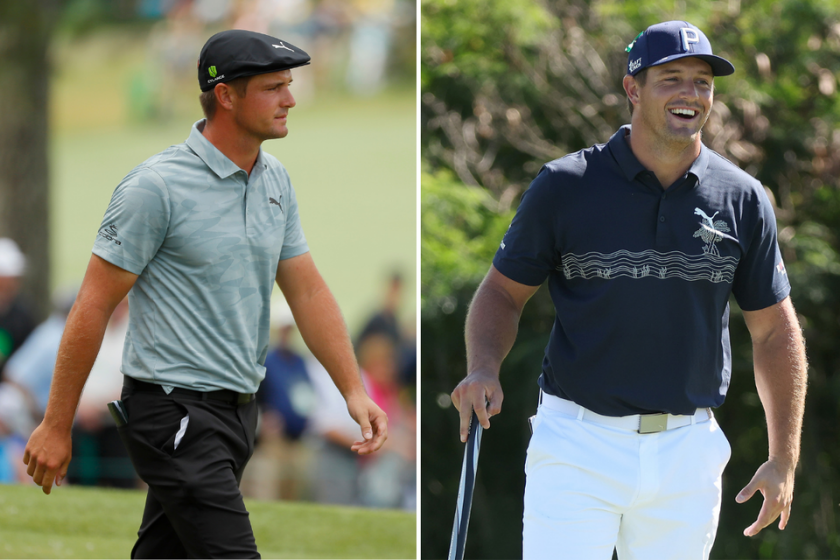 Like most of the American people in quarantine, DeChambeau has gained weight over the course of the coronavirus pandemic. Big deal, right?

DeChambeau has put on some solid muscle during the PGA Tour's lockdown thanks to COVID-19. He turned heads in June when he returned to the golf course some 50 pounds heavier than he was last year. He ripped a 367-yard drive at Colonial Country Club's Charles Schwab Challenge in June 2020. The five-time PGA Tour winner then won the Rocket Mortgage Classic at the Detroit Golf Club on July 5, 2020, thanks to some booming drives (and a fit of rage directed at a cameraman) that helped him take down Matthew Wolff in the final round.

According to DeChambeau in an interview with Men's Health, improving his driving distance is the reason he's put on all this weight in his body transformation over the offseason.

"Eight months ago I said, you know what, I want to try and get stronger, because I know there's an advantage to be gained," DeChambeau told the publication. "If I could be like Happy Gilmore or Kyle Berkshire, hitting over 400 yards and hitting it straight? That is a massive, massive advantage. So I set out to do that, and I've been healthier and stronger ever since."

Right, so how did the "Mad Scientist" actually achieve these goals?

According to his trainer, Greg Roskopf, DeChambeau has been eating anywhere from 5,000 to 6,000 calories every day to help gain more than 40 pounds of muscle. Roskopf, who works with the NFL's Denver Broncos, has never seen anything like what the golfer has been able to do with his body.

According to the New York Post, his diet is basically just a bunch of protein shakes. Here's what it looks like on a typical day:

"I've never seen the type of changes in an athlete like the ones he's made in this last six-month period," Roskopf told ESPN while shooting down the notion that DeChambeau was on steroids.

DeChambeau hasn't been curling until his biceps hurt or benching a million pounds. His workouts have centered around improving his grip strength.

"I actually had to get my wrists stronger," DeChambeau told USA Today's Golf Week in December 2019. "I had to train, do farmer walks, 70 pounds in each hand and move them like that when I walk to get my grip strength up. Did a lot of pull ups with just the fingers, holding on with the palm, just doing a couple other things, inflexion, flexion stuff, internal, external rotation of the wrist."

The result has been DeChambeau pummeling some of the longest drives of his career. The World No. 7 has also seen his swing and ball speed increase on his tee shots. He uses a driver with a loft nearly the same degrees as most putters to help him drill fairways.

Other players have taken notice of his transformation.

DeChambeau has faced his fair share of criticism for his new-age analytic style of play. From slow play and lengthy green reads to his constant mathematic conversations with his caddie, some players have found DeChambeau's method detrimental to the game. At one point, DeChambeau was using a protractor during rounds to determine hole locations and the PGA straight up banned the use of them during play. Even the wind is something DeChambeau analyzes in real-time. During the 2021 PGA Tour, he impressed the media with this gem:

"You guys are going to eat this one up, but the laminar flow of the wind and how it works, there are certain times where over certain dune hills and stuff on greens and before the greens where the wind will flow down and up and over certain mounds, so that's going to make it feel weird, play different, and it's just going to affect how the ball goes."

Laminar flow? That's one that you'll definitely need to google.

In an interview with GQ, DeChambeau discussed more in depth how he wanted to seemingly live forever.

"I mean, my goal is to live to 130 or 140. I really think that's possible now with today's technology. I think somebody's going to do it in the next 30 or 40 years. I want humans to be better. I want them to succeed. I want to say, 'Hey, this is all of the stuff I've experienced that helped me do my best. If it helps you, great. If it doesn't, well, let's keep working on it. Let's keep figuring stuff out.' That's my take on life."

As major golf returns to San Francisco's TPC Harding Park in August for the PGA Championship, expect to see a very bulky Bryson DeChambeau when his tee time rolls around. You can also expect him to be right up next to heavy hitters like Rory McIlroy, Dustin Johnson, Rickie Fowler and Brooks Koepka on the leaderboard.