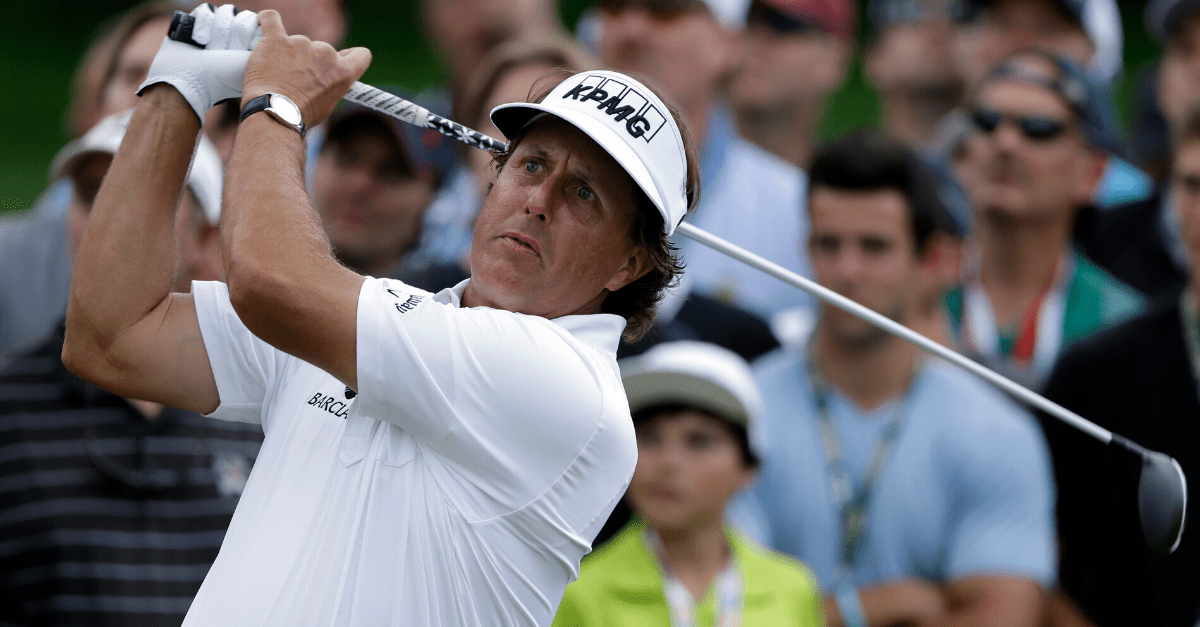 Phil Mickelson has been a legend in the golfing world for the last 30 years. “Lefty” has won 44 PGA Tour events and five major championships (still hasn’t captured that elusive U.S. Open), but somehow has never been ranked No. 1 in the world.

The 50-year-old has also become known as one of the funnier professional golfers on the tour. He’s embraced his boulder-like calves, explained how to “hit bombs” at Augusta National and once took quite the selfie with not one or two but three former United States Presidents.

Since turning pro in the 1990s, Mickelson has racked up quite the dough with his putter. The 2012 World Golf Hall of Fame inductee is one of the highest-paid athletes in the world and in the history of golf. The only current player worth more is Tiger Woods. So, how did Mickelson find the “green” throughout the years?

After graduating from ASU in 1992, Mickelson immediately turned professional. He hired Jim Mackay to be his caddy, a choice he stuck by for 25 years.

Throughout the 1990s, Mickelson established his name. He won numerous PGA Tour tournaments, including the Byron Nelson Golf Classic and the World Series of Golf in 1996 and the AT&T Pebble Beach National Pro-Am in 1998. Mickelson didn’t capture his first major championship until his 13th year on the PGA Tour, when he defeated Ernie Els at the 2004 Masters.

Mickelson’s golf career briefly seemed to be in jeopardy in 2010. He was diagnosed with psoriatic arthritis and announced he had begun treatment and transitioned to a vegetarian diet.

Unsurprisingly, all those wins have translated to whole lot of dollars. He’s won $91 million in career prize money, according to Forbes, a figure that trails only Woods.

Mickelson’s biggest payday came in 2018, when he defeated Woods in a winner-take-all, pay-per-view event dubbed “The Match.” Lefty took home a whopping $9 million for the entertaining victory.

He teamed up with NFL quarterback Tom Brady against Tiger Woods and Peyton Manning to raise money for COVID-19 relief in ?The Match: Champions for Charity” in May 2020 at the Medalist Golf Club in Hobe Sound, Florida, right next to where Michael Jordan’s new golf course lies.

The bulk of Mickelson’s net worth comes from his endorsement deals.

Forbes reported that the left-hander has netted $700 million over his career in sponsorship deals alone. The American people love Phil, and they apparently buy whatever he puts his face on.

Of course, he’s appeared in plenty of commercials. None are greater than this Mizzen+Main spot, in which he gets his boogie on and DOES THE WORM.

According to Golf Digest, Mickelson profited $1 million in August 2012 off trading information he received from Bill Walters, who essentially worked as Mickelson’s bookie for years. When news initially broke, many thought Mickelson could end up in hot water.

Mickelson, however, avoided legal trouble for the incident because Walters — who received information from a company first-hand source — was considered a second-hand source to Mickelson.

Mickelson’s gambling habits are also well-documented. That same Golf Digest article alleges he and a group of partners won more than $500,000 on a 2001 Super Bowl preseason bet. The pro golfer also cashed in on the Arizona Diamondbacks’ win over the New York Yankees in the 2001 World Series.

He’s had to settle some lofty debts as well. In 2012, Mickelson forked over $1.95 million to cover a gambling-related debt. That would be a knockout punch for any average Joe, but that was chump change for Mickelson.

Mickelson met his wife, Amy Mickelson, in 1992. She attended Arizona State as well and was a member of the Phoenix Suns cheerleading squad. Phil had already won the Northern Telecom Open as an amateur the year before and made a name for himself.

He and Amy have three children together. Amanda Mickelson was born in 1999 and currently attends Brown University. Sophia (2001) and Evan (2003) are still in high school.

In 2020, Mickelson said that he and his family would be moving to South Florida. They plan on building a house and joining Michael Jordan’s new, private golf club in Hobe Sound.

What Is Phil Mickelson’s Net Worth?

Google “Phil Mickelson net worth” and you’ll find it may not stack up against “Tiger Woods net worth,” as the Nike darling is worth a cool $800 million, but “lefty” is definitely not hurting for money.

According to Forbes, he made $48.4 million in 2019, most of which came from off-the-course endorsements. That sum was more than Ariana Grande, James Harden or Conor McGregor made.

Phil Mickelson’s net worth in 2020 is $400 million, according to Celebrity Net Worth. That puts him high on the list next to golf legends like Woods, Jack Nicklaus and Arnold Palmer. Mickelson is still just 50 years young, so there’s plenty of time to stack up more paper. And hey, maybe he’ll even win the U.S. Open.