United States Presidents have been throwing out ceremonial first pitches for more than 100 years. Since William Howard Taft fired a strike toward home on Opening Day of the 1910 Major League Baseball season, nearly every president since has continued the tradition of showing off his arm strength at an MLB game. Only one commander in chief, Donald Trump, never took the mound while sitting in office.

While it's true nobody threw out first pitches quite like George H.W. Bush, his son and former President George W. Bush comes in at a close second. Bush, a legend in the state of Texas known for his array of athletic abilities including on the diamond, could whizz a fastball like very few presidents.

President George W. Bush's greatest moment in sports, however, may have come when he was a 55-year-old navigating the first year of his presidency in 2001. President Bush threw out the greatest ceremonial first pitch in the history of America's Pastime and it's not even close.

Terrorist Attacks and the 2001 MLB Season 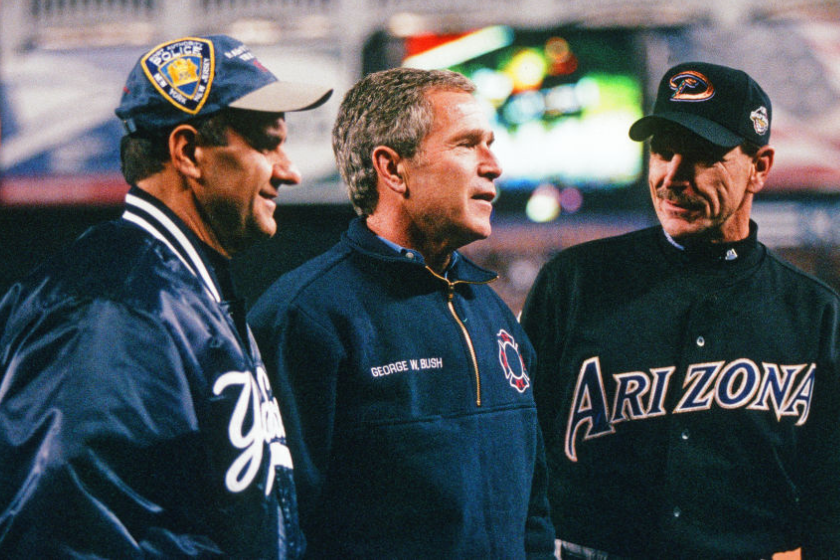 Sept. 11, 2001 was the most devastating day in American history. Terrorist attacks to the World Trade Center and the Pentagon in New York City killed more than 3,000 people and left the entire country in shambles.

MLB canceled its games immediately following the attacks, but league officials and fans knew the sport might be the best way to heal from such a horrid event. As a result, play resumed and baseball's regular season and postseason were pushed back a bit.

The New York Yankees had advanced to yet another Fall Classic after posting the best record in the American League East, and they were pitted against the Arizona Diamondbacks of the National League.

The Diamondbacks won both of the first games played, leaving Yankee fans with a bleak outlook on the rest of the World Series on what was already a dreadful two months.

That's when George Bush stepped to the mound when the nation needed him most.

?Don't bounce it, they'll boo you.? -Derek Jeter to President George Bush before game 3 of the 2001 World Series pic.twitter.com/iM1X3ZuRsb

Bush's security officials actually wanted the president to throw the first pitch at either Game 1 or Game 2 in Phoenix, Arizona, arguing that it was much safer. Bush, however, stood firm on his decision. He was taking the mound in New York, and he wasn't taking no for an answer.

On Oct. 30, Bush made his way to the Bronx in Marine One for Game 3 in Yankee Stadium. The leader of the free world had earlier that day just visited first responders who were working at the World Trade Center.

When Bush arrived to the Yankees clubhouse, secret service gave him a bulletproof vest to wear for the pitch. He then covered the bulky, armored article of clothing with a FDNY jacket and began to warm up. He wasn't fond of the protective vest but understood.

"Hey man, I've got to throw the pitch. You wear the bulletproof vest," Bush told ESPN he joked. "Their job was to protect me and therefore I wanted to make their job easier not harder."

Afterward, Bush went to the batting cages to throw some warm-up pitches. None other than The Captain himself, Derek Jeter, walked in and greeted the president.

Jeter suggested to President Bush that he throw from on top of the mound, otherwise the thousands of Yankee fans inside the stadium would boo him. Bush agreed to do so and was prepared for his moment before Jeter offered him one more bit of advice.

"He turns around and says, 'But don't bounce it, or they'll boo you,'" Bush told ESPN.

It's safe to say there were absolutely no boos or negative comments.

Bush walked from the dugout to the mound to a thunderous ballpark applause and the crowd cheering, "U-S-A! U-S-A!" He embraced the chant and responded with a thumbs up.

In one swift motion, Bush reared back and fired a perfect strike over home plate. Fans needed it. The American people needed it. With one pitch, the President of the United States helped heal a city and a nation.

"I had never had such an adrenaline rush as when I finally made it to the mound," Bush told MLB.com. "I was saying to the crowd, 'I'm with you, the country's with you'...And I wound up and fired the pitch. I've been to conventions and rallies and speeches: I've never felt anything so powerful and emotions so strong, and the collective will of the crowd so evident."

The Yankees went on to win the baseball game, 2-1. The next night, Jeter became "Mr. November" for hitting a classic World Series walk-off home run in Game 4. New York eventually fell to the D-Backs in Game 7 on Luis Gonzalez's walk-off single.

This post was originally published on March 16, 2020, but has been republished on the anniversary of those horrible attacks.

MORE: Donald Trump Lost Out on $5.5 Billion By Not Buying The NFL's Dallas Cowboys